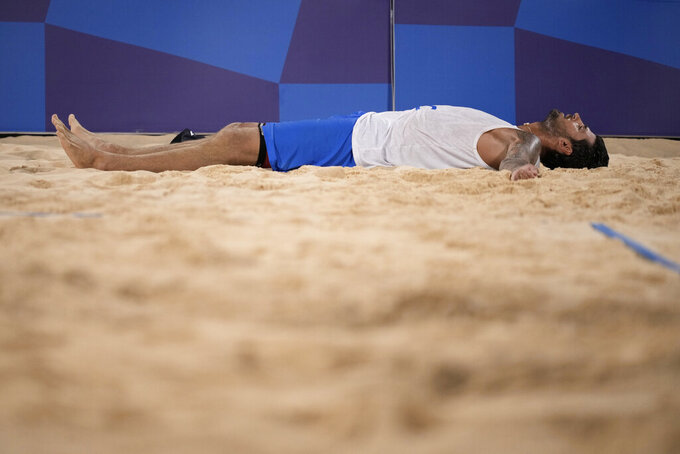 Viacheslav Krasilnikov, of the Russian Olympic Committee, lays on the sand after winning a men's beach volleyball semifinal match against Qatar at the 2020 Summer Olympics, Thursday, Aug. 5, 2021, in Tokyo, Japan. (AP Photo/Felipe Dana)

TOKYO (AP) — Anders Mol and Christian Sorum will be bringing an Olympic medal back to Norway.

Not in speed skating, biathlon or Nordic combined.

“I don’t think we actually believe this news,” Mol said after beating Latvia in the semifinals on Thursday night to earn a spot in the gold medal match and clinch no worse than a silver.

“We have a medal in the Olympics and we’re frickin’ Norwegians,” he said. “We’re not supposed to take gold in beach volleyball. We’re supposed to ski, you know? But now we’re so proud. ... And this is really a victory for the whole Norwegian volleyball community.”

For the record, there are plenty of beautiful beaches in Norway, and the FIVB international tour makes an annual stop in Stavanger. But the water temperatures top out at about 60 degrees (16 Celsius) in August, so its no wonder that the Norwegians have more than twice as many medals in the Winter Games than the Summer Games and hadn’t ever won a medal in beach volleyball.

This year, though, the Norwegians will collect more beach volleyball medals than Brazil, which had never failed to claim at least two spots on the men’s or women’s podiums but was completely shut out in Tokyo.

It’s the first time since the inaugural Olympic beach tournament in 1996 that there hasn’t been a team from Brazil in the men’s championship match. ("Finally," Mol said with a laugh.)

The United States, which won three of the first four men’s gold medals, was also shut out on the men's side, though April Ross and Alix Klineman will play Australia for the women's gold.

“There are still really, really good Brazilian teams, Canadian teams, American teams,” Mol said. “But I think the level in Europe has been pushed really high. We train hard, and now we get things back from it.”

Russia had also been blanked on the beach. But Viacheslav Krasilnikov and Oleg Stoyanovskiy, the reigning world champions and the No. 2 seed in Tokyo, beat Qatar 21-19, 21-17 later Thursday night to advance and clinch the Russian Olympic Committee's first beach volleyball medal.

The top seed in the men’s field thanks to their performance on the pandemic-extended qualifying tour, Mol and Sorum won 21-15, 21-16. They opened a 5-1 lead and never trailed in the first set. In the second, they scored three straight points to turn a 14-13 lead into an comfortable victory.

After match point, Sorum threw his partner over his shoulder in celebration.

“After the first set, I got really tired. And I told him,” Sorum said. "And he said, ‘OK, I will step it up.' And he did. He had a lot of block points, and that was the key for our victory tonight. So I was super happy to have Anders by my side.”