New round of talks on Syria's constitution begins in Geneva 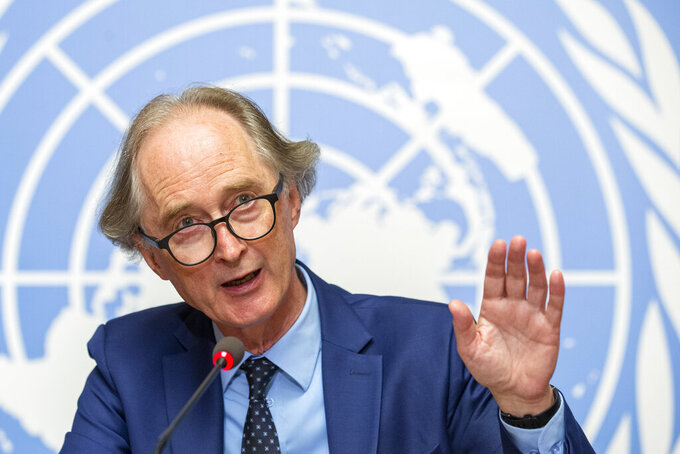 FILE - In this Aug. 21, 2020 file photo, Geir O. Pedersen, UN Special Envoy for Syria, speaks during a press conference at the European headquarters of the United Nations in Geneva, Switzerland. On Monday Jan. 25, 2021, delegations from Syria’s government, opposition and civil society started the fifth round of meetings in Geneva aimed at revising the constitution of the war-torn country. Syria’s nearly 10-year conflict has killed more than half a million people and displaced half the country’s pre-war 23 million population. (Salvatore Di Nolfi, Keystone via AP, File)

GENEVA (AP) — Delegations from Syria’s government, opposition and civil society began a new round of meetings in Geneva on Monday aimed at revising the constitution of the war-torn country.

The fifth round of the so-called Constitutional Committee came days after U.N. Special Envoy for Syria Geir Pedersen told the U.N. Security Council that many subjects have been discussed for more than a year and it’s now time for the committee to ensure that “the meetings are better organized and more focused.”

Syria’s nearly 10-year conflict has killed more than half a million people and displaced half the country’s pre-war 23 million population, including more than 5 million refugees mostly in neighboring countries.

“I believe that we need to ensure that the committee begins to move from `preparing’ a constitutional reform to `drafting’ one, as it is mandated to do,” Pedersen said last week.

The United States and several Western allies have accused Syria’s President Bashar Assad of deliberately delaying the drafting of a new constitution to waste time until presidential elections are held this year and avoid U.N.-supervised voting as called for by the U.N. Security Council.

According to Syria’s elections law, presidential elections are scheduled to take place between April 16 and May 16, at least 90 days before Assad’s seven-year term expires. Assad has been in power since 2000.

At a Russian-hosted Syrian peace conference in January 2018, an agreement was reached to form a 150-member committee to draft a new constitution, which took until September 2019. A 45-member committee known as the “Small Body” started its meetings in Geneva on Monday.

Monday’s meeting involved 15 people from each delegation and was taking place amid measures to prevent the spread of coronavirus.