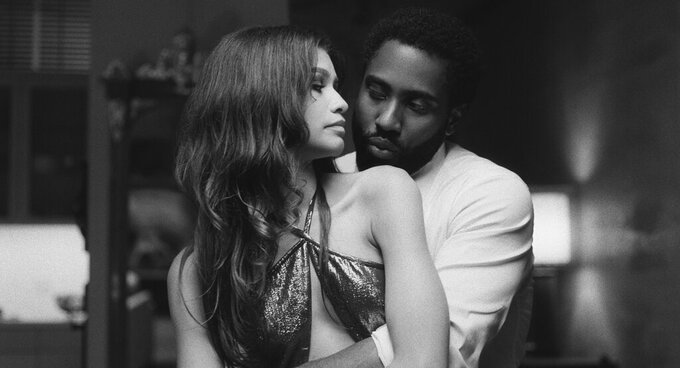 This image released by Netflix shows Zendaya, left, and John David Washington in a scene from "Malcolm & Marie." (Netflix via AP) 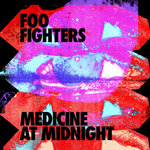 — It’s the beginning of the month, so there are quite a few films that have been added to every service in addition to the brand new fare. HBO Max on Friday will debut “Earwig and the Witch,” the first fully computer animated film from the Japanese animation powerhouse Studio Ghibli. Directed by Goro Miyazaki (Hayao Miyazaki’s son), “Earwig” follows a 10-year-old orphan girl who gets some unconventional adoptive parents. It’s an adaptation of a Diana Wynne Jones novel, the same author behind “Howl’s Moving Castle.” The service also now has the Austin Powers and Matrix trilogies, “Love & Basketball” and “The Graduate.”

— Netflix’s big offering this week is one of the highest profile pandemic productions thus far. From “Euphoria” creator Sam Levinson (who is also the son of “Diner” director Barry Levinson), “Malcolm & Marie” (available Friday) stars John David Washington as a film director and Zendaya as his actor girlfriend on one tense and passion-filled night after a movie premiere. With nods to Cassavetes and quite a few things to say about film critics, “Malcom & Marie” is sure to be a hot topic of discussion. You could also go for a Leonardo DiCaprio double feature with the just-added “Inception” and “Shutter Island” or maybe some lighter Julia Roberts fare with “My Best Friend’s Wedding” and “Eat, Pray, Love,” all available now.

— Also coming Friday to Amazon Prime Video is “Bliss,” a sci-fi from director Mike Cahill (“I Origins,” “Another Earth”) in which Salma Hayek tries to convince Owen Wilson that he’s living in a simulation. Until then, you can tide yourself over with “Dazed and Confused,” “Moulin Rouge” or “Coming to America” before the sequel drops in March.

— Foo Fighters’ 10th album was originally supposed to be released last year but was one of many projects delayed due to the coronavirus pandemic. But on Friday the Grammy-winning rockers will drop their 9-track effort “Medicine at Midnight,” which features the singles “Shame Shame,” “No Son of Mine” and “Waiting on a War.” The album was produced by Greg Kurstin, who helped the Foos on their last full-length release, 2017’s “Concrete and Gold,” as well as writing and producing for Adele, Sia, Kelly Clarkson, Beck, Maren Morris and more stars.

— The family of Fela Kuti – the late Nigerian musician and political agitator who fascinated millions and had fans around the world – is keeping his rich legacy alive. Fela’s son and grandson, Femi Kuti and Made Kuti, will release a double album called “Legacy +” on Friday. Femi played saxophone in his father’s band in the late ’70s and later created his own band called Positive Force. Made followed in his father’s footsteps, playing bass and saxophone in his father’s band. “Legacy +” is made up of Femi’s album “Stop the Hate” and Made’s debut “For(e)word.”

— Latin boy band CNCO are looking to the past on their new album, tackling popular songs from Latin artists in the ’80s, ’90s and 2000s. “Déjà Vu,” out Friday, features the quintet covering tunes like Enrique Iglesias’s “Hero,” Ricky Martin’s “El Amor de Mi Vida” and Luis Fonsi’s “Imagíname Sin Ti.” In the music video for “Tan Enamorados,” a cover of Ricardo Montaner’s 1988 hit, CNCO even pay tribute to fellow boy band New Kids on the Block by revisiting scenes from the veteran group’s video for ”(You’ve Got It) The Right Stuff.”

— “The New York Times Presents,” an documentary anthology series, continues its first season with “Framing Britney Spears,” airing 10 p.m. EST Friday on FX and Hulu. The film delves into the court conservatorship that has steered the pop star’s life and career for more than a decade and pitted her against her father, who has a central role in the legal arrangement. Interviews with members of Spears’ inner circle are included in the film, but the most passionate moments involve the fans who are part of the #FreeBritney movement.

— “Peanuts” puppy Snoopy gets top billing in “The Snoopy Show,” an Apple TV+ animated series debuting Friday on the streaming service. The self-confident beagle will play himself and his even bolder alter egos, including hip student Joe Cool; the Masked marvel, and the WWI flying ace and nemesis of the Red Baron. Aimed at children 4 to 11 and adults with good taste, each episode will include three, seven-minute cartoons. Also along for the ride: Charlie Brown, Lucy and Linus and more members of the “Peanuts” pack.