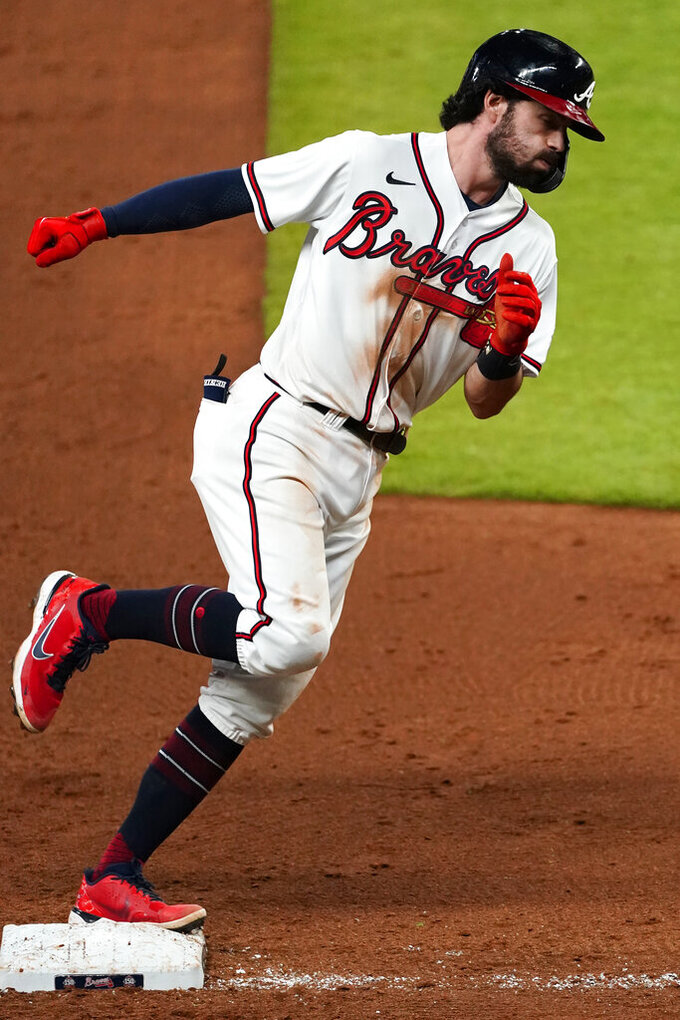 Atlanta Braves' Dansby Swanson rounds third base after hitting a home run during the sixth inning of the team's baseball game against the Pittsburgh Pirates on Thursday, May 20, 2021, in Atlanta. (AP Photo/John Bazemore) 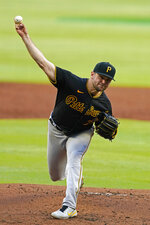 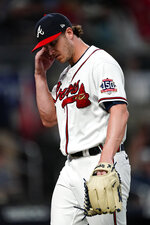 ATLANTA (AP) — Everything seems to be going right for Adam Frazier these days, so he's trying to keep his superstitions in check.

Whatever he's doing has worked thus far as the Pittsburgh Pirates second baseman leads the NL with 58 hits and has hit .386 in 83 at-bats with eight doubles in his last 20 games since April 28.

Frazier said he's even careful to put his toothpaste and toothbrush in the same spot to begin each day.

“I put my pants on every day when I come to the field, which foot I put on the bench to tie my cleats first because I don’t tie my cleats until I get out in the dugout," he said. “To what bat cubby I put the helmet in, to what batting glove I put on first, to spray my hands with the stick stuff first. Then if I doesn’t work for a few at-bats, you change it.

"And if that works, then you keep going."

Kevin Newman hit a tiebreaking single in the 10th inning, Frazier had four hits and the Pirates beat the Atlanta Braves 6-4 on Thursday night.

With the score 4-all and Ben Gamel starting the 10th on second base under the pandemic extra-innings rule, Frazier singled Gamel to third off Jacob Webb (1-2) and Newman singled for a 5-4 lead.

Atlanta, winner of the last three NL East titles, has lost seven of 10 and dropped to fourth place at 20-24. Braves manager Brian Snitker is grateful his team is only 3 1/2 games out of the division lead.

“Yeah, absolutely," Snitker said. “It could be a lot worse, but we’re a winning streak from being in first. If we get on one little winning streak, which we haven’t been able to do yet, we could find ourselves in first place. We’ve just got to keep fighting it because we have a lot of baseball left, a lot of time to get really good."

Richard Rodríguez (3-0) pitched two perfect innings, for Pittsburgh, which is last in the NL Central and stopped a three-game skid.

Jacob Stallings hit a two-run homer in the first against Drew Smyly, who gave up three runs and six hits in six innings. Smyly struck out Gamel in the third to strand the bases loaded.

William Contreras' three-run homer put the Braves ahead in the second, but Bryan Reynolds tied the score with a solo homer in the sixth.

Dansby Swanson, who had three hits, homered off Wil Crowe in the bottom half for a 4-3 lead, and Frazier retied the score with an RBI single in the seventh.

Smyly singled for his first big league hit in the fourth, ending an 0-for-33 slump.

Pirates starter Crowe gave up four runs, seven hits and three walks in five-plus innings. He struck out Freddie Freeman to leave the bases loaded in the fourth.

Crowe has been amazed watching Frazier hit so well this season.

“What Frazier is doing is awesome," Crowe said. “It’s a testament to who he is as a worker, as a grinder. He’s someone that you love to play with. Every time he gets on, I just smile. It’s fun to watch when someone’s in groove like that, it’s so much fun to watch."

As long as his superstitions hold up, Frazier figures the results will, too.

“When you’re on time, you see the ball a little longer and you’re able to stay within the zone and not chase pitches as much," Frazier said. “I think when you make big league pitchers come into the zone, you have a better chance for success."

Pirates: Manager Derek Shelton had no update on RHP Trevor Cahill, who left Wednesday’s start at St. Louis in the second inning with a left calf injury. ... RHP Chad Kuhl (right shoulder discomfort) allowed one hit and one walk with five strikeouts as he threw 42 pitches in three innings Wednesday in his first rehab start with Triple-A Indianapolis. ... RHP Jose Soriano (elbow), recovering from Tommy John surgery, allowed no runs and one hit in three innings of a rehab assignment with Low-A Bradenton.

Braves: Snitker said there was no reason to worry that LHP Max Fried left his last start with cramping in his left hand. Fried departed after allowing one run and five hits with two walks and eight strikeouts in six innings Monday of a 3-1 loss to the New York Mets. “No, that was just an isolated thing,” Snitker said. “I don’t know, maybe he was dehydrated that particular day, but he’s been throwing and hitting. He’s fine.”