NFL 2020: Who really knows what to expect on field and off? 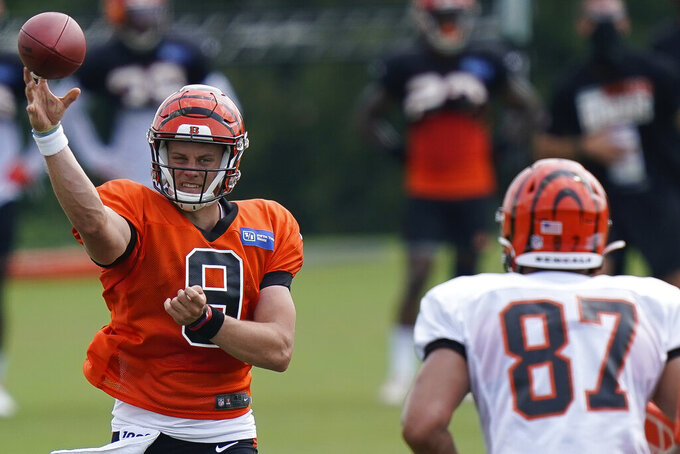 FILE - In this Aug. 26, 2020, file photo, Cincinnati Bengals quarterback Joe Burrow (9) throws a pass during NFL football training camp in Cincinnati. Teams that could struggle mightily after an offseason of constant upheaval are the Giants, Panthers, Browns, Raiders, Jaguars and Lions — all non-playoff clubs a year ago. Do not expect an easy transition for top draft pick Burrow, either. A young quarterback going to a tailender is difficult enough under normal circumstances. (AP Photo/Bryan Woolston, File)

Never has the NFL doubted it would open its season on time. For months, it has steadfastly stuck to its plans, even as the coronavirus pandemic has altered the course of every other sport — on all levels.

With its kickoff game of Super Bowl champion Kansas City hosting Houston rapidly approaching, possibly with fans in the stands, America’s most popular sport must recognize the challenges off the field could be more daunting than those on it. Particularly after 77 false positive COVID-19 tests last weekend.

“We’re going to have to be flexible and adaptable,” says Dr. Allen Sills, the league’s chief medical officer and, in 2020, for good reason, its most visible executive. "I think that’s something we’ll continue to track and monitor. If this taught us anything, projecting three, four weeks down the road is a hazardous business.”

Many would say playing a collision sport not only is hazardous but foolhardy. The NFL did have 67 players opt out of the season. But it seems the vast majority of players, coaches, executives and, for certain, owners, want to stick to the script. Even with the risk COVID-19 presents.

“I just really thought about all the things that could happen,” says Broncos star linebacker Von Miller, who has recovered from the coronavirus. "This season is different from any other season. I weighed the positives and the negatives, and I came to my own decision that I can play. I thought about me having asthma. I went over everything that I possibly could with my agent, and we just thought about it.

The NFL believes it has thought of everything it can do to provide the safest environment for its games. Still, some clubs are planning to open the gates to fans, with the Dolphins announcing plans for about 13,000 folks in the stands on Sept. 20.

Yes, there are competitive imbalance issues there, but if one municipality allows fans and another doesn't, is it up to the league to step in?

“It’s very hard," Vikings coach Mike Zimmer says. “Some stadiums, they’re allowing people in, and it looks like we’re not going to have any fans there early, which really stinks because we have such unbelievable fans, and they make that place rocking every Sunday. But the best way to have home-field advantage is to play really good: execute, make tackles, don’t make mistakes, don’t commit penalties, turnovers, all those things.”

Some teams have huge advantages heading into a season like no other, with or without anyone in the seats.

Looking for clubs with a distinct edge when the 16-game (maybe) season kicks off? Try New Orleans, Kansas City, San Francisco, Buffalo, Baltimore and Seattle. Yep, 2019 playoff teams that made few significant changes are in the best shape.

“We’ve added a few different guys player-wise," 49ers coach Kyle Shanahan says, "and we have added a couple of different coaches, but the foundation of our team and especially our defense and our defensive coordinator, that hasn’t changed. I do think that helps a lot, especially where we left off.”

Teams that could struggle mightily after an offseason of constant upheaval are the Giants, Panthers, Browns, Raiders, Jaguars and Lions — all non-playoff clubs a year ago.

Don't expect an easy transition for top draft pick Joe Burrow, either. A young quarterback going to a tailender is difficult enough under normal circumstances.

No one is traveling more of a distance, at least achievement-wise, than Tom Brady. Maybe Philip Rivers' journey from Los Angeles to Indianapolis is longer in miles, and certainly Todd Gurley's trip from LA to Atlanta is. When it comes to meaningfulness, though, the conversation begins and ends with the six-time Super Bowl champ.

At 43, when most football players are looking for tee times, not touchdowns, Brady joins the perennial underachieving Buccaneers. They last made the playoffs in 2007, a year Brady led New England to an undefeated regular season.

Although not as difficult as what Burrow faces with the Bengals, Brady recognizes there's a gamble in his move, even as he is surrounded by outstanding offensive talent.

First-time head coaches Joe Judge with the Giants, Kevin Stefanski (Browns) and Matt Rhule (Panthers) couldn't be taking over non-playoff teams in a worse situation. It won't be a walk-through to the postseason for the Dallas Cowboys newcomer with the strong Green Bay resume, Mike McCarthy.

Dan Snyder's team seemed to be on a good path, hiring a prime-time coach in Ron Rivera, disposing of the nickname with racial overtones, and hiring the first Black team president in the NFL. Unfortunately, Rivera announced he has a form of skin cancer, making his in-season contribution to the club uncertain, though he says he wants everything to proceed normally.

Colin Kaepernick's name always will be associated with pro football as the instigator of kneeling and protests during the national anthem against police brutality, social and racial injustice. That began back in 2016, however, and only now has the league fully recognized what Kaepernick was attempting to expose.

This week, several teams skipped practice sessions in protest of the shooting of Jacob Blake by police in Kenosha, Wisconsin. More demonstrations of their togetherness in battling societal ills can be expected.

“We, the National Football League, admit we were wrong for not listening to NFL players earlier and encourage all to speak out and peacefully protest,” Commissioner Roger Goodell said while also embracing the Black Lives Matter movement. Approximately 70 percent of NFL players in 2019 were Black.

Now, how will the “team unity” being espoused by management and coaching staffs play out when the first bars of “The Star-Spangled Banner” are heard at Arrowhead Stadium for the Texans-Chiefs opener?

Like nearly everything else in 2020, prognosticating that is useless.