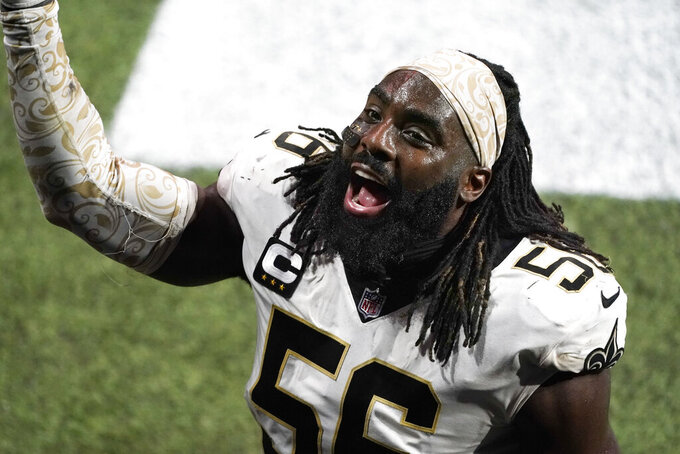 FILE - In this Dec. 6, 2020, file photo, New Orleans Saints outside linebacker Demario Davis leaves the field after an an NFL football game against the Atlanta Falcons in Atlanta. Davis embarked on a social justice listening tour in Atlanta, Washington, Buffalo, Minneapolis and Los Angeles in five days in June. A portion of profits from his “Man of God” masks and bandanas will benefit the families of George Floyd, Breonna Taylor and Ahmaud Arbery. (AP Photo/John Bazemore, File)

Many NFL players have been leaders on the social justice front, and some of them are being considered for the NFL’s Walter Payton Man of the Year award. None of them is dedicated to the cause with any such honors in mind.

Sure, having an enhanced platform as a nominee for the award that recognizes a player who has had a significant positive impact on his community is important. Such past winners as Calais Campbell, Anquan Boldin and Chris Long have been particularly influential in helping those in need.

In 2020, a year of reckoning for the social justice movement, the 32 nominees and hundreds of other NFL players, coaches and executives say they have gotten a deeper understanding of the issues facing America. They know how critical it is to act now.

“I just think 2020 has just been a hard year for a lot of people,” says Saints linebacker Demario Davis, who helped spearhead his team's #SAYHERNAME campaign, which points attention to Black women who have been victims of police brutality as well as the plights Black women may face in everyday life.

"And something that I try to represent is just hope. Everybody I help, everybody that I serve, it’s all in light of trying to bring hope to that individual or that group or that community.

“And so, in a time where so much is going on, and so many people have had to deal with so much, I hope that they can look to me as a symbol, or a representative of hope because ultimately, that’s all I want to bring.”

Davis embarked on a social justice listening tour in Atlanta, Washington, Buffalo, Minneapolis and Los Angeles in five days in June. A portion of profits from his “Man of God” masks and bandanas will benefit the families of George Floyd, Breonna Taylor and Ahmaud Arbery.

In the wake of the civil unrest this year, Rams players established a social justice fund and veteran tackle Andrew Whitworth pledged to match all his teammates’ contributions. The players awarded $750,000 to 25 social justice nonprofits across the greater Los Angeles region. Whitworth personally reached out to some of the nonprofits to thank them for their work.

"The greatest thing in life is to be able to invest in the people around you,” Whitworth says. “I’m always asking myself, ‘What can I do for this community?’ I want to put my arms around them. I want to stand right beside them. It’s never about me, it’s about all of us. It’s about a difference we can make together and how we can inspire each other to be there for one another.

"As great as it is to have people cheering us on every Sunday, it means the world to me to go out and pay that back. I want to show people that I’m not just an athlete that’s here to play ball, but that I’m here to make a difference. I believe that’s what will stand the test of time.”

While every American has been tested in 2020, whether by the COVID-19 pandemic and its effect on all aspects of our lives, or the bitterness that has permeated much of society, the need to act has become undeniable. For some in the NFL, it has been an awakening to the necessity — indeed, the obligation — to take an active role in their communities.

For Rodney McLeod of the Eagles, that has meant becoming a key voice in establishing the Eagles Social Justice Leadership Council comprised of a collection of players and club executives aimed at identifying potential grant recipients and securing contributions to the Eagles Social Justice Fund. McLeod has been one of the staunchest advocates for area-based organizations working to reduce barriers to equal opportunity.

“Throughout his career, Rodney has exemplified a relentless passion and commitment to making a difference, not only on the football field, but in the community,” says team owner Jeffrey Lurie.

“As a country, we have faced incredible hardship this year, but Rodney has been a bright spot for so many in our community. From creating the Change Our Future Foundation to assisting vulnerable communities in the midst of a pandemic to making his voice heard on social justice matters, Rodney has provided hope by sparking real change in Philadelphia and beyond.”

There are dozens more who could be cited for the specific initiatives they have undertaken this year. All of them likely would say they don't need the recognition, they simply want to help — and encourage others to do so.

“I just feel like it’s my job to help when I can,” Buccaneers receiver Mike Evans says. "When I was a kid, I’d always tell myself if I ever grew up to have money, I’d help even more people than I did when I didn’t have any money. God blessed me with this opportunity and I’m just trying to pay it forward while I can.”