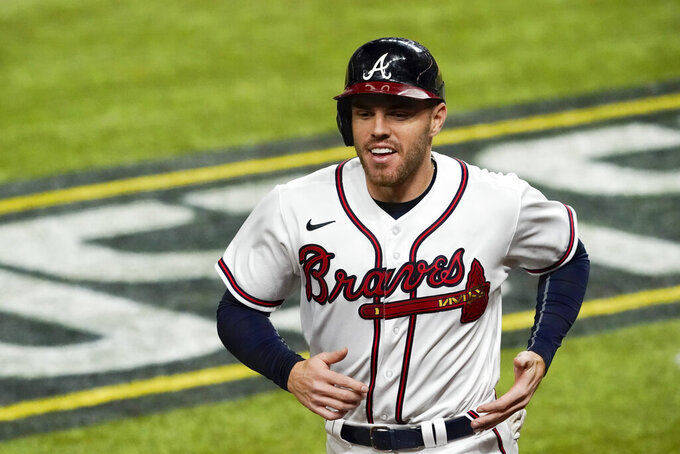 FILE - Atlanta Braves' Freddie Freeman smiles after scoring on a hit by Marcell Ozuna against the Los Angeles Dodgers during the sixth inning in Game 4 of a baseball National League Championship Series in Arlington, Texas, in this Thursday, Oct. 15, 2020, file photo. Freeman won't report with the Atlanta Braves position players on Tuesday, Feb. 23, 2021, following the births of his twin boys. Manager Brian Snitker said Monday he supports Freeman arriving later in the week.(AP Photo/Tony Gutierrez, File)

Freeman and his wife, Chelsea, on Sunday used their Twitter accounts to announce the additions of twin sons by posting “Officially a family of five.” Their first son, Charlie, was born in 2016. The Freemans did not immediately reveal names of their twins.

Due to coronavirus protocols in place at all Major League Baseball spring training sites, including the Braves' facility in North Port, Fla., Snitker said Freeman will have to spend “a couple days” away from his teammates after reporting. Other position players already have had their intake testing so they'll be cleared for the first full-squad workout on Tuesday.

Even so, Snitker said it was “no big deal at all” for Freeman to arrive later in the week.

“Actually, I’ll be honest with you, he doesn’t need to be here,” Snitker said. “I’m kind of glad he’s doing what he’s doing right now.”

Snitker noted Freeman normally swings well at the start of spring training “and then gets bored for 10 days.”

Even after battling high fever following a COVID-19 diagnosis before the delayed start of the 2020 season, Freeman returned to post dominant numbers. He was a runaway winner of the NL MVP award, landing 28 of the 30 first-place votes in balloting by members of the Baseball Writers’ Association of America.

Freeman hit .341 with 13 homers, 53 RBIs and a NL-leading 23 doubles in the regular season. The Braves finished one win shy of the World Series when they lost to the Los Angeles Dodgers in Game 7 of the NL Championship Series.

Freeman, 31, is entering the final year of a $135 million, eight-year contract. Even in a lineup that includes Ronald Acuña Jr. and Marcell Ozuna, Freeman is the Braves' leader and most established hitter.