No. 1 Alabama primed to prolong its primacy at LSU 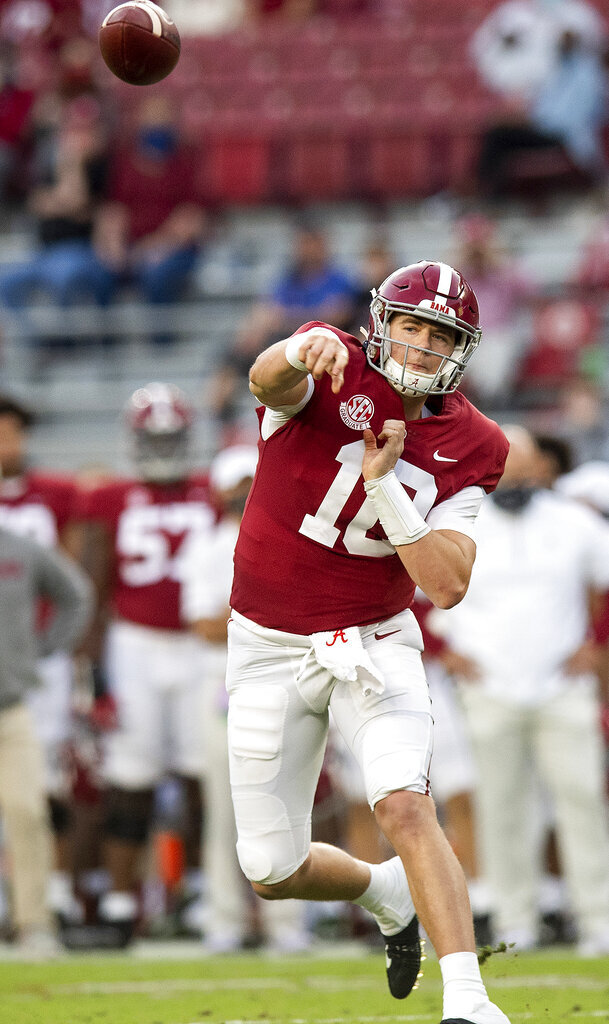 BATON ROUGE, La. (AP) — The way top-ranked Alabama has been rolling over opponents, coach Nick Saban likely could spend another week or more recovering from COVID-19 at home without jeopardizing the Crimson Tide’s national title hopes.

Saban, however, has left little doubt about his intention to be back on the sideline in Tiger Stadium on Saturday night, when unbeaten Alabama (8-0, 8-0 SEC) visits rebuilding LSU (3-4, 3-4).

“I’m feeling great,” said Saban, who had to watch Alabama’s lopsided Iron Bowl victory over Auburn from home last weekend. “l fully expect to be able to coach this game on Saturday.”

There’ll be a couple of streaks at odds in this 85th edition of an SEC rivalry dating back to 1895.

Alabama has won 96 consecutive games against unranked teams since the end of Saban's first season in 2007.

LSU, which fell at Texas A&M last week, has not lost two straight since coach Ed Orgeron took over four games into the 2016 season.

Odds makers have made it clear which streak they expect to continue, listing Alabama as four-touchdown favorites.

For the most part, 2020 has been a year to forget for LSU — one season after the Tigers won everything.

In 2019, LSU broke an eight-game losing streak in its series with Alabama en route to a 15-0 record and national championship. Then came the loss of 14 prominent players taken in the NFL draft, followed by several more opting out of this pandemic-altered season.

Nearly one year after Joe Burrow became the first LSU quarterback to win the Heisman Trophy, Alabama QB Mac Jones arrives in Baton Rouge as a leading candidate for that same award, having completed 76.2% of his passes this season for 2,728 yards and 23 touchdowns.

The Tigers’ task only got tougher when their leading receiver, Terrace Marshall Jr., decided on Sunday to opt out for the rest of the season. His departure leaves LSU without a 6-foot-3 target who’d caught 48 passes for 731 yards and 10 touchdowns in seven games.

Still, Orgeron and his players sound enthused to see this matchup rescheduled after it was initially postponed from Nov. 14 by a COVID-19 outbreak at LSU.

“We’re playing Alabama at home. That’s all we need to hear,” Orgeron said. “Playing Alabama is a great rivalry for us, a great game over the years for us, a tremendous challenge. They’re the No. 1 team in the country coming to Tiger Stadium. Let’s play.”

Or as Tigers receiver Jaray Jenkins put it: “We still have a chance to shock the world.”

It’s hard enough to beat Saban’s Alabama teams once, much less doing it again the next time.

Saban said he usually doesn’t try to use that to motivate his team.

“But I think nobody likes to get disrespected, and I think when you lose a game you feel that way to some degree,” he said. “I think it’s human nature to try to make it right. I do think that is a motivating factor for most human beings.”

Orgeron largely deflected blame from freshmen LSU QBs TJ Finley and Max Johnson for the Tigers' offensive struggles in last week's 20-7 loss. The coach says the protection was the problem.

“The scheme has to be better,” Orgeron said. “Too many free blitzes hitting our young quarterbacks. Our execution has to be better on run blocking. We did not control their front or blitzes.”

Orgeron added that he and his offensive staff “came up with a lot of solutions” that they were implementing this week.

Alabama has not allowed a touchdowns in its last 11 quarters, plus one overtime possession, at Tiger Stadium, outscroing LSU 59-6 in that span. That includes a 29-0 win at LSU in 2018. The Tigers' last touchdown against the Tide in Death Valley came at the 2:07 mark of the first quarter in ’Bama’s 20-13 overtime win in 2014.

LSU has been shut out just four times at Tiger Stadium over the last 28 years — each time by the Tide.

While LSU’s pass defense has been among the nation’s worst much of this season and prone to coverage busts, the Tigers secondary seemed to suddenly figure a lot out last week at Texas A&M.

LSU held Aggies QB Kellen Mond to a season-low 105 yards passing and his first game this season without a touchdown pass.

LSU now needs a strong encore performance against an Alabama receiving corps led by DeVonta Smith, who has 27 catches for 518 yards and eight touchdowns in just his past three games.