No. 1 Gamecocks' top reserves out, playing in FIBA tourney 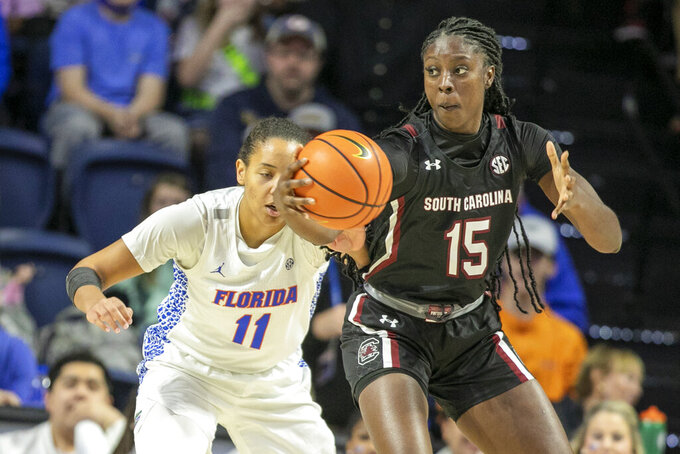 COLUMBIA, S.C. (AP) — Top-ranked South Carolina will be without its top two reserves when the Gamecocks hit the road to take on Kentucky and No. 17 Georgia this week.

South Carolina (21-1, 9-1 Southeastern Conference) has won its past nine games since its lone loss at Missouri to start league play.

Amihere is competing for Canada while Cardoso plays for Brazil. Both are expected to be back for South Carolina's home game against Auburn on Feb. 17.

Amihere is a 6-foot-4 junior from Ontario, Canada, who has played internationally for her country since 2015. She was a member of the Canadian team that finished ninth at the Tokyo Olympics this past summer.

Cardoso is a 6-foot-7 transfer from Syracuse in her first season with the Gamecocks. She was part of Brazil's bronze medal-winning team at the FIBA AmeriCup event last year.

Amihere has played 17 games, including three starts in December at point guard for injured starter Destanni Henderson. Amihere is fourth on the team in scoring at 7.1 points a game.

Cardoso is fifth in scoring at 6.6 points a game and second in rebounding at 5.7 boards. She's played in 20 games, all off the bench.