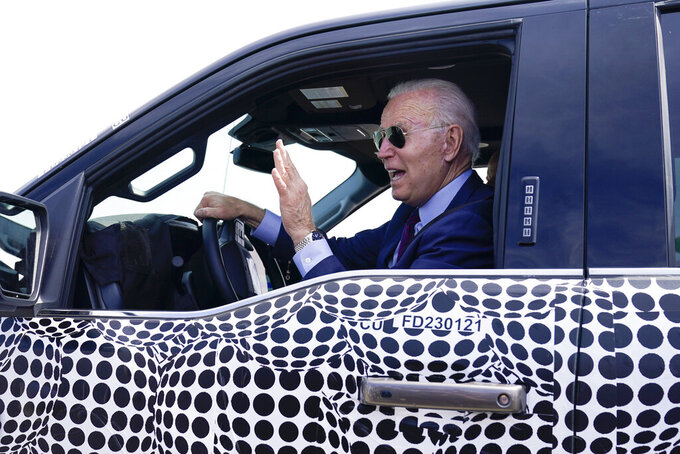 FILE - In this May 18, 2021 file photo, President Joe Biden stops to talk to the media as he drives a Ford F-150 Lightning truck at Ford Dearborn Development Center in Dearborn, Mich. On Friday, May 21, The Associated Press reported on stories circulating online incorrectly claiming Biden was caught fake driving a Ford F-150 Lightning truck during a visit to a Ford safety testing center Tuesday. (AP Photo/Evan Vucci, File)

Arizona election database is not missing

CLAIM: The election database in Maricopa County in Arizona has been deleted, seals were improperly broken on boxes that hold the votes, and ballots are missing.

THE FACTS: An unprecedented, partisan audit of the 2020 election in Arizona’s largest county is being used to spread false information about the vote. Though a partial hand recount and two extra audits found no issues in the election that gave Biden a margin of victory of less than 10,500 votes in the battleground state, Republicans in the Arizona state Senate used their subpoena power to take possession of all 2.1 million county ballots, the machines that counted them and hard drives full of data, and hired a Florida-based cybersecurity firm to comb through it. The firm, Cyber Ninjas, is run by a supporter of former President Donald Trump who has promoted election conspiracy theories. On May 12, Senate President Karen Fann sent a letter to the chairman of the Republican-controlled Maricopa County Board of Supervisors accusing county officials of deleting election databases. The letter also questioned why there were discrepancies between certain batches of ballots and log sheets, and why broken seals were found in ballot boxes. Trump released a statement echoing Fann’s letter, which also spread on social media. It read, in part: “The entire Database of Maricopa County in Arizona has been DELETED! This is illegal and the Arizona State Senate, who is leading the Forensic Audit, is up in arms. Additionally, seals were broken on the boxes that hold the votes, ballots are missing, and worse." At a meeting Monday, county officials refuted the allegations and issued a 14-page response to Fann, calling her accusations “false, defamatory, and beneath the dignity of the Senate.” The letter, along with a separate technical memo, detailed the procedures around the vote and explained how they had been misunderstood by those behind the Senate's audit. In refuting the claim about deleted databases, the county listed a number of technical mistakes that may have been made by the firms running the audit when they configured a copy of the data and searched for the files in question. Furthermore, Megan Gilbertson, communications director for Maricopa County Elections Department, told The Associated Press that “the county backs up and archives all of its election data.” On Tuesday, Ben Cotton, the founder of a computer forensics firm working on the audit, told key senators the data in question had been deleted from the server he copied but he also acknowledged he had recovered the data and had access to it -- thereby undermining the claim that the database had been permanently destroyed. Seals were not improperly broken on ballots, as was alleged. They were opened before the tabulated ballots were put in long-term storage, which is standard procedure, according to county officials. As for the allegation that ballots were missing: If a ballot cannot be read by the tabulation machine, it must go through a distinct process to be duplicated and is tracked in a separate set of logs. Liz Howard, senior counsel for the Democracy Program at the Brennan Center for Justice, said those running the audit are “basically looking at the wrong tracking sheets, the wrong documents." Election integrity experts who reviewed the county’s documents said the evidence indicates the county followed established protocols, but those conducting the audit lacked professional election experience to understand what they were examining. “Experts have raised concerns over how those conducting this review would not know what they were looking at and that they would draw incorrect and malicious conclusions to support their own agendas,” said Tammy Patrick a former Maricopa County official and senior adviser to the elections program at Democracy Fund. Fann did not respond to a request for comment.

CLAIM: SM-102 is an ingredient in the Moderna vaccine that is not safe for humans or for veterinary use.

THE FACTS: As millions of Americans receive COVID-19 vaccines, posts online are falsely claiming that an ingredient listed in the Moderna vaccine is unsafe for humans and animals. One Instagram user posted a video that compares the ingredient list for the Moderna vaccine with the ingredients in a chemical solution made by the Michigan biotech company Cayman Chemical. Both products list SM-102, a lipid, as an ingredient. The Cayman product comes with a warning that it is to be used for research purposes only and contains chloroform. “It’s unbelievable how many people are just following this blindly, and not doing active research to find out what they are putting into their, and now their children’s body,” the caption on the video reads. In fact, SM-102 — the ingredient both products have in common — is harmless to people and isn’t what makes the Cayman Chemical solution dangerous. Only the Cayman product contains chloroform, a hazardous solvent. The posts ignore information on the Cayman Chemical safety sheet that lists chloroform as a “dangerous component” and lists SM-102 separately under “other ingredients.” In response to the misleading social media posts, Cayman Chemical released a statement reaffirming that the product being mentioned online is made up of 90% chloroform and 10% SM-102. It is intended for research purposes only. The company has a separate division for products for human and veterinary use. “While it is a common solvent, chloroform has several known serious hazards,” the company said in a news release. “Neither the National Institute for Occupational Safety and Health (NIOSH), Registry of Toxic Effects of Chemical Substances (RTECS), or the European Chemicals Agency (ECHA) Classification and Labelling Inventory list any hazards associated with SM-102.” The Moderna vaccine uses SM-102 to deliver the genetic code, or mRNA, of the spike protein that coats the coronavirus into our cells. Experts say there is no need to be concerned about SM-102 in the vaccine. The amount of lipid used in the vaccine is very small, said Lisa Morici, an associate professor in the Department of Microbiology and Immunology at Tulane University School of Medicine, in an email. “Our own cell membranes are composed of lipids,” she said. Representatives for Moderna could not immediately be reached for comment.

CLAIM: A video shows a child shaking uncontrollably in response to the COVID-19 vaccine.

THE FACTS: A video of a child with epilepsy experiencing a seizure is being shared online to falsely imply the child is reacting to a COVID-19 vaccination. The video shows a young boy in an orange and blue shirt trembling as an adult woman soothes him, saying, “Come on, baby” and telling him to breathe. Overlaid text on the clip reads, “But they’re safe right?!” and copies language about the safety of COVID-19 vaccines from the World Health Organization. In a version that amassed more than 2 million views on Facebook, a second video alongside the first shows a woman crying and shaking her head in fear. Taken together, the post falsely implies the child’s physical symptoms are somehow related to the COVID-19 vaccine. But in a May 6 Instagram post, the boy’s father explains that the child has epilepsy and has experienced seizures since 2009. “No, nothing to do with Covid,” the post reads. In the post, the father does claim that his son’s epilepsy is related to vaccines he received as a young child. But that is not supported by scientific evidence, Dr. Paul Offit, a vaccine expert at the Children’s Hospital of Philadelphia, told The Associated Press. “Vaccines do not cause epilepsy,” Offit said. One side effect of many vaccines is a fever, which can cause seizures in a small percentage of young children, Offit explained. But those seizures, known as febrile seizures, are “short-lived and do not cause permanent harm,” he said. Data on the millions of COVID-19 vaccinations administered so far does not show any link between the vaccines and seizure disorders, Offit said. U.S. health advisers endorsed the use of Pfizer’s COVID-19 vaccine in kids as young as 12 last week. The two-dose vaccine made by Pfizer and its German partner BioNTech was studied in more than 2,000 kids ages 12 to 15 and was found to be safe and effective. Children who haven’t been vaccinated should still wear masks and keep 6 feet apart, according to the CDC, which recommends masks for children age 2 and older in public settings and when with people outside their household.

Image of pyramids lit with Palestinian flag is manipulated

CLAIM: A photo shows Egypt projected the Palestinian flag on its Giza Pyramids during the latest war between Palestinian militants in Gaza and the Israeli military.

THE FACTS: An internet search reveals this image was fabricated using a 2014 photo of the pyramids that did not feature the flag projection. Since fighting broke out between Israel and the Hamas militant group in Gaza on May 10, neighboring Egypt has treated wounded Palestinians and sent trucks carrying humanitarian aid and medical supplies to Gaza. However, Egypt has not shown solidarity with the Palestinians in the form of a light show on its three famed pyramids of Giza, despite a fake image suggesting as much on social media. The image circulated widely on Facebook, Instagram and Twitter on Tuesday, with captions in both Arabic and English. “Egypt showing the flag of Palestine on the pyramids,” wrote a Facebook user. “Thank you Egypt!” In reality, the widely circulating picture is an edit of a 2014 image of the pyramids that can be found on Wikimedia Commons. On Thursday, Prime Minister Benjamin Netanyahu’s office announced Israel would halt its offensive against Hamas militants.

CLAIM: President Joe Biden was caught fake driving a Ford F-150 Lightning truck during a visit to a Ford safety testing center Tuesday. A man in the passenger seat was operating the vehicle using a second steering wheel.

THE FACTS: An article shared thousands of times on Facebook this week falsely claimed that the president faked his Tuesday test drive of an electric Ford truck at Ford’s Rouge Electric Vehicle Center in Dearborn, Michigan. “WOW! Biden Caught Fake Driving -- Someone Else Is Steering Vehicle -- It Was All a Stunt!” a headline on the conservative website The Gateway Pundit read. The story misrepresented videos and pictures to claim they showed a passenger in the truck was steering instead of the president. There’s no truth to these claims, according to Melissa Miller, manager of government and public policy communications at Ford. “There was only one steering wheel in the vehicle the president drove yesterday,” Miller said in an email Wednesday. Photos and videos of the event show that the passenger in the vehicle, who was identified to reporters as a member of Biden’s Secret Service detail, was adjusting a camera that was resting on the dashboard, not operating the car. Associated Press photos of the inside of the vehicle show the right side of the dashboard was obstructed by a black cloth covering, which car experts say is typical in prototype vehicles before they are released. “Cloth coverings are very common on the interior of prototype vehicles because they’re designed to hide the dashboard from prying eyes before the product is officially released to the market,” said Billy Rehbock, social media editor at the automotive website MotorTrend. The Gateway Pundit did not respond to a request for comment.