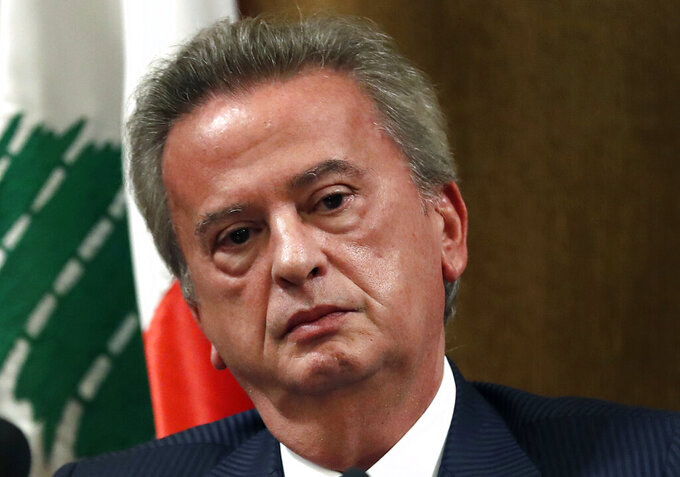 FILE - In this Nov. 11, 2019 file photo, Riad Salameh the governor of Lebanon's Central Bank, listens to a journalist's question during a press conference, in Beirut, Lebanon. A New-York-based company that was contracted by Lebanon's government to conduct a forensic audit of the country's central bank has decided to pull out of the deal because it was not able to acquire needed information and documents, Lebanese outgoing finance minister said Friday, Nov. 20, 2020. (AP Photo/Hussein Malla, File)

BEIRUT (AP) — A New-York-based company contracted by the Lebanese government to conduct a forensic audit of the country’s central bank has decided to pull out of the deal because it was not able to acquire requested information and documents, Lebanon's outgoing finance minister said Friday.

The announcement by Alvarez & Marsal deals a major blow to those hoping for accountability in a country mired in corruption and a crippling economic and financial crisis. It comes after Lebanon’s central bank refused to provide the company with the needed documents, using the country’s decades-old banking secrecy laws as a pretext.

A forensic audit has been a key demand by the International Monetary Fund and international donors who have said that they will not give money to Lebanon before major reforms are implemented to fight corruption and widespread waste in state institutions.

Outgoing Finance Minister Ghazi Wazni told The Associated Press on Friday that Alvarez & Marsal, which was contracted in July, says the information it received so far isn't enough and that it doesn't expect to get more.

Wazni added that the Lebanese government last week asked the company to stay for another three months in order for the state to provide it with all the information and documents needed.

“I was surprised when I received their statement today,” Wazni said adding that Alvarez & Marsal agreed last week to give the Lebanese state three more months. “I find it odd. They should not have accepted the extension last week,” he said.

The banking secrecy laws, once a mainstay of Lebanon's banking system, had attracted clients from around the Arab world who prized the anonymity its banks offered.

The country's current economic and financial crisis, the worst in its modern history, is rooted in decades of corruption and mismanagement. The crisis deepened after nationwide anti-government protests broke out in October last year and the spread of the new coronavirus in 2020. A massive blast at Beirut's port on Aug. 4 that killed over 200 people and caused damage worth billions of dollars has worsened the situation.

The outgoing government had been calling for a forensic audit into the central bank’s accounts since March, after the country defaulted on paying back its massive debt for the first time earlier this year.

President Michel Aoun has been a strong supporter of a forensic audit but other politicians were strongly opposed to such a move, which could reveal parties that have been benefiting from corruption.

Also Friday, a government official said Lebanon signed a deal earlier this month with a German company to remove 49 containers at Beirut’s port filled with dangerous materials. The move comes three months after nearly 3,000 tons of ammonium nitrates exploded at the facility, destroying much of the port and damaging nearby neighborhoods.

The official said Germany's Combi Lift will ship abroad the containers consisting of flammable chemicals in a $3.6 million deal of which port authorities will pay $2 million. The official was not authorized to speak to the media and therefore spoke on condition of anonymity.

Since the Aug. 4 blast and a massive fire at the port weeks later, authorities have been concerned about dangerous material still at the facility. A month after the blast, the Lebanese army said military experts were called in for an inspection and found 4.35 tons of ammonium nitrate that were removed and destroyed.