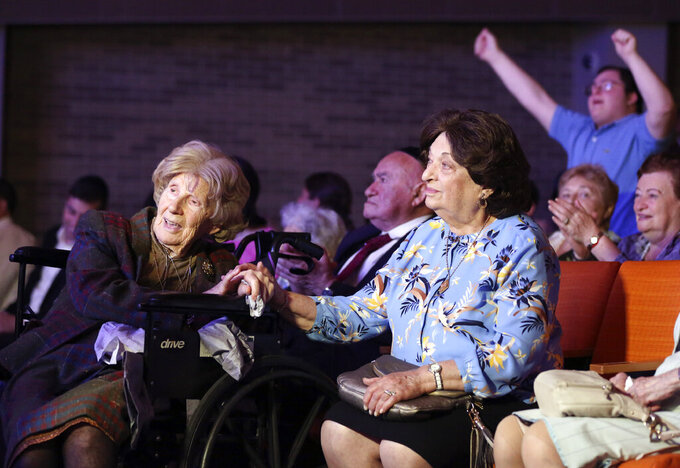 Aranka Engel, 103, left, holds the hand of fellow Holocaust survivor Jean Kurz, 81, while watching Orthodox Jewish singer Yaakov Shwekey perform at a concert honoring them and dozens of other Holocaust survivors on Monday, June 14, 2021, at the Yeshivah of Flatbush theater at Joel Braverman High School in the Brooklyn borough of New York. It was the first large gathering for New York-area Holocaust survivors after more than a year of isolation due to the coronavirus pandemic. (AP Photo/Jessie Wardarski) 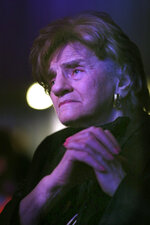 NEW YORK (AP) — Dozens of Holocaust survivors clapped, sang and danced Monday at a concert held in their honor in Brooklyn in the first large gathering for New York-area survivors after months of isolation during the coronavirus pandemic.

The concert by popular Orthodox Jewish singer Yaakov Shwekey was organized by the Nachas Health and Family Network and other groups that help the more than 35,000 Holocaust survivors estimated to live in the New York City metropolitan area.

“It’s extremely good for the soul, for the heart, to see people coming out once again and socializing,” said Dolly Rabinowitz, who sat in the front row of the Yeshivah of Flatbush auditorium joined by other Holocaust survivors and students of the Modern Orthodox Jewish school.

The survivors, most of whom are now in their 80s and 90s, suffered unspeakable horrors in concentration camps. In the past year, many remained isolated at home because they were at a high risk of contagion from the fast-spreading virus.

“To be out once again is like reviving ourselves. To sit among our children and grandchildren is heartwarming,” said Rabinowitz, who lived through Auschwitz and the Death March.

Many of the survivors arrived at Monday’s concert in yellow school buses.

“This feels like going back to school!” Henry Rosenberg, 92, told other survivors as he stepped off a bus and walked into the Yeshivah of Flatbush Joel Braverman High School.

“It’s good to feel the fresh air. It was hard,” he later said about the pandemic. “We couldn’t go to any places for many months.”

Some students greeted them inside and helped those with mobility issues to their seats in a cafeteria. Afterward they walked to the school theater for the show.

Some held hands and choked back tears when they heard an instrumental version in violin and piano of “Ani Ma'amin,” Hebrew for, “I believe,” which was sung by many Jews who were herded into cattle cars on their way to concentration camps.

During WWII, many of them were tattooed with ID numbers, shorn of hair and used as slave labor. Some nearly starved and witnessed family members killed. Sometimes, they’ll share these experiences to teach younger generations about the horrors they endured at a time when global antisemitism is rising, while fewer young people know about the Holocaust and its death camps.

“It’s the unfortunate reality that some time from now, we’re not going to have these Holocaust survivors to tell their story, so it’s so crucial an critical for us to be with them, to get their stories and cherish them,” said Michael Oved, 17, who recently graduated from the high school and will soon attend Harvard University.

The lesson for other generations, Oved said, “is to keep going. These people have suffered through hell and back, yet they’re here standing. And during the pandemic, they were just as strong as they ever were. So their message to us should be: Always, always persevere and never give up.”

Some Holocaust survivors regularly attend Nachas, Yiddish for “joy,” which is part of a network of community centers that offer wide-ranging services to survivors. Dozens go there to socialize, receive legal assistance, study the Torah, exercise, get counseling and eat meals.

Lillian Feintuch, 85, who contracted the coronavirus and for months lost her sense of smell and taste, has now returned to exercising at Nachas and at a local YMCA. On Monday she joined a group of women on stage, smiling, lifting her arms high and swaying from side to side to a catchy tune called “Et Rikod,” or “Time to dance.”

“I don’t take anything for granted," Feintuch said. "I thank God every day for little things that I have in my life ... for being able to talk and walk and think for myself.”

This story has been corrected to delete an erroneous reference to a Nazi invasion of Germany.