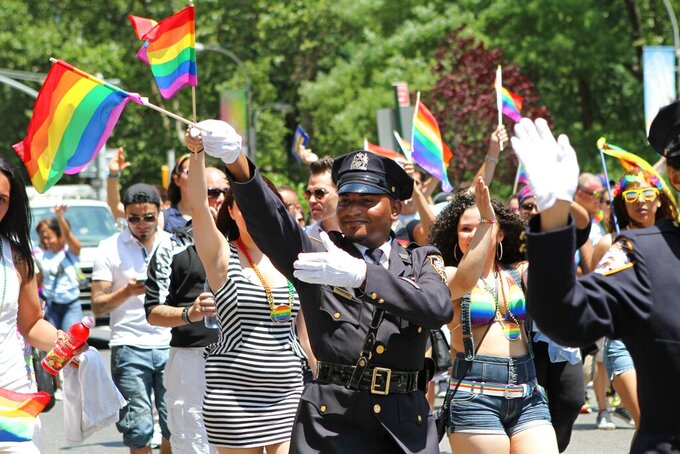 FILE - NYPD police officers march along Fifth Avenue during the gay pride parade, Sunday, June 29, 2014, in New York. As Pride weekend approaches, the recent decision by organizers of New York City's event to ban LGBTQ police officers from marching in future parades while wearing their uniforms has put a spotlight on issues of identity and belonging, power and marginalization.(AP Photo/Julia Weeks, File)

NEW YORK (AP) — For decades, when LGBTQ people have gathered to take part in New York City’s annual Pride march, they’ve made their presence known with every color and type of clothing imaginable.

But soon, there's going to be something off-limits: police uniforms.

As the city's annual Pride weekend approaches, a recent decision by organizers of New York City's event to ban LGBTQ police officers from marching in uniform in future parades has put a spotlight on issues of identity and belonging, power and marginalization.

For some, cops shouldn't have a uniformed presence at a march commemorating the 1969 Stonewall uprising, sparked by a police raid on a gay bar. Tensions between law enforcement and some parts of the LGBTQ community still exist, a half century later.

“Folks still have challenging and traumatic and many times horrific relationships with law enforcement,” said John Blasco, a parade regular. “If you’re an officer ... of course you should be able to celebrate and express your pride, but you don’t need to do it in a uniform that has perpetuated violence against many of the people who are trying to celebrate their pride that day.”

For others, presence of LGBTQ police marchers is an expression of hard-fought diversity and inclusion that should be celebrated, a hallmark of how integral LGBTQ people are in the fabric of American life.

It’s somewhat of a moot point this year; with pandemic limitations still in play until only recently, the New York City Pride event planned for Sunday organized by Heritage of Pride is largely a virtual one.

But the ban will be in effect next year until at least 2025, the organizers said.

The role police officers should play in the annual parade has been debated for years, but it took on new heat amid a national reckoning around police brutality.

New York City's streets a year ago were awash in protests over the death of George Floyd and clashes between demonstrators and officers.

There is a long history of fraught interactions between LGBTQ people and law enforcement, particularly among those who are racial minorities or transgender, and say they feel targeted and harassed by policing as a system.

The divide over whether uniformed police have a role in Pride “goes to the heart of one of the long standing tensions in LGBT politics,” said Marc Stein, history professor at San Francisco State University.

“Is the goal diversity, or is the goal addressing fundamental power relationships in society, and inequality?” he asked. “Those are two really different things.”

The ban is not the first for a Pride march; Toronto Pride hasn't allowed uniformed police since 2017, and Vancouver Pride started limiting their role then as well, while Capital Pride Alliance started doing so in 2018. Denver PrideFest isn't allowing law enforcement to take part in its virtual event this year, and neither is the Capitol Hill Pride Festival, which takes place in Seattle but is separate from Seattle Pride.

In New York City, an alternative to the Heritage of Pride event called the Queer Liberation March, organized by the Reclaim Pride Coalition as a rebuttal to what they consider a too-corporate, too-comfortable main parade, has never allowed a police presence since its 2019 inception.

Andre Thomas, co-chair of Heritage of Pride, the group that organizes the main New York City march, said the process that led to that ban started last year.

There was no New York City Pride in-person event because of the pandemic, but Reclaim Pride did hold a march, and at the end, police arrested and pepper-sprayed some demonstrators.

That negative interaction led to LGBTQ community pressure on Heritage to respond forcefully to police mistreatment, Thomas said, which led to internal conversations as well as conversations with the city and the NYPD about the level of police security staffing at NYC Pride events and how that could be de-escalated.

Thomas said those discussions also involved reaching out to the Gay Officers Action League. GOAL members have been marching in NYC Pride in uniform since 1996, often to cheers.

But there are also those members of the LGBTQ community who are not cheering, who have a much more contentious relationship with police, Thomas said.

“We realized that for many people in the community, that uniform is triggering, that creates a sense of being unsafe and unwelcome,” he said.

The organization's executive board had to “weigh the need for one group to wear a uniform for a couple of hours vs. the need for someone who's marginalized feeling safe and welcome,” he said.

They spoke to GOAL, and that organization announced the ban before Heritage did, putting out a release saying they were being kicked out of the parade, and that the decision made “in order to placate some of the activists in our community is shameful.”

Arboleda, vice-president at GOAL, acknowledged that some people did have negative interactions with officers, but felt that those were outweighed by people who had good experiences with law enforcement.

“We have to think and see the bigger picture for what it is,” she said. A small number of bad experiences “doesn’t cancel out millions of positive experiences.”