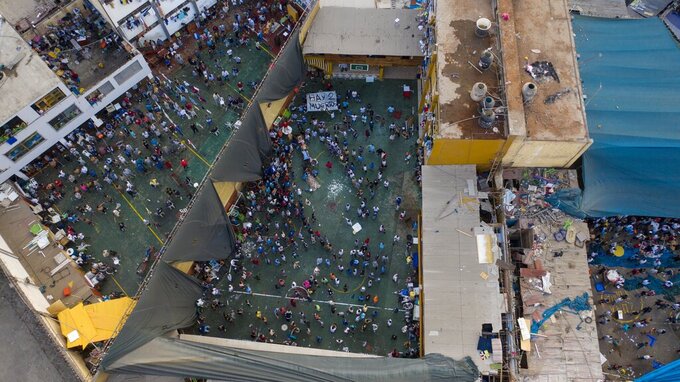 Inmates gather around the corpses of other inmates during a prison riot in Miguel Castro Castro prison, in Lima, Peru, Monday, April 27, 2020. Peru's prison agency reported that three prisoners died from causes still under investigation after a riot at the prison. Inmates complain authorities are not doing enough to prevent the spread of coronavirus inside the prison. (AP Photo/Rodrigo Abd)

LIMA, Peru (AP) — Prisoners in Peru staged a riot to protest their precarious living conditions following the deaths of several fellow inmates from the new coronavirus, but the revolt in itself proved fatal, with nine prisoners winding up dead, authorities said.

Authorities said Tuesday the inmates were shot to death during a clash with authorities at the Miguel Castro Castro prison in Lima a day earlier. Who fired the deadly shots was under investigation.

Hundreds of inmates gathered around the bodies of two of the dead in a common space of the prison late Monday afternoon. Images taken by The Associated Press show one of the deceased prisoners was surrounded by candles and placed next to a cross and an illustration of Jesus Christ that is venerated in Peru.

“Right to life,” read a large sign created by the prisoners with black cloth and white letters. “We want to live but outside these walls.”

Peru’s overcrowded jails have been hard hit by the coronavirus: At least 13 prisoners have died and more than 500 have been infected. Over 100 workers have also fallen ill.

Throughout Latin America, prisons are notoriously overcrowded, violent and dominated in large part by gangs or corrupt officials. Overall there are 1.5 million inmates in the region's jail cells, which often lack basic necessities like soap and water.

Governments in the region have reported close to 1,400 confirmed COVID-19 cases among inmates and prison staff, though advocates say not enough testing is taking place.