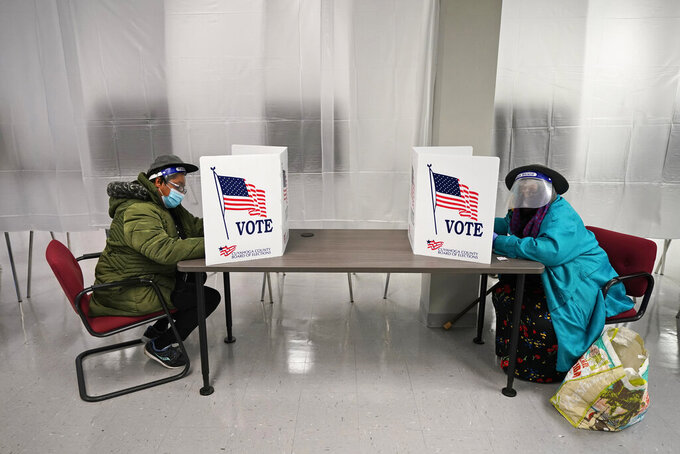 FILE - In this Oct. 6, 2020, file photo two voters fill out ballots during early voting at the Cuyahoga County Board of Elections in Cleveland. (AP Photo/Tony Dejak, File)

A crippling pandemic, a racial injustice reckoning, a statehouse scandal and a divisive election. In any other year in Ohio, just one of those would have been the biggest story of the year.

But 2020 was no ordinary year. How unexpected was it? Even the Cleveland Browns were making a run at ending their NFL playoff drought.

A look back at Ohio’s most memorable news of 2020 as selected by The Associated Press:

A week later, Ohio became the first state to shut down schools. Next came a ban on indoor dining and the end of high school sports seasons. Nursing homes and prisons were hit hard.

But it wasn’t long before the governor faced a mutiny over business closures and health mandates. Republicans later pushed legislation to limit his powers and some even called for impeaching him.

Acton, the target of lawsuits over her health orders and protests outside her home, quit in June.

In August, DeWine announced he tested positive, but later that day, a more sensitive test showed he didn't have the virus.

A surge in cases in November brought a new statewide curfew and stay-at-home advisories in Ohio’s biggest cities.

The toll in Ohio as the year ended and the first vaccines were being distributed — more than 600,00 positive cases and 8,000 dead.

The killing of George Floyd in Minnesota sparked peaceful marches and violent unrest nationwide and across Ohio along with a movement demanding a fresh look at racial injustice.

Protests popped up not only in big cities, but also in small towns. Large crowds marched down city streets and families held up Black Lives Matter signs on neighborhood street corners. People were calling for an end to police killings and to reallocate funds to programs that support mental health and education.

In the early days of the unrest during May and June, protesters and law enforcement clashed, with videos and news reports documenting people damaging government buildings while officers used force against demonstrators, firing wooden and rubber bullets and making unlawful arrests.

DeWine called in the National Guard and the highway patrol to help enforce curfews.

In December, a Franklin County sheriff's deputy who was not wearing a body camera fatally shot a Black man, Casey Goodson Jr., in Columbus, resulting in an outcry by the public on the lack of footage and the initial handling of the investigation. In response, the county approved more than $2.5 million in funding to outfit deputies with body cameras.

Just when the presidential race turned its attention toward Ohio ahead of the state's March primary, the coronavirus outbreak interrupted everything. Candidates canceled rallies, get-out-the-vote drives went virtual, and with just hours to go before polls were to open, DeWine’s health director called off the March 17 presidential primary.

The rescheduled primary was conducted six weeks later almost exclusively by mail, an Ohio first, and without major glitches.

When Donald Trump and Joe Biden met in Cleveland for their first debate, the exchange descended into near-chaos that will go down in the history books.

That marked the first time in 60 years that Ohio voters hadn’t sided with the winner of the White House.

The second half of 2020 brought a corruption scandal that rocked the Statehouse.

U.S. Attorney David DeVillers in late July announced the arrest of House Speaker Larry Householder and four others as part of an investigation into a $60 million bribery scheme secretly funded by FirstEnergy Corp. to obtain legislative passage of a $1 billion bailout for two nuclear power plants.

While Householder has pleaded not guilty to federal racketeering charges, his top adviser and a former lobbyist for a FirstEnergy subsidiary did plead guilty. Householder was removed as speaker but won reelection to his legislative seat in November.

Akron-based FirstEnergy fired its CEO and two top executives in late October. The company later revealed the executives had paid $4 million to end a consulting contract with someone matching the description of Samuel Randazzo, chair of the powerful Public Utilities Commission of Ohio. Days later, FBI agents searched Randazzo’s home and he resigned.

As 2020 drew to a close, legislators wrestled with what to do with the tainted bill, and a county judge blocked the collection of fees that electricity users were to start paying to cover the bailout.

The year in Ohio sports was filled with coronavirus disruptions and also marked the beginning of the end of the Cleveland Indians' name.

The Major League Baseball franchise announced in December it would replace the Indians moniker it has carried 105 years because of concerns it was disrespectful to Native Americans. However, the club said it will play 2021 as the Indians while choosing a new name.

Cleveland’s Browns closed in on their first playoff game since 2002, overcoming the early-season loss of receiver Odell Beckham Jr. to injury and a two-game loss of star defensive end Myles Garrett who tested positive for COVID-19.

The Ohio State University Buckeyes had to work around cancellations — including one that halted their rivalry game against Michigan for the first time in 102 years — because of the virus outbreak. Ohio State finished the regular season unbeaten and landed a spot in the college football playoffs against Clemson.

The Indians and Cincinnati Reds were quick outs in MLB’s expanded playoffs after a shortened season, and the University of Dayton Flyers’ No. 3 basketball team never got a chance to make a potential title run as the virus outbreak provided this year’s March Madness.