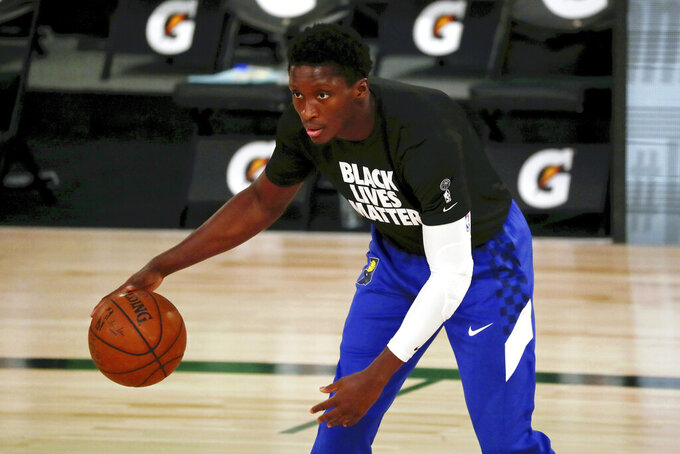 Financial terms of the deal were not disclosed, but it will make the 28-year-old Oladipo one of world’s youngest basketball team owners — and the owner of the New Zealand's home arena.

“I was always interested in being part of team ownership, having input with a team and helping a team be successful on the business side of things," Oladipo said. “To work with a team from this perspective, I'm sure I'll have newfound respect for the guys who have been in that position.”

The announcement comes at a time some have questioned Oladipo’s commitment to the Pacers. He initially opted out of playing in the NBA's coronavirus bubble this summer over concerns about his injured right knee.

Eventually, he backtracked and did play in Orlando.

Last week, The Indianapolis Star reported that while he was in the bubble, Oladipo repeatedly asked opposing players whether they'd be interested in having Oladipo as a teammate.

“It is what it is, it’s over with now. Emotions were felt. I have no ill will toward anybody,” Oladipo said. “I love everyone, I pray for everyone, that’s just the kind of guy I am. I just look forward to playing for the Pacers and winning a championship for the state of Indiana.”

In the meantime, Oladipo has continued rehabbing the knee and says he feels as close to 100% as he has at any point since rupturing his quadriceps tendon in January 2019.

And he continues to contemplate life after basketball.

While the two-time All-Star guard still will get an up-close look at how management makes decisions, deals with salary caps and evaluates talent, he will not be running the day-to-day operations. Henderson, who has worked with Oladipo for the past seven years, anticipates filling that job.

“We do a lot of startups together, we own a few companies together and now we’re going to be owners of the New Zealand Breakers,” Henderson said. “I can’t even say I dreamed about it, I always thought what it would be like to own a franchise, but you never fully expect it to happen.”

Oladipo has never traveled to New Zealand but has promised to make at least one trip per year to Auckland where the team is based.

He said he first became interested in the league after watching American youngster LaMelo Ball play for the Illawarra Hawks last season and jumped at the opportunity to be part of it.

“I definitely think this league is growing, I know it’s growing,” Oladipo said. “It’s really competitive. I actually saw a few games when LaMelo was playing and I think it’s becoming a hot commodity."

New Zealand has been one of the league’s most successful and consistent franchises. The Breakers have had only two losing seasons since 2007-08, won three consecutive NBL titles from 2011-13, claimed a fourth title in 2015 and finished as the league runner-up in 2016.

They start this season seeking their first playoff appearance in four years and with some uncertainty because of the COVID-19 pandemic.

Larry Kestelman, the league's owner and executive chairman, announced last week that next season is expected to tip off in early 2021. The start date has been pushed back in hopes of playing in front of larger crowds.

“Luckily, I'm at a point in my career where I just need to focus on the game, improve on myself, improve on my body," Oladipo said. “But when the ball stops bouncing, God willing it's like 15 years from now, I'll have lots of options, different avenues I can explore."