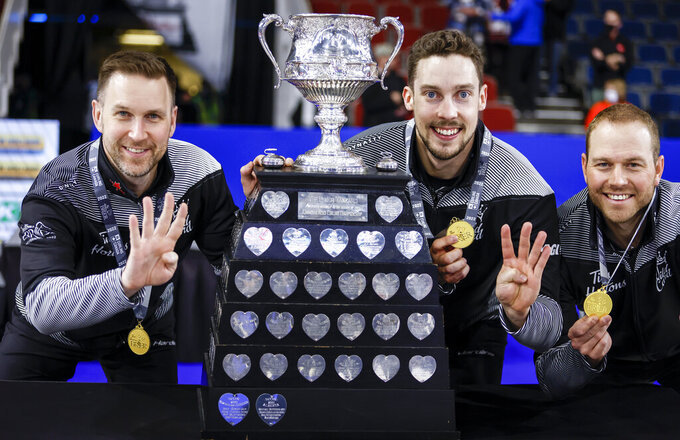 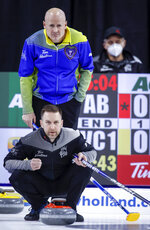 Two-time Olympic curling medalist Brad Gushue followed up his Beijing bronze with an even more impressive — and unprecedented — achievement.

After vice skip Mark Nichols tested positive for COVID-19 in the middle of the Canadian championships, Gushue and his two remaining teammates won the event short-handed.

“What the three of us pulled off here the last few days — man, oh man, it’s pretty crazy,” Gushue said after beating the hometown team skipped by Kevin Koe 9-8 in extra ends on Sunday in Lethbridge, Alberta.

“Once Mark went down, it was a huge long shot for us,” Gushue said. “But, to be honest, I think it kind of inspired us and we found some extra energy and we knew we had to be our best.”

Playing short-handed is not uncommon in sports — think soccer after a red card, or the penalty kill in hockey — but doing it for an extended period at the highest level is rare.

Team Gushue needed to do it for four matches, with the national title and a spot in the world championships at stake.

“That was a big mountain to overcome when Mark got sick,” said Brett Gallant, the team’s second. “With one less player, you’re just thinking a little bit more and trying to do a few other jobs. It was a draining last couple of days, but I’m definitely on a high right now. I can’t believe we got that done.”

Although mid-tournament curling replacements are relatively unusual, teams bring an alternate to most major events in case of injury or ineffectiveness. Gushue’s alternate at the Beijing Games was Mark Kennedy, who won a gold medal in 2010 in Vancouver and was competing at his third Olympics.

But Kennedy, a three-time Brier winner, was already entered in this year’s event — as the third for the North Ontario team skipped by Brad Jacobs. With less than a month after the Olympics, there wasn’t enough time for Gushue to work in a different alternate.

So they showed up in Lethbridge with just the usual four-man team.

And that probably would have been fine, before the coronavirus pandemic.

“I didn’t give us any shot,” Gushue said. “Anybody that plays at this level knows how difficult it is to play at this level with four players. When you take one player out, especially of Mark’s caliber, the level of precision just goes down. And it didn’t go down very much.”

First held in 1927, the Brier has been called the toughest curling tournament in the world, with thousands of Canadians playing in zone, district and provincial qualifiers in the hopes of competing for the national championship.

Gushue has won the Brier three previous times with Nichols, Gallant and Geoff Walker — the same group that won bronze in Beijing last month. (Gushue and Nichols won gold together at the Turin Olympics in 2006.)

The foursome finished 8-0 in the round robin at this year’s Brier before Nichols came back positive for the coronavirus on Friday and was ruled out for the weekend. With Gallant and Walker throwing three stones apiece, Team Gushue lost the opener of the Page playoff, then won three straight elimination matches to claim the silver Brier Tankard.

“Any time you win a Brier, it’s unreal,” Walker said. “The fashion that we did it ... doing this three-handed, it’s just amazing.”

Gushue said Nichols was in touch with the team over the weekend, rooting it on from isolation. He is expected to be back for next month's world championships in Las Vegas.

“The bad thing now is we’ve got to wait a couple days before we can even just embrace him again, give him a hug and celebrate this. Which is unfortunate because he’s a big part of it,” Gushue said. “We won eight games in a row, never lost a game with him in the lineup. Even though we pulled this off, we’re a better team with him in the lineup.”