Olympic curling is a family affair for US women and others 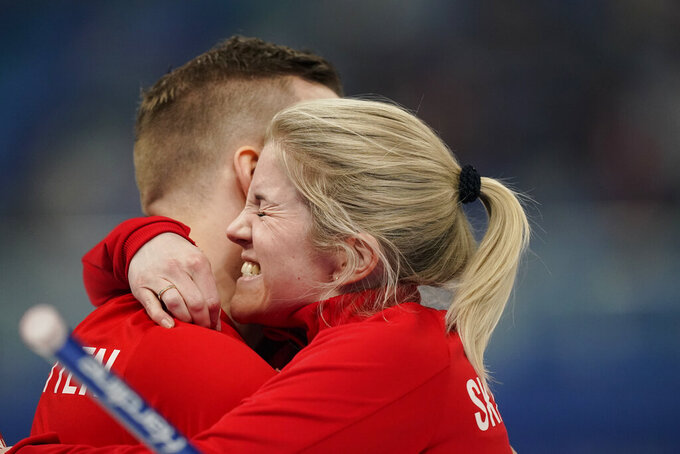 Kristin Skaslien, of Norway, celebrates with teammate Magnus Nedregotten, after a win against Britain during the semi-finals round of the mixed doubles curling match against at the Beijing Winter Olympics Monday, Feb. 7, 2022, in Beijing. (AP Photo/Brynn Anderson)

BEIJING (AP) — When she settled into her room at the athlete’s village in Beijing, American curler Nina Roth decorated a wall with family photos to remind herself of the support she has back home.

Her teammates brought the real thing.

Skip Tabitha Peterson needs only to look down the ice for a comforting face: Her sister, Tara, is also on the U.S. women’s team. Becca Hamilton’s brother is playing for the American men, giving them something most athletes at these Olympics can’t have — family in Beijing to support them.

“To be able to lean on my brother — and I guess it’s the same for the sisters on my team, they have each other — it’s just awesome to have some sort of family here,” Becca Hamilton said. “I mean it’s not always rainbows and butterflies. But for the most part, it’s great.”

Much like last year’s Summer Games in Tokyo, the Winter Olympics are being played in only partially filled venues and without foreign fans. China has also imposed travel restrictions in an attempt to control the spread of COVID-19.

That forced most athletes to leave at home the small entourage of friends and relatives that would ordinarily accompany them to the Olympics — part of the payoff for helping them reach the pinnacle of their sport.

“This is such an opportunity, that our family members also work for, and none of us would be able to do this without their support,” said Roth, who also competed in Pyeongchang. “It was really good fun to celebrate with them at the last Olympics. So it’s a big bummer that they can’t be here this time.”

But some of her teammates found the perfect way to get around the restrictions. The Hamiltons competed as a mixed doubles pair four years ago and are still spending plenty of time together at these Olympics.

“I’ve got, like, one of my best friends and my curling partner here,” Matt Hamilton said. “Not only do I have a sister and a confidant in here, I’ve got someone who’ll do my laundry. ... So she really takes care of me while we’re out here.”

They aren't the only families hanging out at the Ice Cube curling venue this month.

And the Danish women’s curling team also includes a pair of sisters, Madeleine and Denise Dupont.

“I think it just makes the bond between us a lot stronger,” Madeleine Dupont said. “I can’t imagine not seeing her all the time.”

A niche sport played mostly in a few colder climes, curling has long been a family affair, passed down from parents like a treasured heirloom or favorite recipe.

“I remember staying up late, understanding that something cool had happened,” said Vaagberg, who was 7 at the time. “That’s something very unique with curling, a tight family bond all over. So you play against the people that played against my father at the time, and their sons and daughters, it’s quite cool.”

The Petersons’ mother grew up in Winnipeg, Manitoba, and picked up curling from her father. She taught it to her daughters, who started when they were 10 and 8; a brother, Trent, also curled for a while before turning to professional golf.

“You’re kind of born into the sport,” Tara Peterson said.

While siblings might be expected to team up, there's no guarantee that they'll get along over the hundreds of hours they spend together practicing, playing and traveling to tournaments each year. Tensions between any set of teammates can boil over — even before adding in the additional resentment over who wrecked the family car or neglected to take out the trash.

Madeleine Dupont said she and her sister used to fight about curling until their mother would give them a time out.

“When we were young, 100%, my mom was always like, ‘Now we need curling-free time. You can’t talk about curling all the time,’” she said. “Now we all live separate places, so it’s not a problem anymore. But it’s still hard to just leave it at the rink.”

Nedregotten said he and Skaslien do what they call a “hot wash” — talking out their feelings before moving on to the next match. Mostly, though, the siblings and spouses say teaming up with a relative might even offer a competitive edge.

“We’re on the same page a lot without even really need to say anything,” Tabitha Peterson said. “If there is any conflict, or whatever, I think it’s easier as siblings to kind of forgive and forget a lot quicker."

American men’s skip John Shuster is at his fifth Olympics. When he won the gold medal in Pyeongchang, his parents, wife and one of his children were in the crowd. These Games, he is FaceTiming his family from 14 time zones away, while they organize watch parties and special school events to stay connected the best way they can.

“I’ve been fortunate to have them with me at four Olympics,” Shuster said. “This is a chance for them to be at home and experience the Olympics with a lot of friends and family that have never come to the Olympics with us.

“They’re getting a chance to see that other side,” he said. “It’s not better, for sure. But it’s not really feeling any worse, either.”