In an Olympic first, teamwork is the thing for Mongolia 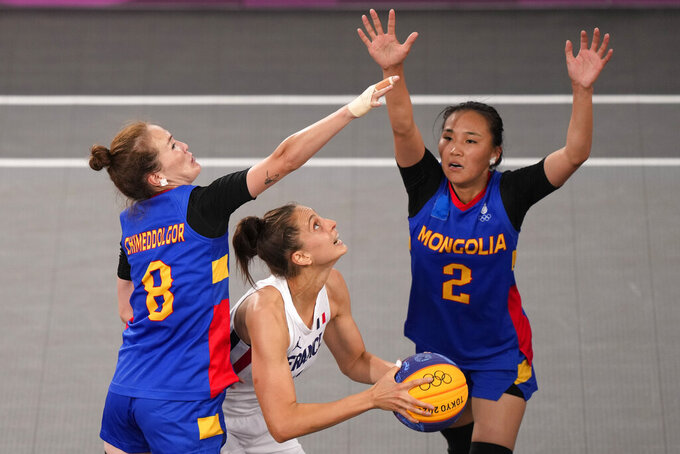 Ana Maria Filip, center, of France, looks for a shot under pressure from Chimeddolgor Enkhtaivan (8) and Tserenlkham Munkhsaikhan (2), of Mongolia, during a women's 3-on-3 basketball game at the 2020 Summer Olympics, Monday, July 26, 2021, in Tokyo, Japan. (AP Photo/Charlie Riedel)

TOKYO (AP) — For decades, Mongolia sent mostly boxers, judokas and wrestlers to the Olympics — athletes doing solo work that, in many ways, reflected the spirit of a nation known for wide-open spaces and a sense of nomadic individualism.

This year, though, teamwork is the buzzword. A group of Mongolian women's basketball players has taken center stage in Tokyo for the nation of 3 million, reimagining what's possible both in their country and on the Olympic stage as a whole.

Led by 21-year-old Khulan Onolbaatar, who last Friday became the first female flag bearer in the country's six-decade history at the Games, Mongolia is one of the eight women's teams playing in the Olympic debut of 3-on-3 basketball.

“A dream come true for us, especially having our first Olympic Games as a team sport,” Onolbaatar said. “And representing our country on the biggest stage possible with team sports. And just being part of that team.”

That Mongolia will not win a medal, and might not even win a game over the course of the five-day tournament that concludes Wednesday, is almost secondary to the big picture this story represents.

When leaders of international basketball federation FIBA introduced this hybrid game to the world more than a decade ago, they did so with a mission of widening the audience for hoops beyond traditional countries, and beyond the urban playgrounds where 3-on-3 built its reputation.

Their success is reflected not only in this discipline's rise into the Olympic stratosphere but also by who is here — and who isn't. The men from the United States — the country where the game was invented and perfected — did not qualify. Mongolia's women did.

“We've already had Olympic champions in boxing and wrestling,” said Tulga Sukhbaatar, the Mongolian coach who must watch the games from the stands, as dictated by the 3-on-3 rules. “But now every Mongolian says 'Now I might want to play basketball, too.'”

Onolbaatar only started about four years ago. She grew up loving the NBA, which has been as aggressive as any U.S. sports league in spreading its tentacles through Asia and the rest of the world. Meanwhile, Onolbaatar's older brother had already caught the bug and was part of the national team, “and you always look up to your older siblings and want to do what they do,” she said.

The notion she might someday play in an Olympics?

“That was a faraway dream. It was unreachable. It wasn't something I thought about. I'd never even watched the Olympics,” Onolbaatar said.

Now, she's in them, and but for a few bounces here or there, the men's team might be, too. They were the top-ranked team in Asia and the top-seeded team heading into an Olympic qualifying event earlier this year, but fell short, much the way the U.S. men did in a different Olympic qualifier.

By then, Mongolia's women had long secured their spot in the field, due to high world ranking that's part of a labyrinthian system that was tilted to benefit nations that don't have long resumes in international hoops.

“We've been pleased to see the quality of play from countries that are not traditional powers,” FIBA secretary general Andreas Zagklis said during a news conference over the weekend.

The Mongolian women have gotten a good dose of how the competition picks up once Olympic gold medals are on the line. Through the first three days of the event, they have played six games and lost all six. The U.S. women, meanwhile, came in seeded last but started 5-0.

To further magnify what the Olympics can mean for a sport, First Lady Jill Biden was in the stands on the first night to watch Team USA in action. Mongolian Prime Minister Oyun-Erdene Luvsannamsrai was there the second evening.

“He told us, ‘You girls are making history and you are doing great,’” Onolbaatar said. "We feel great as a team, making history on the biggest stage possible. But I didn’t know he was watching. If we did, we would have been even more nervous.”

The coach, Sukhbaatar, envisions a day when the stage might not feel so big for Onolbaatar and those who come after her. Hoops is thriving in their hometown, the capital city of Ulaanbaatar, where about half the country's population lives and where blacktop and concrete abounds.

Add a hoop, a ball and a dream, and some more kids from Mongolia could end up in this spot, too.

“A lot of basketball experts say it's almost impossible to get a player to improve the way we have in three or four years, but we're doing it,” Sukhbaatar said. “There's a younger generation learning now. I think we'll come back to the Olympic Games much stronger — in ‘24, and ’28, and '32.”