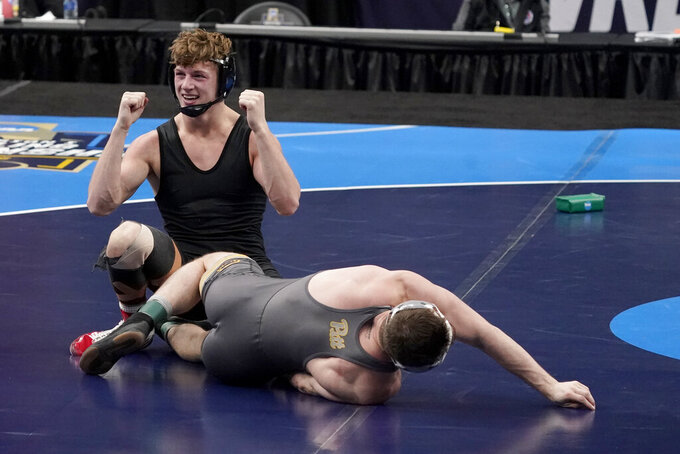 FILE - Stanford's Shane Griffith celebrates after defeating Pittsburgh's Jake Wentzel during their 165-pound match in the finals of the NCAA wrestling championships in St. Louis, in this Saturday, March 20, 2021, file photo. Griffith wore a black singlet minus the Stanford logo as a statement after the school announced in July that wrestling and 10 other sports, most of them that produce athletes for the U.S. Olympic team, would be dropped to save money. (AP Photo/Jeff Roberson, File)

The Stanford logo was missing on Shane Griffith's all-black wrestling singlet when he won an NCAA national title last month.

By design. To draw attention.

He also celebrated his victory at 165 pounds by donning a black sweatshirt which read: “Keep Stanford Wrestling.”

Griffith's way — his team’s way — of making a statement after the school announced in July that wrestling, which has been at Stanford since 1916, and 10 other sports would be dropped to save money. The Cardinal wrestling community organized fundraising efforts and has raised about $12.5 million so far.

The program may not be pinned to the mat just yet — or so they're optimistically hoping.

“We’re still in confusion and kind of in denial of what happened,” said Griffith, who competed on March 20 in what — for now — could be the last match in program history. “Because we don’t have a feasible answer from them to move on with our lives.”

Stanford wrestling is one of at least 85 Division I sports programs to be shuttered since the coronavirus pandemic started a year ago because of financial strains. Olympic and college-sports leaders fear it will only continue as changes in the college system take hold. Congress and the NCAA are considering allowing athletes to benefit from their name, image and likeness (NIL). There are also proposals in Congress that would allow schools to pay players beyond the scholarship and stipends they already receive.

On the line is an Olympic feeder system that buoys Team USA. Nearly 80% of U.S. athletes at the 2016 Rio Games came from an American college program.

Along with wrestling, Stanford announced it would discontinue at the conclusion of the academic year men’s and women’s fencing, field hockey, lightweight rowing, men’s rowing, co-ed and women’s sailing, squash, synchronized swimming and men’s volleyball.

In an open letter sent to the school community, Stanford leaders announced, “We now face the reality that significant change is needed to create fiscal stability for Stanford Athletics.”

Many in the community questioned the legitimacy of the administration's arguments.

That includes those involved with the “Keep Stanford Wrestling” efforts.

“There’s no way this is a financial decision. It can’t be,” said Robert Hatta, a former Stanford wrestler who's co-chair of KSW. “We offered a financial solution that they refused to consider and when we peeled back the numbers we found the savings were minimal and the actual underlining financial issue deficits of the department not only continue but grow after these cuts.”

In a statement to The Associated Press, Stanford disagreed with that assessment: “Discontinuing sports was an extremely painful decision, and it was driven by the financial challenges of supporting twice as many varsity teams as the Division I average at the level we believe is essential for our student-athletes to excel. The fundraising numbers cited by groups that have organized to reinstate individual sports have significantly underestimated the total amount of funding required to support the program they wish to reinstate, and do not account for the need to adhere to Title IX gender equity requirements.”

Here's a sign of potential progress, though: An invitation to be among those who speak next week with Stanford’s board of trustees. Hatta said the meeting was at the behest of school president Marc Tessier-Lavigne.

“We’re hopeful they're ready to talk and not hear us out and say, ‘What’s done is done and we’re sorry' versus actually consider the solutions we’ve recommended," Hatta said. “We're ever optimistic. We're never going to quit.”

Griffith was on the beach at the Jersey Shore when he got a July text from his coach to jump on a call — immediately.

“So you’re thinking, ‘OK, it’s summer, this can’t be good at all,’” Griffith recounted.

Still, the team persevered this season, even training outdoors — sometimes in the rain — due to COVID-19 restrictions within the county. All this under the pressure of the program facing elimination. The Cardinal finished 17th as a team at nationals, their fourth-best mark in school history.

“The ‘We can’t compete and carry these sports’ argument went away when Shane won a national championship,” Hatta said. “These teams are perennial national title contenders.”

Griffith remembers growing up and watching the NCAA national championships. He couldn't wait to be on that stage.

There he was, singlet minus the Stanford logo and all, as the No. 8 seed working his way through the tournament bracket. He knocked off the top see in his weight class — Alex Marinelli of Iowa — and beat third-seeded Jake Wentzel of Pittsburgh in the final.

“It was more about going out there every match, every practice, every team meeting for us,” explained Griffith, who focused on a national title over trying to qualify this summer for the Tokyo Olympics. "It was no longer about the university itself because they obviously didn’t care about us much.”

In the wake of the cuts, Griffith's accelerated his educational path. He's scheduled to graduate early with a degree in science, technology and society.

That way, if the program doesn't get reinstated, he can transfer for graduate school.

Before Griffith, the only other Stanford wrestler to win an NCAA national crown was Matt Gentry in 2004. Gentry recently took to social media to air his thoughts.

“The Stanford I know is a place that prides itself on integrity, holds itself to a higher level of accountability than its peers, and makes value-based decisions," Gentry wrote in a series posts on Twitter. “It is easy to maintain those principles when times are easy, but difficult times are defining times.”

For Griffith and his teammates, they just want an explanation.

"We don’t really know the true reason why we were cut,” Griffith said. “That’s the ultimate answer we’re looking for — besides being reinstated as a program.”