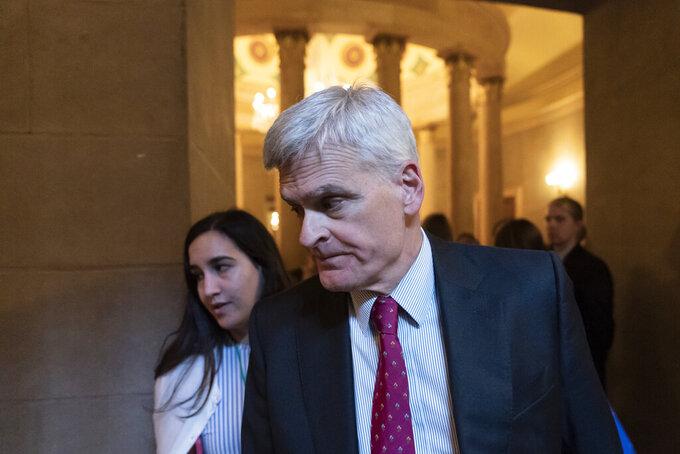 Sen. Bill Cassidy, R-La., arrives for a meeting at the Capitol in Washington, Wednesday, June 23, 2021. Congressional negotiators and the White House appear open to striking a roughly $1 trillion deal on infrastructure, but they are struggling with the hard part — deciding who will pay for it.(AP Photo/Alex Brandon)

WASHINGTON (AP) — Joe Lieberman was back on Capitol Hill on Tuesday testifying in support of the Democratic push for Washington, D.C., statehood. Then he met privately with Sen. Lindsey Graham, one of the many Republicans who fiercely oppose such a move.

It was a classic agenda for Lieberman, the former Democratic — and later independent — senator from Connecticut who made his reputation building relationships with Republicans. But in a hyperpartisan era, the approach is becoming a relic, a risk underscored later in the day when the GOP united to block a voting rights bill that Democrats say is essential for democracy.

“There have to be people in both parties who talk to each other, negotiate, compromise,” he insisted.

The debate over whether and how the parties should cooperate is coming to a head as a summer legislative flurry intensifies in Congress. The infrastructure package that is one of President Joe Biden's top priorities may suffer the same fate as the voting bill, emboldening Democrats to move on their own. Many progressives want Democratic leaders to end the procedural hurdle known as the filibuster that allows the GOP to stymie the majority's priorities.

Amid the tension, a small group of lawmakers has huddled privately on infrastructure in recent months to test a different approach. Led by GOP Sen. Bill Cassidy of Louisiana along with Reps. Josh Gottheimer, D-N.J., and Brian Fitzpatrick, R-Pa., they have focused on bridging both the partisan divide and the cultural hurdles in Congress that often prevent members of the House and Senate from working together.

“This is a great example of finding common ground,” Cassidy said during a Wednesday meeting. “We've still got obstacles, let me just say that, but I am just hopeful that we can do this.”

Their success is far from certain. Already, a group of 21 senators from both parties is working with the White House to finalize an infrastructure deal. The senators reached a tentative framework for a deal Wednesday, and Biden invited members of the group to the White House on Thursday.

Heading into next year's congressional primaries, there's not much energy in either party's base for centrist politics. But the effort is notable for its buy-in from both ends of Capitol Hill.

In one of the bizarre truisms of Washington, as divided as Democrats and Republicans may be, the deeper split can often be between rank-and-file members of the House and Senate. They work in the same building but belong to chambers with different customs.

In the House, the majority almost always carries the day and political pressures are never far away, with members facing an election every two years. The Senate in modern times typically requires the consent of 60 members to accomplish almost anything and members face voters every six years.

The result is a legislative body that is often at odds.

“Even though we're just a few feet away from each other, it's like you're in two different universes,” Gottheimer said.

That began to change last year when some members of the House and Senate collaborated to reach an agreement on coronavirus relief. With that experience in mind, Cassidy, Gottheimer and Fitzpatrick found themselves among dozens of governors and members of Congress from both parties who descended on Annapolis, Maryland, in April for an infrastructure summit hosted by Gov. Larry Hogan, a Republican who has decried intense partisanship.

“The No. 1 problem we face in America is really the toxic politics,” Hogan, who may eye a run for the 2024 Republican presidential nomination, said in an interview. “We're so far divided, and nobody seems to ever want to work together to get things done.”

After the gathering, No Labels, a political group focused on bipartisanship, facilitated additional conversations among Cassidy, Gottheimer and Fitzpatrick. While other talks, including those between Biden and GOP Sen. Shelley Moore Capito of West Virginia, garnered more attention, the other group kept in touch largely out of sight.

Although the House-Senate conversations are limited to just a few members, those lawmakers are connected to larger groups that could prove important in determining whether an infrastructure bill advances in a narrowly divided Congress or remains a punchline for dysfunction.

Cassidy is among the 21 senators involved in negotiations with the White House while Gottheimer and Fitzpatrick are members of the Problem Solvers Caucus, a group of 56 lawmakers in the House made up of 28 Democrats and 28 Republicans. Gottheimer and Fitzpatrick have participated in meetings with the 21 senators and have shepherded information back to their House colleagues.

“It’s really fair to say, yes, we were both reporting back to our respective groups and kind of helping negotiate a package,” Gottheimer said.

For now, it's unclear whether anything that his group has discussed will become law.

Over the past decade, much-heralded bipartisan pairings have failed to deliver on such issues as immigration and government spending. The Trump era deepened the split between the parties, and mistrust among lawmakers has soared in the aftermath of the deadly Jan. 6 riot at the U.S. Capitol by the former president's supporters.

“They’re in a much tougher environment than we were in 30 years ago,” said former Democratic Rep. Dick Gephardt, who was the House Democratic leader from 1995 to 2003.

And while bipartisan groups can garner attention, they also attract suspicion, conjuring images of backroom deals being made without much scrutiny.

That's especially true after The Intercept reported leaked audio earlier this month of a meeting hosted by No Labels in which Sen. Joe Manchin, D-W.Va., seemed to suggest to donors that they should try to persuade Sen. Roy Blunt, R-Mo., to vote to support an independent commission to probe the Jan. 6 riot at the U.S. Capitol.

Manchin's representatives have denied that he was seeking donations and Blunt joined every other Senate Republican in opposing the commission. Lieberman, a co-chair of No Labels, told reporters that he's never heard the organization's members “raise a question related to their business.”

Regardless of whether the conversations that Gottheimer, Fitzpatrick and others are having result in provisions that become law, those involved say there are bigger issues at stake. Fitzpatrick framed the work as a way to push back against ideological extremes in both parties.

“If we can get a win here, I think it will send a very loud message that if the centrists stick together we can overcome the fringes,” he said. “The battle is not between Democrats or Republicans; it’s centrism versus extremism.”