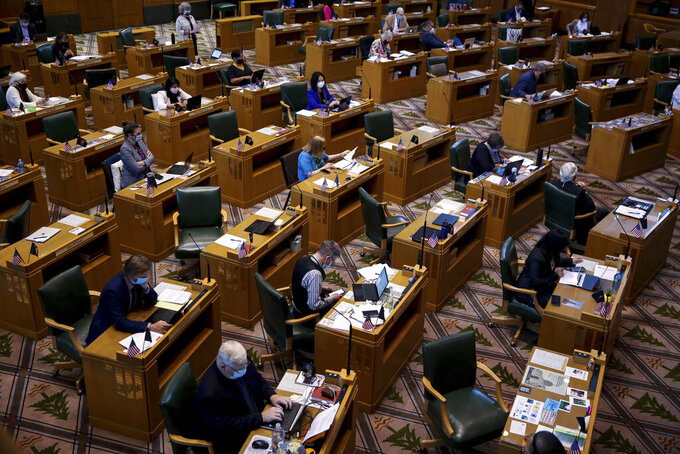 In this Wednesday, June 23, 2021, photo, lawmakers meet in the Oregon House of Representatives during the legislative session at the Oregon State Capitol in Salem, Ore. (Abigail Dollins/Statesman-Journal via AP)

The session was also marked by COVID-19 scares, tension between majority Democrats and Republicans and the expulsion of a lawmaker who let rowdy protesters into the Capitol.

“This session has been unlike any other in Oregon history," said House Speaker Tina Kotek, D-Portland.

On Saturday the Legislature passed House Bill 2021, which would require the state to transition 100% of its electricity generation to clean, renewable sources by 2040. Advocates say that would be the fastest such transition in the country, but opponents worry the push will lead to higher energy prices.

This session was unlike those in the past as the Capitol in Salem was closed to the public for the entire session, which began in January, because of COVID-19 restrictions. Even with precautions in place, floor sessions were cancelled multiple times because of positive coronavirus tests among people who were allowed to work in the Capitol.

The session was also notable as it saw the state House expel a Republican member who let violent, far-right protesters into the Capitol on Dec. 21. On June 11 Rep. Mike Nearman was removed by a 59-1 vote, marking the first time a member has been expelled by the House in its 160-year history. The only vote against the resolution for expulsion was Nearman’s own.

Nearman, who police say let protesters inside the building, has argued the Capitol should be open.

But even Republicans, who are often opposed to Democratic initiatives on climate change and some other bills, said the crowd outside the Capitol that day was not made up of constituents who wanted to peacefully engage in the democratic process. Some were carrying guns.

In the House and Senate, where Democrats hold strong majorities, the GOP used slowing tactics — refusing to suspend the full reading of proposed bills aloud before a final vote, a maneuver that added hours to the passage of even simple bipartisan legislation — to thwart legislation they didn’t like.

In response, hours worth of bills were read by computer rather than clerks.

For the past two years, Republican state senators staged walkouts to deny the chamber a quorum. During the debate over measures that ban guns from the Capitol and mandate the safe storage of guns, five Republican senators did not attend. However, six did. The GOP senators that attended have since faced death threats and recall petitions from their own party.

Guns were not the only topic that drew passionate statements from lawmakers this session — especially in a year with a deadly pandemic and racial awakening.

A package of police reform bills was passed that includes requirements that police officers assigned to crowd control during protests must be clearly identified by name or badge number; another provision requires all new police officer background checks must include a scan for membership in hate groups; and one that strengthens police misconduct reporting requirements.

Lawmakers worked to keep people housed during the pandemic.

Among the notable measures passed during the 2021 Legislature was a pause of some evictions during the pandemic for 60 days for tenants who have applied for rent assistance. Legislators also reinstated and extended the Oregon foreclosure moratorium.

In addition, lawmakers passed bills making it easier to site shelters in different neighborhoods and a bill that makes it more challenging for cities and counties ban homeless people from sitting, sleeping and camping on public property. Several Oregon cities like Portland, Salem and Eugene have seen significant issues with homelessness and outdoor encampments.

Lawmakers allocated $150 million to help find homes for people displaced in the September 2020 wildfires and $75 million to support them in the short-term.