Out of sync: COVID distancing a drag for artistic swimmers 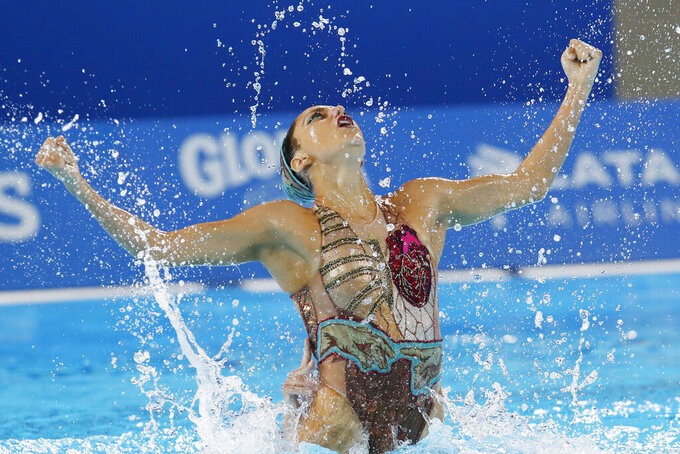 FILE - In this July 31, 2019, file photo, Ruby Remati of the United States competes in the artistic swimming duet technical routine final at the Pan American Games in Lima, Peru. Most Olympic athletes saw their preparations for Tokyo upended by the pandemic. But artistic swimmers were hit particularly hard. Closed borders, lockdowns and social distancing were alien concepts to athletes accustomed to being inches apart and, quite literally, in sync. (AP Photo/Moises Castillo, File)

SYDNEY (AP) — They slice through the water as one, less than an arm’s length apart.

With their dreams of an Olympic medal contingent upon coordination and closeness, artistic swimmers training for Tokyo knew the drill: Move faster, lift higher and leave as little space between teammates as possible.

Most Olympic athletes saw their preparations for Tokyo upended by the pandemic, but perhaps none more so than artistic swimmers, once known as synchronized swimmers.

Closed borders, lockdowns and social distancing were alien concepts to athletes accustomed to being inches apart and, quite literally, in sync.

“We need to be super close,” says United States artistic swimmer Anita Alvarez. “Which is hard with the whole COVID thing.”

Suddenly separated by pool lanes, and in some cases, thousands of miles, artistic swimmers faced a daunting task: How to prepare for the Olympics in a sport that prizes proximity during a pandemic that demands distance.

For most, though, it meant months out of the pool — the longest many had ever been landlocked. And for artistic swimmers, no amount of virtual workouts can replace training in tandem.

The athletes perform to a very specific count, so learning to move together in the pool and change patterns in unison is much more difficult when apart, says Canada Artistic Swimming spokesman Stéphane Côté.

“It definitely was an extra challenge for us. We’re not individual athletes,” Alvarez says. “Other athletes who are team sports, they can train individually and they can come together. For us, it’s so important to have that connection with your duet partner and your teammates, to be able to synchronize and to be on the same note.”

Artistic swimming’s rapid evolution from a performance-based spectacle to an intensely athletic and demanding sport has led to a greater focus on making the routines more difficult, which nets higher scores. And the closer and more interconnected the swimmers, the more difficult the moves.

A few decades ago, swimmers were so far apart they took up the entire pool, says French former synchronized swimmer Christina Marmet, who runs the insidesynchro.org site.

Marmet recalls a conversation she once had with an artistic swimming judge: “She remembered a competition in the ’80s where a team from Korea arrived and they were very close and very tight in the pool, and everyone thought they were crazy because they were going to hit each other,” she says. “But now everybody is like that.”

Like many athletes, Alvarez and her duet partner, Lindi Schroeder, found themselves isolated from each other and the rest of their team, as the pandemic forced much of the U.S. population into lockdown. Pools were closed.

Zoom workouts replaced in-person training, but because of the delays inherent to video calls, it was impossible to do any synchronizing work, Schroeder says. The team focused instead on flexibility and strength, training four to five hours a day virtually.

“I remember the first two weeks, all of my joints just hurt the whole time because they weren’t used to any type of impact,” Schroeder says.

In the summer of 2020, the community pool in their California neighborhood reopened. But after three months on land, the water felt foreign.

Each evening, they waited until the pool was deserted before heading down with their coach. It was less than ideal: The pool wasn’t deep or long enough, and the water — unlike the heated pools they typically train in — was freezing. Their wetsuit shirts did little to stop their muscles from tensing up.

With no underwater sound system (used by artistic swimmers to stay in sync with the music while below the surface) their coach was relegated to setting up a Bluetooth speaker by the side of the pool. And the air quality was dismal because of the state’s wildfires.

Once they were able to start swimming alongside their entire team, they took regular COVID-19 tests. Swimmers were separated any time a team member felt unwell or had an elevated temperature.

“There were times we debated the options: Do we start swimming closer together?” Alvarez says. “Every time we ended up not doing that — it’s not worth the risk.”

South African swimmers Laura Strugnell and Clarissa Johnston, who came out of retirement to compete in Tokyo, faced five months of lockdown before the provincial borders reopened and they could travel from Cape Town to Johannesburg to train with their coach.

Both women live alone, so video calls provided a welcome connection. An easing of restrictions eventually allowed them to see each other, though gyms and pools remained closed.

Despite the winter chill, they exercised in Strugnell’s driveway and in the basement parking lot of Johnston’s apartment complex. They leaned against their kitchen counters for backbends and handstands and used resistance bands to practice sculling, the vigorous hand and forearm movements that help propel the swimmers.

“One positive was that we had an extra year to train together,” Johnston said via email. “We also kept proving to ourselves how dedicated we were by overcoming obstacles like closed pools, changing competition dates and curfews.”

Australia’s decision to shut its borders to the world at the start of the pandemic, and its frequent state border closures during COVID-19 outbreaks, proved particularly rough on the country’s swimmers.

In January 2020, the artistic swimming team — whose members are spread out over three states — had planned to gather for six months of training together ahead of the Games.

Instead, COVID-19 left them separated by more than 4,000 kilometers (2,500 miles) as they retreated to their homes.

Attempts to organize training camps were thwarted by state border closures. And Australia’s strict rules governing travel exemptions to its international border closure led to a three-month delay in the arrival of the coach the team hired from Italy, says swimmer Amie Thompson.

When the team was finally able to get into a pool together in Western Australia, they had to swim in separate lanes to avoid breaching social distancing rules, Thompson says.

Both their coach and choreographer lived in different cities. For months, they brought a laptop to the pool so their choreographer could work with them via Zoom.

In January, the team gathered at the Australian Institute of Sport in the nation’s capital, Canberra. And for the next six months, that is where they stayed, training in relative seclusion to avoid exposure to the virus or the possibility of being separated again by border closures, says Kim Davis, president of Artistic Swimming Australia.

“I think they realized the situation was not ideal, but all of them made the best of it,” Davis said. “Being together now in the past couple months, their spirits are as high as ever and a lot of them are incredibly happy that they made it this far.”