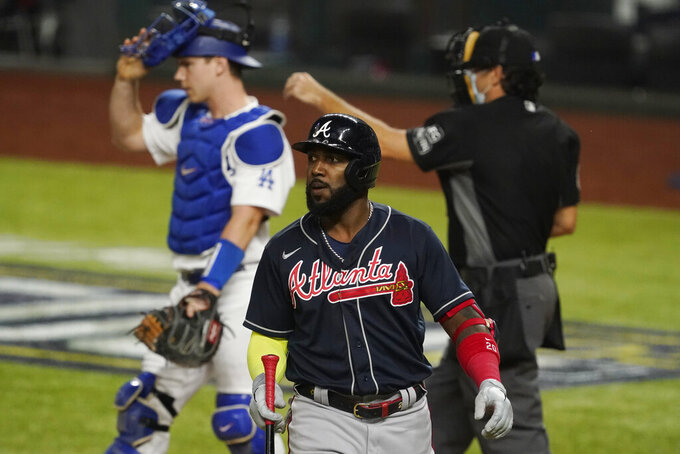 Atlanta Braves' Marcell Ozuna walks to the dugout after striking out during the sixth inning in Game 7 of a baseball National League Championship Series against the Los Angeles Dodgers Sunday, Oct. 18, 2020, in Arlington, Texas. (AP Photo/Tony Gutierrez)

“Alex, I have a question for you,” Ozuma said to Anthopoulos as the two took part in a Zoom call Saturday. “Why didn't you sign me at the end of the season?'"

Instead, the Braves waited until a couple of weeks before the start of spring training to reach a four-year, $65 million deal with a slugger who just missed out on the National League's Triple Crown during the abbreviated 2020 season.

The return of Ozuna ensures the Braves, who have won three straight NL East titles, will remain one of the top championship contenders heading into a new season.

They came up one win short of the World Series a year ago, losing to the eventual champion Los Angeles Dodgers in a seven-game NL Championship Series after squandering a 3-1 lead.

Now, having bolstered their rotation with the free-agent signings of Charlie Morton and Drew Smyly, they've ensured their potent lineup returns largely intact in 2021.

“We have a really good club,” Anthopoulos said. “We have a World Series-caliber club. We need things to break right and so on, but everybody on the roster believes we're capable of winning the World Series.”

The Braves knew they wanted to bring back Ozuna — who led the NL with 18 homers and 56 RBIs and finished third in batting average at .338 — but they were slow to make their move after quickly signing Morton and Smyly to one-year deals at the start of free agency.

Just a few days before the deal with the Braves was finalized Friday, Ozuna expected to playing elsewhere in 2021. He had an offer from the Tampa Bay Rays, but held out for something better.

Finally, the Braves jumped into the mix.

It took only one day to reach an agreement.

“We didn't talk contract until a day or two ago,” Anthopoulos said. “It was done real quick.”

Ozuna, never shy about speaking his mind, jumped in to ask why the deal wasn't done earlier. It was all in good fun, but Anthopoulos said it took a while to sort out payroll considerations heading into another season that will surely be impacted of the coronavirus pandemic.

“At the beginning of the offseason, there was a lot of uncertainty from a team payroll standpoint and an industry standpoint," he said. “When guys get to free agency, it takes time.”

Th Braves also had to consider whether the designated hitter would return in the NL for another season. Ozuna thrived in 2020 while serving mostly as the DH. For now, that one-year experiment is off the table after the players rejected a proposal to delay the start of the regular season.

Unless there's a change of course, Ozuna will start for the Braves in left field, where his defensive limitations will surely be in the spotlight.

Anthopoulos danced around that issue when asked if there were any concerns about Ozuna holding down a full-time defensive role.

“We feel like when Marcell is in left field, he's solid," the GM said. “He's worked hard with all our coaches so he can continue to be a great player offensively, defensively and running the bases.”

While Ozuna's defense could be an issue, there is no question about his impact on the Braves' offense.

Batting behind Freddie Freeman, Ozuna was a major reason why the Atlanta first baseman captured the NL MVP award.

If Ozuna had gone elsewhere, the Braves would have been left with a huge hole to fill. Now, they return a lineup that features four players who reached double-figure homers in the 60-game season and scored just one less run than the major league-leading Dodgers.

But Ozuna's impact goes beyond his impressive numbers. He quickly became one of the most popular players in the Braves clubhouse, adding even more fire to a young, confident team with his various celebrations.

From his “mix it up" mantra to posing for a “selfie” on the basepaths after hitting a playoff homer, Ozuna's flair was apparent almost every time out.

After initially signing Ozuna to an $18 million, one-year deal, the Braves were willing to go long term to keep the 30-year-old in Atlanta.

“We needed that season to feel comfortable about giving him this type of contract," Anthopoulos said. “Where we are as a team, where he is in his career, where we are with our core, he fits really well.”