Pandemic disrupts rites of passage for many devout families 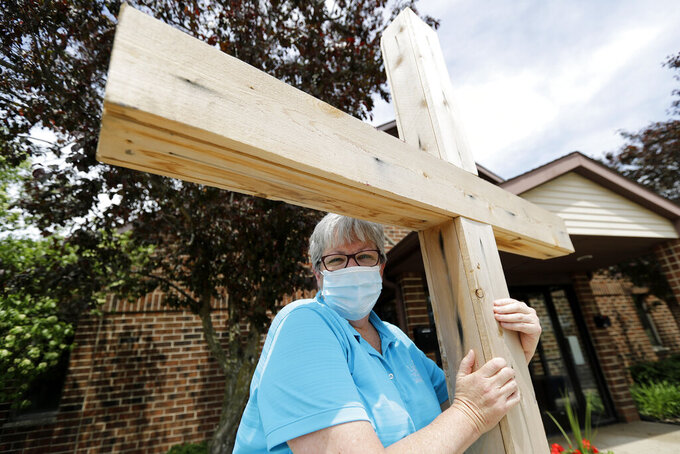 Associate Pastor Sharon Rogers poses for a portrait with a cross at Light of Christ Lutheran Church in Algonquin, Ill., Sunday, May 24, 2020. “The church is not a building, the church is people,” said Rogers, explaining why parents had embraced the idea of an outdoor service for their children's upcoming confirmation ceremony. (AP Photo/Nam Y. Huh)

NEW YORK (AP) — For many religious families across the United States, the coronavirus has disrupted their most anticipated traditions – the rites of passage that mark their adolescent children’s full entry into their congregations.

With most houses of worship halting large in-person services due to the outbreak, some bar and bat mitzvahs have been conducted via Zoom rather than before a throng of well-wishers at the families’ synagogue. Many confirmation ceremonies at Christian churches have been postponed until fall, at least one was held on Zoom, and an Evangelical Lutheran Church in America congregation near Chicago will hold its confirmation service in the church parking lot.

Sharon Rogers, associate pastor at Light of Christ Lutheran Church in Algonquin, Illinois, said 23 children – mostly 13-year-olds – are expected to be confirmed in the parking lot on June 13. Each family will be allowed to bring three vehicles, parking in every other space in deference to social distancing.

The children, accompanied by their parents and baptismal sponsors, will emerge one group at a time from their cars to approach the two presiding pastors, who will forgo the traditional act of laying hands on the children.

“The church is not a building, the church is people,” said Rogers, explaining why parents had embraced the idea of an outdoor service.

“For me as a dad, it's different, but we’re happy about it, rather than cancelling or delaying it,” said Leon Redobos, whose 14-year-old daughter Lindsay will be confirmed.

“This rite of passage -- it’s really between my daughter and God,” he said. “We just need a place where we can be surrounded by people who love you and want to support your faith.”

Each confirmand has selected a Bible verse to guide their life. Redobos said Lindsay had chosen Luke 1:37: “For with God, nothing shall be impossible.”

A neighboring ELCA church — St. Barnabas in Cary, Illinois -- held classes for its eight confirmation students over Zoom. A First Communion service will be held via Zoom June 7, but Pastor Sarah Wilson said the full-scale confirmation service is now scheduled for Oct. 31

Wilson found it challenging to lead the online class sessions.

“It was hard for kids to learn how to use Zoom, then they learned how to use it really well,” she said. “I think some of them were gaming during class.”

Rev. Jenny Hallenbeck Orr, who serves McCabe United Methodist Church, decided to postpone the ceremony until later in the summer, or in the fall. Legacy UMC held the first part of confirmation in a Zoom call with more than 70 participants . Rev. Brandon Vetter, Legacy’s lead pastor, said a follow-up in-person ceremony was planned for later.

In Encino, California, where Valley Beth Shalom normally celebrates several bar mitzvahs a month, Rabbi Noah Farkas says there have been various responses from families unable to hold ceremonies in the synagogue.

He said some families postponed ceremonies until later this year, some celebrated in their backyards only with people from their household, others conducted ceremonies online.

“This pandemic is hitting us all differently, and a one-size-fits-all mentality just can’t work right now,” Farkas said via email.

One mother, Deb Levy of Montclair, New Jersey, wrote a piece for The New York Times about having an online bar mitzvah for 13-year-old son Zane in March because their synagogue was off-limits for big gatherings.

With just a few people on hand in the synagogue, the service was live-streamed to a far-flung array of friends and relatives. Levy tallied 248 notes sent by well-wishers who watched.

“This wasn’t the bar mitzvah we planned. But it was better than anything we could have imagined,” Levy wrote.

In suburban Atlanta, the Duke family decided to livestream 12-year-old Lila Duke’s bat mitzvah from home. The event was chronicled by The Jerusalem Post, which said the service was enlivened midway through when the family’s cat jumped atop a table to make an unscheduled appearance.

For Reform Judaism, the days around the upcoming holiday of Shavuot normally would have been occasion for confirmation ceremonies at synagogues, in which teens affirm their commitment to the Jewish people. This year, some synagogues will conduct the services on Zoom or Facebook Live.

The pandemic has prompted many Roman Catholic churches to postpone First Communion and confirmation services.

In hard-hit New York City, no rescheduling date is set yet. In the Diocese of Knoxville, Tennessee, there’s hope that confirmation services can take place June 27.

One festive rite-of-passage event in Tennessee has been canceled altogether due to the pandemic -- an annual procession through the streets of Chattanooga by hundreds of parishioners of the Basilica of Sts. Peter & Paul, celebrating the children participating in their First Communion ceremony.

The basilica’s pastor, David Carter, said this year’s group of children will celebrate First Communion on June 13, with plans to live-stream the Masses because in-person attendance will be tightly restricted.

At Memorial Lutheran Church in Houston, the confirmation service for about a dozen children had been scheduled for this Sunday but is now planned for late September.

“We made that decision early in the pandemic, knowing it would be difficult for people like grandparents, godparents and other relatives to rearrange their travel plans to attend,” said the senior pastor, Scott Murray. His congregation is part of the Lutheran Church-Missouri Synod.

Some parents acknowledged disappointment at the delay, but Murray said they were understanding, and did a good job at their homes administering memorization tests for their children - a key part of confirmation classes that normally take place at church.

One mother, Dana George, said the delay was “bittersweet” for her and husband, Scott, who were eagerly anticipating the confirmation of their 14-year-old son, Braden.

“We know by now what we plan for ourselves is not God’s plan,” she said via email. “Some see this as a disaster but my family knows we will make it through stronger in our faith.”