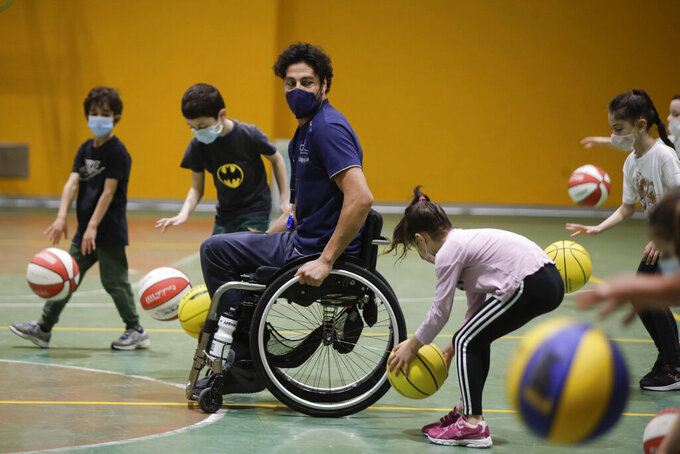 Adolfo Damian Berdun, of Argentina, a professional player and captain of the Argentine basketball Paralympic team, teaches children basketball at a primary school in Verano Brianza, on the outskirts of Milan, Italy, Tuesday, May 11, 2021. Four second-grade classes in the Milan suburb of Verano Brianza have been learning to play basketball this spring from a real pro. They also getting a lesson in diversity. Their basketball coach for the last month has been Adolfo Damian Berdun, an Argentinian-Italian wheelchair basketball champion. Berdun, 39, lost his left leg in a traffic accident at ag 13 in his native Buenos Aires, and he has visited many schools over the years to discuss how he has lived with his disability. (AP Photo/Luca Bruno)

VERANO BRIANZA, Italy (AP) — Four second-grade classes in the Milan suburb of Verano Brianza have been learning to play basketball this spring from a real pro. They also got a lesson in diversity.

Their coach for the month of May has been Adolfo Damian Berdun, an Argentinian-Italian wheelchair basketball champion. Berdun, 39, lost his left leg in a traffic accident at age 13 in his native Buenos Aires, and he has visited many schools over the years to discuss how he has lived with his disability.

But this time, when he entered the suburban elementary school, Berdun wanted to be simply “coach.”

It was his first time in the role. He declined suggestions of a video introduction, and wheeled himself onto court the first day with a blank slate, no backstory.

“Every class that came in, looked at me with open mouths like they wanted to ask a question,” Berdun said. “I said, ‘We can ask questions later, now we play basketball.’ ”

The head of the sporting association that organized the five-week program recalled the first day. Berdun made a simple introduction, then asked: “’ Do you want to run?’ They said yes, and he said, ‘Run,’” said Elena Sandre. And off they went, starved for action after an academic year mostly bereft of team sports.

Over the five weeks, the children learned to dribble and shoot; passing was limited due to COVID protocols. They lined up for drills, and navigated a slalom course on the gym floor. Berdun lowered two rings on either side of the basket, so kids who couldn’t throw to the 10-foot (three-meter) height of the standard hoop could have a shot.

Sandre got to know Berdun as a journalist covering wheelchair basketball in Italy, first when he was in Rome, then Sardinia and finally when he arrived in the Monza province of Lombardy, where he plays on UnipolSai Briantea84 Cantù. The team won the Italian championship this year, and Berdun was named MVP for the championship. He continues to play on the Argentinian national team, but won’t be going to the Paralympics in Tokyo because his team failed to qualify.

Sandre said she tapped Berdun not because of his disability, but because she had observed the way he commanded whatever team he played on.

“If you see him play, you see he is a coach. He manages the team. He is a leader,’’ she said. He had no trouble handling a sometimes noisy group of 7-year-olds.

“I did not imagine that in a wheelchair, with so many children, I could feel so good,’’ Berdun said.

Even though Berdun held off on discussing his disability until the last day, the lesson of diversity trickled down. Sandre says she sees parents in social media posts talk about how “privileged” their children are to have the experience of learning from a para athlete.

For his last day, the children gave Berdun drawings they had made.

“But the most beautiful thing is that we succeeded in breaking down the barrier between the coach with one leg in a wheelchair, and the ideal of a coach, period,'' Berdun said.

”How do I know this? Because after asking me a couple of questions, they asked if they could continue doing basketball drills. That means they were more interested in playing than in knowing why I only have one leg."