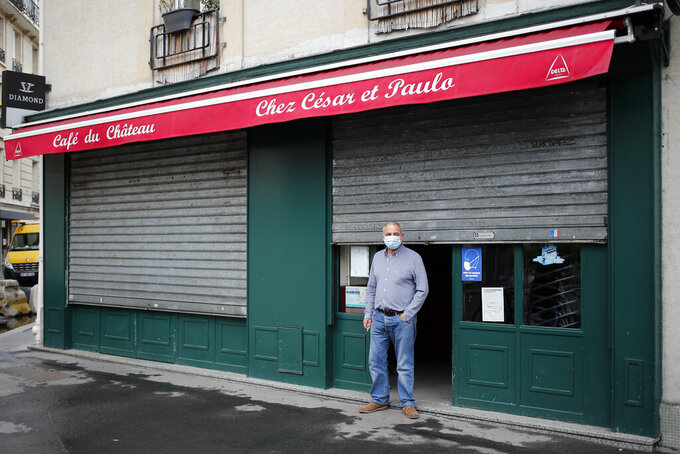 Cesar, from Portugal, stands in front of his closed bar, in Paris, Tuesday, Oct. 6, 2020. French authorities have placed the Paris region on maximum virus alert on Monday, banning festive gatherings and requiring all bars to close but allowing restaurants to remain open, as numbers of infections are rapidly increasing. (AP Photo/Francois Mori)

Hospitals in Paris and its suburbs activated an emergency plan as COVID-19 patients now fill 40% of the region’s intensive care units.

Veran announced new restrictions in areas where hospitals are facing strain and infections are mounting.

Starting from Saturday, the northern city of Lille, close to the border with Belgium, and the cities of Grenoble, Lyon and Saint-Etienne in eastern France will be placed under maximum virus alert, he said. They will join Paris, Marseille and the island of Guadeloupe in the French overseas.

Veran noted some “signs of improvement” in some regions which are seeing infections slowing down after new virus rules were imposed. This includes France’s second-biggest city, Marseille, Nice on the French Riviera and Bordeaux in western France.

“We hope we will be able to announce some good news next week,” he said.

The director of the Paris region public health agency, Aurelien Rousseau, tweeted Thursday that he ordered hospital directors to activate a special emergency plan to free up resources and protect medical staff. The move was necessary, he said, “given the pressure on intensive care units and on conventional hospital activity.”

Each hospital’s emergency plan can include such measures as adding hospital beds, postponing non-urgent surgery, transferring non-COVID-19 patients to other facilities or sending them home, recalling staff from vacation and soliciting help from volunteers, according to the health agency. Such measures were taken in March and April as the pandemic first swept across Europe.

“We are not in a normal time, and we won’t be for several months,” Macron said on national television.

As countries across Europe face resurgent virus cases, the French government is trying to avoid new blanket lockdowns and focusing on more targeted restrictions instead.