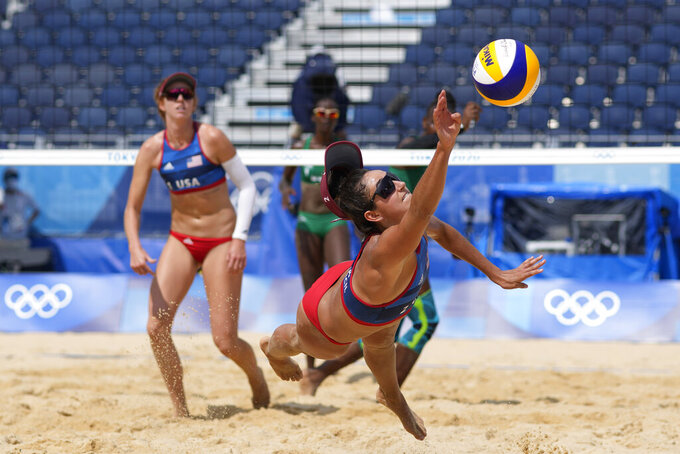 Sarah Sponcil, right, of the United States, stretches out for the ball as teammate Kelly Claes looks on during a women's beach volleyball match against Kenya at the 2020 Summer Olympics, Thursday, July 29, 2021, in Tokyo, Japan. (AP Photo/Petros Giannakouris)

TOKYO (AP) — After beating Argentina to extend his stay at the Olympics, American beach volleyball player Nick Lucena had big plans: Treatment, a shower, “maybe get my nails done, all that stuff.”

“Jerk,” his partner, Phil Dalhausser, muttered under his breath.

While Lucena has the run of the Olympics — at least as much as anyone does with a state of emergency in Tokyo — Dalhausser is stuck in a modified quarantine because he sat on a plane near Taylor Crabb, a fellow beach volleyball player who tested positive for COVID-19 after arriving in Japan.

That means as the teammates were preparing for the Tokyo Games they couldn’t practice together for five days; even now, they can only practice during designated late-night hours after everyone else has left the facility. They still can’t work out with other teams.

When Dalhausser uses equipment, an Olympic worker follows behind to disinfect it. That’s if he has access to equipment at all: He can’t shower at the venue after a match, and the only opportunity to lift weights is a box of bottled water in his hotel room, piled high with books.

All this because he was deemed a close contact of Crabb. Two other U.S. players, Jake Gibb and Kelly Claes, are also in isolation after sitting near Crabb on a plane.

“I’m pretty self-sufficient, but there’s some things I just can’t get to,” said Dalhausser, a four-time Olympian who won the gold medal in 2008. “And that’s been the most challenging part.”

Some of it doesn't make sense to Dalhausser, who spent the week after his arrival in the relative freedom of the athletes village before being whisked away to isolation housing.

“It’s confusing,” Claes said after she and Sarah Sponcil improved to 2-0 with a win over Kenya on Thursday. “They told us eight days after we’ve been in the village, and Sarah and I had been in the same room for eight days. I don’t understand. I’m just doing what I’m told to play.”

In his original quarantine housing, Dalhausser said with his arms spread wide, he could almost touch both walls at the same time.

“We’ll just say it was rough. Then Team USA on the third day busted me out” and moved him to a Hilton, he said. “Everyone’s been super-supportive. I can’t say enough about it. It could be worse, 100%.”

He also noted that Crabb, who actually tested positive for COVID-19, has been released from quarantine and is back home with his family in Hawaii. But Dalhausser, Claes and Gibb are still in the isolation protocol for close contacts.

"Phil’s kind of separated from everything," Lucena said. “If I get into it, I’m just going to get angry and probably swear a couple of times."

Asked if he thought it was a level playing field to compete against teams that have access to treatment and training that he doesn't, Dalhausser said: “It's definitely not level.”

Soon after, Lucena left the area where athletes talk to the media. Dalhausser practically begged reporters to stay.

With the win, Dalhausser and Lucena improved to 2-1 in Tokyo and almost certainly clinched a spot in the medal round. Claes and Sponcil improved to 2-0, dispatching Kenya in just 25 minutes — the fastest women’s match since the Olympics adopted rally scoring and the best-of-three sets format in 2002.

The U.S. pair beat Brackcides Khadambi and Gaudencia Makokha 21-8, 21-6 and also likely clinched a spot in the playoffs. They have one match remaining, against Brazil on Saturday.

In other men's matches, Ondrej Perusic and David Schweiner of the Czech Republic, who forfeited their first match after Perusic tested positive for COVID-19 and went into quarantine, needed a third set to beat Mexico.

In the final matches for the women's Pool A, Melissa Humana-Paredes and Sarah Pavan of Canada beat Switzerland (2-1) in straight sets to finish the round-robin with a 3-0 record. The Dutch (1-2) beat the German team of Karla Borger and Julia Sude (0-3).