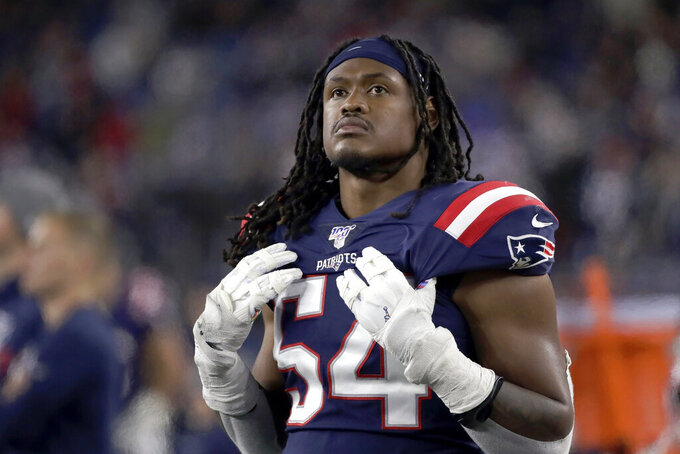 FILE - In this Oct. 10, 2019, file photo, New England Patriots linebacker Dont'a Hightower watches from the sideline during the second half of an NFL football game against the New York Giants in Foxborough, Mass. A person familiar with the situation says Hightower has decided to opt out of the 2020 season. Hightower’s decision was made out of concern for the health of his fiancée and child, who was born earlier this month, the person said. (AP Photo/Elise Amendola, File)

BOSTON (AP) — The Patriots were already going to have a completely different look following an offseason that saw former franchise cornerstone Tom Brady depart to Tampa Bay, as well as several key players on defense cash in elsewhere in free agency.

Now the COVID-19 pandemic has added more complications to New England’s efforts to rebuild its roster heading into the 2020 season.

Linebacker Dont’a Hightower said Tuesday that he is opting out of the 2020 season, highlighting a list of several Patriots who will sit out because of health concerns related to the coronavirus pandemic.

A person familiar with the situation says safety Patrick Chung has also elected not to play. The person spoke to The Associated Press on condition of anonymity because the decision has not been announced.

Both players join tackle Marcus Cannon, running back Brandon Bolden and fullback Danny Vitale, who were listed on the league's official opt-out list Tuesday. ESPN reported that practice squad guard Najee Toran also has decided not to play in 2020.

“This wasn’t an easy decision, or one I made lightly, but I do feel it’s the best decision for my family at this time,” Hightower wrote in a post on Twitter. “I am so grateful for the support of my teammates and coaches, and I will continue to lead and help as much as I can.”

The NFL and the players association agreed last week to an opt-out clause for the upcoming season, with those who choose to voluntarily sit out receiving a $150,000 stipend and those with medical opt outs receiving $350,000 rather than their contractual salary.

Hightower’s decision was made out of concern for the health of his fiancée and child, who was born earlier this month. Cannon is a cancer survivor, having been diagnosed with Non-Hodgkin lymphoma during his final season at Texas Christian University in 2011.

It’s left a team that had been reinvigorated by the signing of veteran quarterback Cam Newton earlier this month with a multitude of questions to answer.

Glimpses of Newton in workout videos posted to his social media accounts seem to reveal a player in great physical condition after being limited to two games in 2019 because of a broken bone in his foot. The prospect of having a dual threat quarterback to build around also could potentially bring a new dimension to the Patriots’ offense.

But to accomplish that, they were counting on having a healthy offensive line in front of him. With Cannon now unavailable and center David Andrews coming back after missing all of 2019 with blood clots in his lungs, that group is showing cracks.

Hightower has been a staple of New England’s defense since being drafted in the first round in 2012, helping the Patriots win three Super Bowls. The two-time Pro Bowler signed a four-year, $35.5 million contract in 2017. He was scheduled to make an $8 million base salary this season.

Chung, who started alongside Devin McCourty, was limited to 13 starts last season because of injuries, but his 51 tackles still ranked fourth among members of the Patriots’ secondary.

Cannon has been a regular on the offensive line since 2016 and missed just one game in 2019. He played 88% of the offensive snaps last season and was scheduled to make $4.7 million this season.

That leaves the Patriots somewhat thin at the tackle spot. Left tackle Isaiah Wynn has missed all but eight games since being selected in the first round of the 2018 draft.

The only other tackles on the roster are 2019 draft pick Yodny Cajuste, 2020 sixth-rounder Justin Herron and veteran Korey Cunningham, who appeared in only one game for New England last season.

Likewise, the Patriots were hoping Vitale, who was signed in March after being cut by the Packers, would help fill the void left following James Develin’s decision to retire in the offseason.

Though NFL veterans can officially begin reporting to training camp Tuesday, the Patriots say their players are not reporting until this upcoming weekend.

The only good news is that it will be weeks before workouts actually begin.

While several teams began testing players as they reported to training camp, New England was awaiting approval of its Infectious Disease Emergency Response plan to help protect its players and staff during the ongoing pandemic.