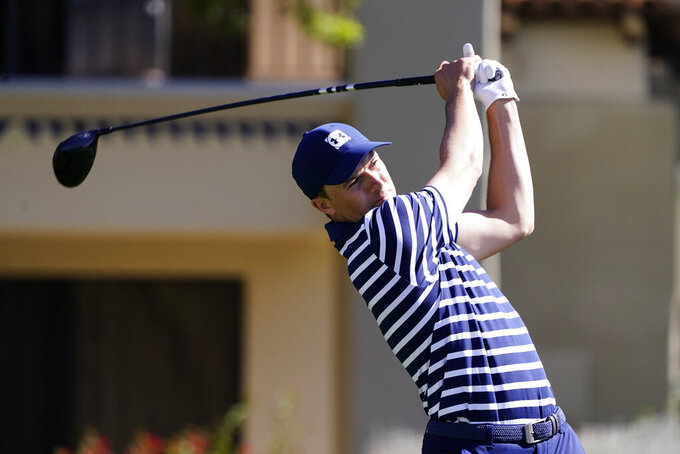 Jordan Spieth tees off on the fifth hole during the final round of a PGA golf tournament on Sunday, Feb. 7, 2021, in Scottsdale, Ariz. (AP Photo/Rick Scuteri)

PEBBLE BEACH, Calif. (AP) — Pebble Beach is one of the few PGA Tour stops where the course is the star of the show regardless of who's playing. And that's about all the AT&T Pebble Beach Pro-Am has going for it this year.

Golf is approaching the one-year anniversary of when the COVID-19 pandemic led to a shutdown and then changed so much about every tournament, at least those that were not postponed or canceled.

Pebble is feeling it this week.

No spectators. No amateurs, who bring their own variety of star power from the world of entertainment, sports and Fortune 100 boardrooms. And not much of a buzz that this tournament provides across three golf courses along 17 Mile Drive and in the cozy restaurants at night in Carmel-by-the-Sea.

“It's a little bit of a letdown,” Patrick Cantlay said. “I hope the (amateurs) are able to come back soon. ... It will be a little less hectic. It does get a little crazy out here with 300 or so competitors playing.”

Cantlay stands out as the highest-ranked player in the field at No. 11. Pebble Beach lost the No. 1 player in the world and a two-time tournament winner when Dustin Johnson decided to withdraw on Tuesday. Johnson is coming off a victory in the Saudi International and decided he would be better off with a week of rest and a busy schedule ahead of him.

That's not terribly unusual. A year ago, only two players from the top 10 were at Pebble Beach — Johnson, who had never missed until this year, and Cantlay, a California native and another Pebble regular. Even so, this is the weakest field at Pebble Beach since the world ranking began in 1986, comparable to domestic PGA Tour events held in the fall.

Johnson has played in Saudi Arabia each of the last two years — a win and a runner-up finish — and still traveled across 11 time zones to play Pebble Beach the following week.

One difference is that it was his one time playing a tournament with his de factor father-in-law, hockey great Wayne Gretzky. They played the last several years with Jordan Spieth and his partner, country singer Jake Owen.

Now it's only for the pros, and they are playing on two courses (Pebble Beach and Spyglass Hill), with the private Monterey Peninsula out of the mix.

Among those missing who were in the field last year are Kevin Na and Viktor Hovland, who were in Saudi Arabia last week; Matt Fitzpatrick and Matt Kuchar; and Kevin Kisner, who was always going to miss because his wife gave birth to their third child last week (a son they named George).

Is it scheduling? That hasn't changed in the last few years? The weather? There is rain in the forecast, but players know to expect anything on the Monterey Peninsula. One year, sunshine gave way to fog and then rain within an hour. Two years ago, the final round was delayed when sleet covered the greens. It was sunny the rest of the day.

“I think maybe weather has a big part to do with it, and then also the upcoming schedule maybe is the biggest issue to do with it,” Cantlay said.

Next week is Riviera, traditionally one of the strongest regular PGA Tour events, followed by a World Golf Championship that has moved this year from Mexico City to Florida. After that is Bay Hill and The Players Championship, all part of a road that leads to the Masters.

“Those are four big tournaments, all in a row, and you just can't play all of them,” Cantlay said.

The test could be different in other aspects. Without amateurs in the field, there is no need to set the pins toward the center of the green to keep it from being overly difficult and slow the pace of play even more. Rounds that approach six hours because of foursomes should be cut by an hour or so.

“It's probably not going to play as easy as it can play when it is the pro-am with certain tees that are up,” defending champion Nick Taylor said. “The par 5s typically play a little shorter, too.”

Taylor outplayed Phil Mickelson, last year's defending champion, to win for the second time in his career. Mickelson, who along with Casey was in Saudi Arabia last week, has missed Pebble Beach only one time and has five victories.

Mickelson still brings plenty of star power even as the 50-year-old has dropped to No. 86 in the world. So does Spieth, who showed signs of life last week in the Phoenix Open when he tied for fourth, his best finish since May 2019.

And it wouldn't be Pebble Beach without a few celebrities. They played in an abbreviated pro-am Wednesday morning, a list that included Bill Murray, rap singer Macklemore and retired 49ers quarterback Steve Young. They also were part of a celebrity challenge to raise money for charity in the afternoon.

And then it was time for them to leave.