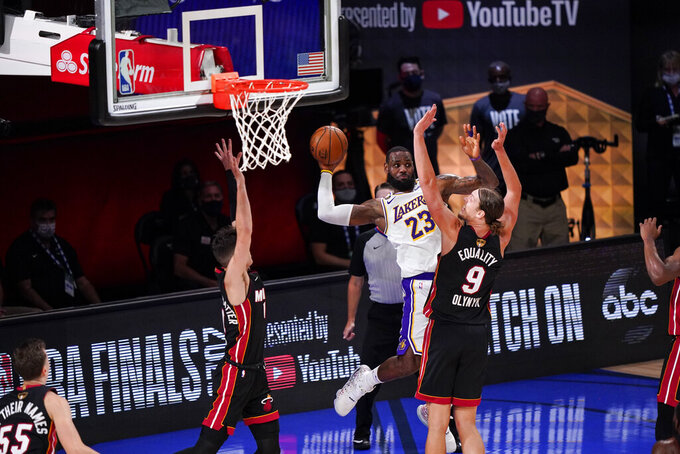 LAKE BUENA VISTA, Fla. (AP) — Jrue Holiday of the New Orleans Pelicans was announced Tuesday as the winner of the Twyman-Stokes Teammate of the Year award.

Holiday announced in July that he would donate about $5 million in salary -- what he earned after the NBA season restarted -- to start a social justice fund with his wife, Lauren, a former soccer player for the U.S. Women’s National Team. The Jrue and Lauren Holiday Social Justice Impact Fund primarily targets “socioeconomics inequalities across communities in New Orleans, the Los Angeles area and Indianapolis.” The money aids Black-owned businesses in those cities and others, as well as helps historically Black colleges and universities.

The award is named for Jack Twyman and Maurice Stokes, both members of the Basketball Hall of Fame who were forever linked by what happened in the final game of the 1957-58 regular season, when Stokes suffered a brain injury.

Stokes was paralyzed, and Twyman supported him for the remainder of his life -- even becoming his legal guardian and advocate.

“It’s an amazing story of brotherhood and being the ultimate teammate,” Miami’s Shane Battier said when he won the award in 2014.

The first three games of these NBA Finals between the Miami Heat and Los Angeles Lakers were all decided by double digits. That’s happened only one other time in the last 15 seasons; the first six games of Cleveland vs. Golden State in 2016 were all double-digit contests, before the Cavaliers won Game 7 by four points.

The first four games of the 2005 finals between San Antonio and Detroit were all decided by at least 15 points, before the next three games were decided by one, nine and seven respectively.

The Lakers' LeBron James’ NBA Finals career started with almost nothing but close games; eight of his first nine and 11 of his first 14 finals contests were single-digit affairs. But entering Tuesday, only 12 of his most recent 38 finals games had been decided by nine points or less.

The Heat, the NBA and State Farm announced a $45,000 donation to the Florida Rights Restoration Coalition’s current Fines and Fees Program. The money will aid the FRCC’s efforts to reinstall the right to vote for returning citizens who face financial obligations stemming from past felony convictions, issues that must be satisfied before those individuals can get their voting rights back.

The donation was part of a charitable effort that also included providing food to 600 families in South Florida who had been impacted by the COVID-19 pandemic. The families received milk, water, proteins, produce and an assortment of non-perishable goods, along with hand sanitizer and Heat gear.

The Heat have been working closely with Feeding South Florida since the pandemic struck to take care of families in need of some assistance.