Pelosi, Schumer to huddle with White House on infrastructure 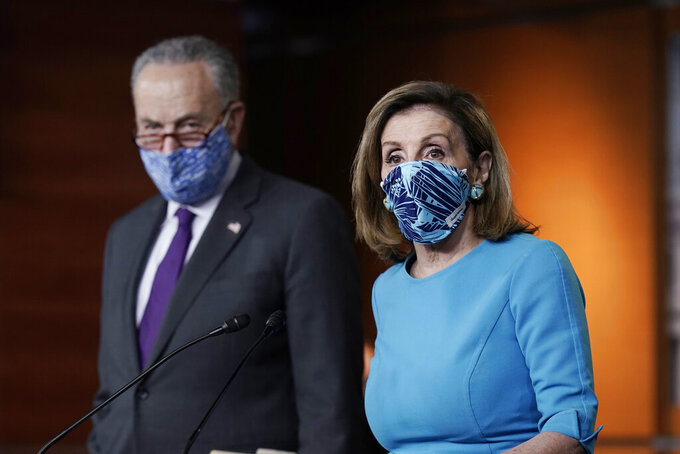 The White House's legislative team huddled in the Capitol basement Tuesday for another round of talks with members from the group of 21 senators, Democrats and Republicans, who are straining to figure out a way to pay for an estimated $1 trillion compromise plan. Biden has rejected their idea for a gas tax linked to inflation, but Republicans are refusing to consider his idea of raising the corporate tax rate. Frustrations are mounting as time ticks with issues still unresolved.

Biden is redoubling his engagement this week as anxious Democrats urge the White House to move faster and leave the talks with Republicans behind so they can pursue his ambitious American Jobs and American Families plans on their own. The congressional leaders are preparing for a consequential but slogging summer schedule with no room for error with their slim majorities in the House and Senate as they try to appease centrist lawmakers who want a potentially more modest but bipartisan accord and liberals who want Biden to go big and seize the moment to deliver on his big campaign promises.

“We need to get to this issue sooner rather than later,” House Majority Leader Steny Hoyer, D-Md., told reporters on a conference call.

For weeks, the bipartisan group that now makes up one-fifth of the Senate has been chasing numbers and policies behind closed doors, having largely agreed to a package of infrastructure priorities but still arguing over how to pay for it.

Theirs is a more traditional package of roads, bridges, highways and broadband investments, with a small amount devoted to the green energy priorities of electric vehicle charging stations and building resiliency championed by Biden. It totals $579 billion in new spending and about $1 overall — far from Biden's $1.7 trillion jobs plan.

“They’re still plugging away at it, and I think, as has been the problem for a long time, it kind of comes down to how we pay for it,” Sen. John Thune, R-S.D., the GOP whip, told reporters at the Capitol.

Thune said it was his understanding the White House was not interested in a proposed public-private investment fund as a way to raise money for the building projects and developments, though other Republican senators cautioned that idea may still be in the mix.

The bipartisan group has proposed various other funding sources, including tapping more than $100 billion in unspent COVID-19 relief funds, but that received a cool reception from the White House and Democrats who say the virus aid money is still needed. Another idea, to raise $63 billion from Internal Revenue Service enforcement of tax cheats, is something some Republicans oppose.

As the bipartisan talks drag on, Democrats are preparing to go it alone, readying a massive $6 trillion package that goes far beyond traditional infrastructure and includes longtime priorities, including expanding Medicare to include dental, vision and hearing aid benefits, developing child care centers, elder care and hospitals and extending tax breaks and other benefits for families that were introduced during the coronavirus crisis.

Initial votes on those proposals could start in July, launching the budget reconciliation process, which allows majority passage, without the need for Democrats in the split 50-50 Senate to rely on Republicans to reach the 60-vote threshold needed to overcome opposition from a filibuster.