Pennsylvania Republicans eye referendums to get past vetoes 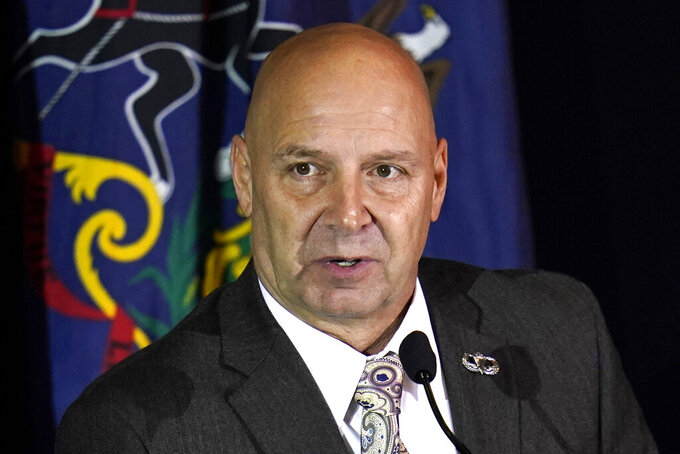 HARRISBURG, Pa. (AP) — Republicans who control Pennsylvania's Legislature are increasingly looking to take a different avenue to write laws, voter referendums, to get around Gov. Tom Wolf and make policy that the Democrat cannot block with his veto pen.

On Friday, Republicans unveiled a proposed constitutional amendment to expand Pennsylvania's existing voter identification requirements, both for in-person voting and for mail-in ballots. Republicans also plan to introduce another proposal for a statewide referendum to repeal Pennsylvania's expansive mail-in voting law that passed in 2019 with near-unanimous support from Republicans.

Both have been introduced also as legislation, and Wolf has vowed to oppose both, seeing them as attacks on voting access spurred by former President Donald Trump's baseless claims about election fraud.

“So the governor’s going to veto that,” one of the sponsors, state Sen. Doug Mastriano, R-Franklin, told the audience Friday at the annual conservative gathering, the Pennsylvania Leadership Conference. ”Aha! But the lesson from last year was we’ll then do a ballot question and I think any issue of how our election is conducted in Pennsylvania should be your decision in the end.”

The lesson, it seems, was in last month's primary election, when voters approved two Republican-penned proposals to greatly expand the power of lawmakers over a governor's disaster emergency declarations.

A governor cannot block a ballot question to change the constitution from going to voters.

Democrats see Republicans as being emboldened by last month’s voter approvals, and increasingly willing to use the strategy in the future to get around a Wolf veto.

Last month’s ballot questions emerged from a long-running fight between Republicans and Wolf over his administration’s use of executive authority during the coronavirus pandemic.

One of last month's proposals to amend the constitution was actually designed to change a provision in the law.

The only other such example Ledewitz could recall was in his reading about the 1874 constitutional convention when delegates inserted provisions regulating corporations into the constitution.

Those provisions belonged in the law, not the constitution, but delegates did not trust the Legislature to regulate corporations, Ledewitz said.

“At least that was rational,” Ledewitz said. “They're only doing this because the governor has a veto. ... You could put anything in the constitution, but you don’t because if you do, you’re going to have to amend it all the time once you start down that road.”

Rep. Jeff Wheeland, R-Lycoming, downplayed the importance of Wolf's veto threat in his sponsorship of the voter ID amendment to the constitution.

“I’m just listening to the people,” Wheeland said. "That’s what the people want.”

The nearest opportunity for Republicans to get the election-related proposals on the ballot is 2023. Before that, the proposals must pass the Legislature twice in two consecutive legislative sessions.

History is on Republicans’ side in a strategy of going to voters: The last time voters rejected a ballot question was in 1993, and they usually pass easily.

“They clearly had a deliberate strategy around the disaster declarations and I think they're teeing these things up to be ready go to on the ballot in 2023,” Abbott said. "And I think there is this concern more broadly that it’s difficult to get people away from voting yes.”