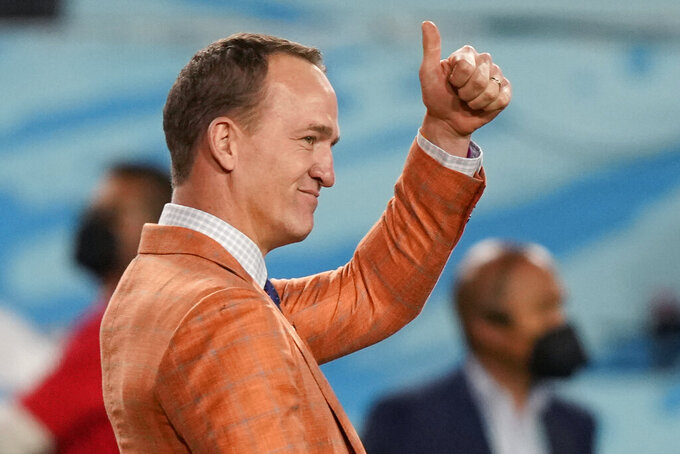 FILE - Former quarterback Peyton Manning motions to the crowd during the NFL Super Bowl 55 football game between the Tampa Bay Buccaneers and the Kansas City Chiefs in Tampa, Fla., in this Sunday, Feb. 7, 2021, file photo. Peyton Manning was unanimously elected to the Broncos Ring of Fame on Wednesday, June 9, 2021. Manning will be honored during the Broncos’ game against Washington at Empower Field at Mile High on Halloween. (AP Photo/David J. Phillip, File)

ENGLEWOOD, Colo. (AP) — Peyton Manning was elected to the Broncos Ring of Fame on Wednesday in recognition of his record-breaking four-year run in Denver that culminated with a victory in Super Bowl 50.

Manning will be honored during a game against Washington at Empower Field at Mile High on Halloween, less than three months after his induction into the Pro Football Hall of Fame on Aug. 8.

“From Floyd Little to Karl Mecklenburg to Steve Atwater to many others, I’ve always looked up at the names around the stadium and admired the great players the Broncos have had over the years," Manning said in a statement. “I’m very humbled to now join them as a Ring of Famer.”

The six-member selection committee unanimously selected Manning as the 35th member of the team’s Ring of Fame. Last year’s honoree, former coach Mike Shanahan, also will be honored this season after the pandemic prevented his ceremony in 2020.

Manning joins Champ Bailey (2019) as the only Broncos selected to the team’s Ring of Fame and the Pro Football Hall of Fame in the same season.

Manning's four seasons in Denver from 2012-15 “were marked by record-setting individual success and exceptional leadership that helped the Broncos to multiple Super Bowls and one of the winningest periods in team history,” team CEO and President Joe Ellis said.

Manning joined the Broncos as a free agent on March 20, 2012, after his release from the Colts following a 14-year run in Indianapolis that included a win in Super Bowl 41.

At the time, his future in football was cloudy because he was coming off multiple neck fusion surgeries that left him with numbness in his throwing hand and he had missed the entire 2011 season.

He replaced Tim Tebow and took over a Broncos team that had gone 8-8 the year before his arrival and led them to two Super Bowls and one championship over the next four seasons.

“He just kind of created this sense of energy for everybody — not just the offense or the defense but even the janitors and coaches,” said linebacker Von Miller, the Super Bowl 50 MVP. “The coaches started coaching different, the janitors, the cooks, they all had this sort of spark, and it was the Peyton Manning Effect."

A month after Denver's 24-10 win over the Panthers in Super Bowl 50, Manning retired a champion just as his boss, John Elway, had done following his second straight Super Bowl title in 1999.

“When Peyton arrived in 2012, his impact and standard was felt throughout our team, the entire organization and in the community," Ellis said. “Coming back from a serious injury — with a new team in a new city — to not only win MVP but to have one of the greatest single seasons ever by any player was a remarkable feat.”

Manning was inducted into the Colts’ Ring of Honor in 2017, the same year he was a College Football Hall of Fame inductee for his success at Tennessee before Indianapolis made him the top overall draft pick in 1998.

Kicker Brandon McManus, the only active Bronco other than Miller who played with Manning, called the five-time MVP "an incredible competitor, probably more than athlete. I don't think he was the greatest athlete per se. But he was the best competitor in the world, and he knew how to win.”

Manning, who still lives in Denver, said the city and the Broncos were everything he'd hoped for when he arrived in 2012 and “once I got my confidence we went on a heckuva run and never looked back.”

He credited his “many great teammates and coaches” and singled out Demaryius Thomas, Eric Decker, Wes Welker and Emmanuel Sanders on offense along with defensive stars Miller, Aqib Talib and DeMarcus Ware.

“It ended up being a great decision to come here not only to play for the Broncos but to be part of this special community,” Manning said. "Denver is a destination city. Our family is proud to call Denver our home and live in this community even after football. I’m very appreciative and grateful for my time with the Broncos. It’s a tremendous honor to be named to the Denver Broncos Ring of Fame.”