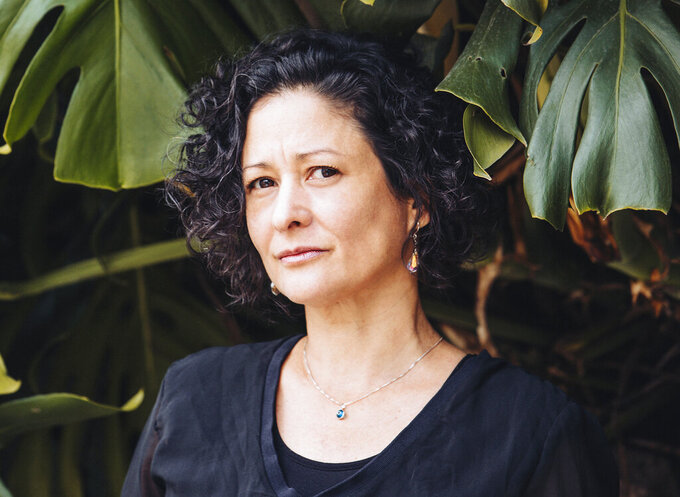 NEW YORK (AP) — It took Pilar Quintana four years and a few drafts to write “The Abysses” (“Los Abismos”,) winner of the 2021 Alfaguara Novel Prize. Quitana’s worries regarding maternity, and her “irrational” childhood terror of becoming an orphan, inspired the Colombian author to write this story about a young girl who reflects on her parents' troubled marriage with extraordinary perception and sensitivity.

“Maternity helps you reconnect with the child that you were and to understand him and relive that phase of your life that we tend to forget as adults,” says Quintana, who has a 5-year-old son.

The author, 49, whose previous novel “The Bitch” (“La Perra”) was shortlisted for the 2020 National Book Award in Translated Literature, was announced last month as the winner of the Alfaguara, a prestigious prize for Spanish literature that awards $175,000 (about 145,000 euros,) a sculpture by Spanish artist Martín Chirino and the simultaneous publication of the winning novel across the Spanish-speaking world.

Under the pen name of “Claudia from Colombia,” she competed with 2,428 other manuscripts, a record of submissions according to the organizers. Claudia is the name of her story’s young hero.

The jury, presided over by Colombian novelist Héctor Abad Faciolince, highlighted Quintana’s work as a “powerful story narrated from an apparent ingenuity that contrasts with the unfortunate atmosphere that surrounds the protagonist.”

“The Abysses” will be published in Spanish on March 25. A date for an English translation is yet to be announced.

In a recent interview with The Associated Press from her native city of Cali, the author of five novels and a collection of stories spoke about winning the prestigious award, her creative process, and her international success in the complicated times of the pandemic. Answers have been edited for brevity and clarity.

AP: The day you were announced as the Alfaguara Prize winner you said you were “a little speechless.” Have you had time to assimilate it?

QUINTANA: I am no longer asking myself, but sort of stating the affirmation: “This is happening.” I think the news is just starting to sink in.

AP: You also said that it was the dream of a lifetime that will allow you not only to reach new audiences but also to have more time to write. Aren’t you a full-time writer?

QUINTANA: I am, but you hardly know an author who can live from his books. We always have to give some writing workshop, some class, to write magazine articles — anything that allows us to work and leaves us time to write. This prize has the financial recognition that allows an author to say: “Ok, I’m stopping.” It’s like they’re paying you to write without the concerns of having to produce to fill the fridge and pay for your son’s school. Many of us authors hardly get to live off our books.

AP: “The Abysses” is the story of a girl whose parents live in conflict. What inspired you to write about this?

QUINTANA: Once I was a mother, I could understand things from my mom that I didn’t understand, and I think this novel is that. I remember fighting with my mom as a rebellious teenager, and her telling me: “You don’t understand because you haven’t had children! When you have them, you will see!” And yes, part of that is there. Although the novel also emerges from my connection with a childhood fear: The fear of losing our parents. It’s an irrational fear. It’s the terror of becoming an orphan. So is that, connected to my own experiences but reinvented in a fiction piece.

AP: How did you find Claudia’s voice?

QUINTANA: Well, I think that was one of the biggest challenges. I felt that the girl herself could not be the narrator because children are very smart and they perceive everything that’s going on around them with great wit, but they don’t have the language sufficiently established and developed to be able to process all that with words. I decided to use instead an adult (female) narrator who would be capable of getting down to the level of the girl, to show the world through the girl’s eyes, in the girl’s words.

AP: Did you borrow from your own childhood for this story?

QUINTANA: I believe I did. Something very cool about maternity ... is reliving your own childhood. How when your child is growing and asks certain questions or says certain things or has certain fears, it reminds us that we also made those questions, those affirmations, we understood the world that way.

AP: How was the creative process for “The Abysses”? Was this one of those books that wrote itself, or did it involve much time and effort?

QUINTANA: It took me four years to find this novel. I had written a few drafts and I think by January of 2020 I had one that I said: “This is it.” I had found the foundations, but I still had to give it the finishing touches, to paint it, to decorate it. In January I dedicated myself to work on that, but then in March the pandemic arrived and it was very challenging to work with my son home all the time, because my time to work was when he was in school. It took me a little longer than I expected, but I got to finish that last draft that I felt was the final one.

AP: How did you decide to submit it to the Alfaguara Novel Prize?

QUINTANA: I spoke to my agent and she said “Yes, let’s send it.” But this is such a big award that receives so many great novels from such big authors... I almost saw it as buying a lottery ticket, when you say: “Well, I don’t think I’m going to win it, but I’ll buy it anyway.”

AP: This award arrives in the middle of a pandemic and while your previous novel is being translated in 14 countries. What do these achievements mean to you in a year that’s been so complicated otherwise?

QUINTANA: It has been a very complicated year. Many people are going through such hard situations. It has been complicated for everybody, including me. But I have to say that I feel very privileged because, within the pandemic, I’ve had the relief to see my work yielding results, and that’s a very big relief.