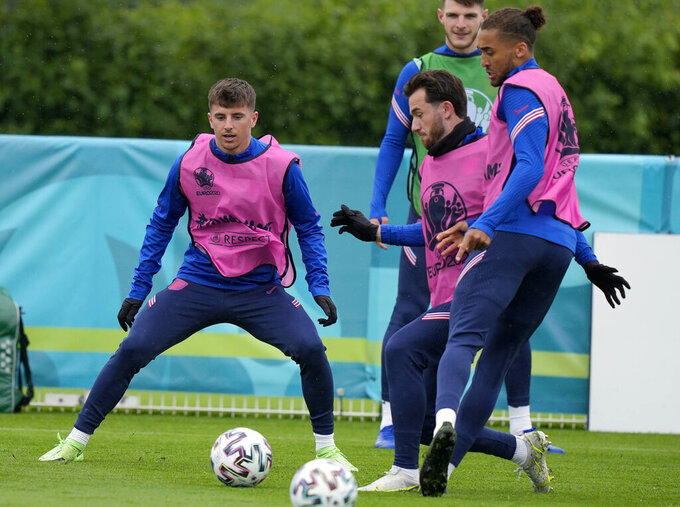 England's Mason Mount, left, and England's Ben Chilwell, second left, during a team training session at Tottenham Hotspur training ground in London, Monday, June 21, 2021 one day ahead of the Euro 2020 soccer championship group D match against Czech Republic. After a positive test for Scotland midfielder Billy Gilmour, Mason Mount and Ben Chilwell have been told to self isolate following "interaction" with Gilmour during England's 0-0 draw with Scotland at Wembley Stadium on Friday. (AP Photo/Frank Augstein) 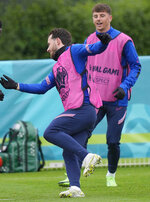 GLASGOW, Scotland (AP) — A coronavirus infection created disruption for two teams at the European Championship on Monday after a positive test for Scotland midfielder Billy Gilmour also led to two England players having to self-isolate.

Midfielder Mason Mount and left back Ben Chilwell were deemed by English health authorities to have had “interaction" with Gilmour during England's 0-0 draw with Scotland at Wembley Stadium on Friday. The three players are teammates at Chelsea.

The announcement came ahead of the final Group D games, with England hosting the Czech Republic, and Scotland playing Croatia with qualification for the round of 16 still up for grabs.

All England players came back with negative PCR tests on Sunday and lateral flow tests on Monday. While Mount started for England against Scotland, Chilwell was an unused substitute.

No timeframe was stated for the period of isolation, which was described as a “precaution" as England team officials remain in talks with local health authorities.

“I can’t say it isn’t disruptive," England coach Gareth Southgate said. “We don’t really know at this point whether they might be OK for tomorrow, or they could be out for 10 days. So there are a lot of unknowns.”

Mount and Chilwell were part of England training on Monday morning after the announcement of Gilmour’s positive test.

Gilmour has already been ruled out of Scotland's game on Tuesday after entering isolation for 10 days.

“He’s upset as you would expect,” Scotland coach Steve Clarke said. “He’s asymptomatic. Hopefully he’ll get back to playing as quickly as possible. It’s a blow for us. But it’s a chance for someone else to come into the team.”

Gilmour was UEFA's player of the match on Friday in the 0-0 draw.

Players are regularly tested and are staying within team bubbles except when they are at matches. The Scottish Football Association said it had been liaising with Public Health England, but did not announce if anyone else had been deemed a close contact and would have to also isolate.

Clarke refused to answer questions about how the bubble was breached or how Gilmour may have come into contact with the virus.

“That's not my department. That's for the medical department,” Clarke said. “I'm just focusing on preparing the team for tomorrow's match.”

It was the second time in less than a month that the coronavirus has hit the Scotland team. Midfielder John Fleck tested positive on June 1, and six other players were told to self-isolate and were unavailable for a friendly against the Netherlands.

Croatia and the Czech Republic were initially scheduled to use training bases in Scotland but they canceled those plans on May 31, citing UEFA concerns about local COVID-19 rules. The fear was that if one player tested positive, other players and staff members would also have to self-isolate.

Croatia coach Zlatko Dalić reacted to the news of Gilmour's self-isolation with a measure of irritation, saying the rules weren't the same for all.

Scotland’s training base is in Middlesbrough, England, so the rules that Dalić is complaining about don’t apply.

Dalić said he would have preferred to set up camp in Scotland, since the team is traveling back and forth to Croatia.

“We’ve made an exception and we stayed in Croatia,” Dalić said. “And we’re traveling every three days. Those are not good conditions.”

The coach said he doesn't expect that any of his players will be afraid of catching the coronavirus and request not to play in Tuesday's match.

“We just arrived in Glasgow," Dalić said. "We went to have lunch. We will have a meeting. I don’t expect anybody to request that.”

Scotland and Croatia both have one point from their two Group D matches.