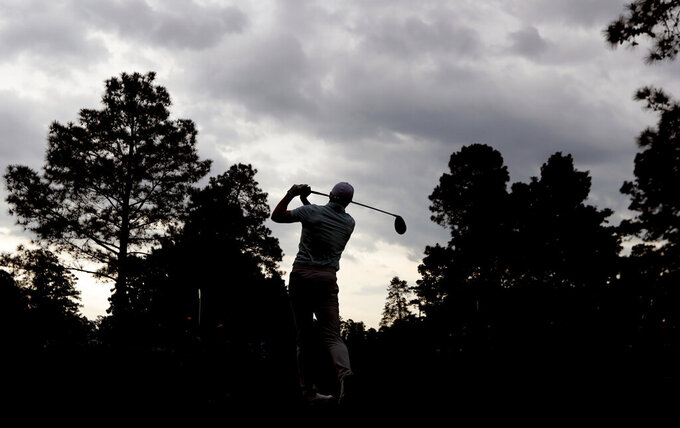 Storm clouds pass over as play resumes and Jordan Spieth tees off on the ninth hole during the third round of the Masters at Augusta National Golf Club on Saturday, April 10, 2021, in Augusta, Ga. (Curtis Compton/Atlanta Journal-Constitution via AP)

Notes: The field features Dustin Johnson, Collin Morikawa and Patrick Cantlay. They are among 42 players who were in the Masters last week. ... The last player to win the week after becoming Masters champion was Bernhard Langer in 1985. ... Webb Simpson won last year on Father's Day. The RBC Heritage was the second event when the PGA Tour returned from the coronavirus pandemic-caused shutdown. ... One of the sponsor exemptions went to Nick Watney, the first player to test positive for COVID-19 at a PGA Tour event. ... Robert MacIntyre of Scotland, who tied for 12th in his Masters debut, is among non-PGA Tour members who are staying over after the Masters. MacIntyre led the Masters field with 21 birdies last week. ... Bryson DeChambeau was scheduled to play and withdrew on Monday. ... Will Zalatoris was the only player to break par all four rounds at the Masters. He is in the RBC Heritage. But unless he wins a tournament, he will not be in the PGA Tour postseason as a special temporary member.

Notes: The field features nine of the top 10 in the world, missing only Jin Young Ko at No. 1. ... Patty Tavatanakit, who won her first LPGA event at the first major of the year, is not playing. ... The tournament has moved this year from Ko Olina to Kapolei, which previously hosted the Ladies Hawaiian Open from 1996 to 2001. It most recently hosted the Pacific Links Championship on the PGA Tour Champions until 2014. ... The tournament was canceled last year because of the pandemic. No spectators will be allowed. ... Brooke Henderson will be going for her third straight title in the LPGA's only stop in Hawaii. ... Michelle Wie, who missed the cut in the Kia Classic and ANA Inspiration, is not playing her hometown event. Wie won the tournament in 2014 when it was at Ko Olina. ... The tournament starts Wednesday and ends Saturday. ... The tournament has been decided by at least three shots the last three times. ... This is the start of four straight tournaments on the LPGA Tour, the final two in Asia.

Notes: The tournament was held last year in February. ... The PGA Tour Champions is back in action after a break of six weeks except for those who played on the regular tour or in the Masters. ... Seven players in the field played in the Masters last week. That includes Jose Maria Olazabal, who made the cut. ... Tom Lehman as a spectator and Scott Verplank and Jeff Sluman doing CBS work also were at Augusta National last week. They are in the field. ... Steve Stricker, who has a winter home in Naples, is playing on the PGA Tour this week. ... The Charles Schwab Cup points list is over the 2020 and 2021 seasons because of the pandemic. Kevin Sutherland finally took over the lead from Bernhard Langer with his win at the Cologuard Classic. ... This is the third event at Tiburon in the last five months. It also hosted the CME Group Tour Championship on the LPGA and the unofficial QBE Shootout.

Next tournament: Insperity Invitational on April 30-May 2.

Notes: This takes the place of the Portugal Masters, which is not being played because of the pandemic. The Portugal Masters was to be in two weeks. The Tenerife Open, originally scheduled for this week, will be played in that spot. ... Two-time major champion Martin Kaymer is in the field. ... Bernd Wiesberger is not playing his national open. He played last week in the Masters. ... The tournament dates to 1990, with Bernhard Langer winning the inaugural edition. ... The Austrian Open was the first European Tour event when the tour came back from the pandemic-caused shutdown last year. It was a joint European Tour and Challenge Tour event.