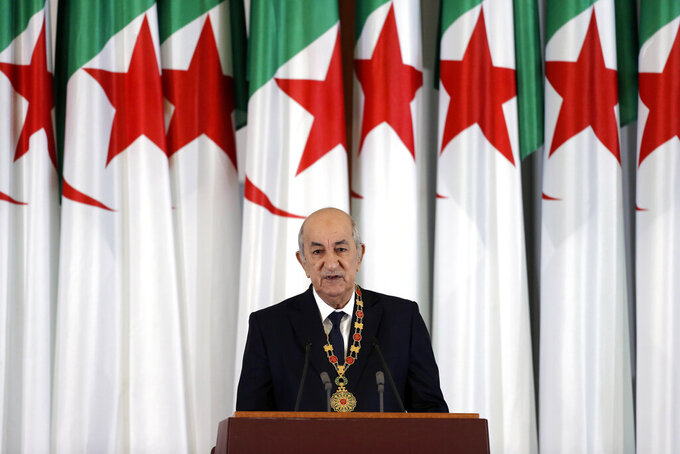 FILE - In this Thursday, Dec. 19, 2019 file photo, Algerian president Abdelmadjid Tebboune delivers a speech during an inauguration ceremony in the presidential palace, in Algiers, Algeria. Still recovering from COVID-19, Algeria's president suddenly reappeared Sunday Dec. 13, 2020, after nearly two months out of the public eye, saying in a video message that it may still be several more weeks before he is fit enough to return to his North African country. (AP Photo/Toufik Doudou, File)

ALGIERS, Algeria (AP) — Algerian President Abdelmadjid Tebboune said Tuesday that he was back in his country but still recovering from COVID-19 after two months away.

“I passed through difficult moments. I am happy to be back, thanks God," Tebboune said in a video broadcast on national public television..” Speaking clearly, he said he needs “a few days” to finish recovering.

Tebboune fell ill and left for treatment in Germany in late October.

After nearly two months out of the public eye, the 75-year-old president reappeared in mid-December in a video message, saying it might be several weeks before he was fit enough to return to Algeria.

“Being far away from the country is difficult,” he said in the video aired Tuesday. He wished Algeria's people a 2021 “full of happiness.”

The long absence of the head of state, who also serves the North African nation's defense chief, recalled the lengthy periods during which his predecessor did not appear in public. After suffering a stroke in 2013, former President Abdelaziz Bouteflika sought treatment in France and later went to Switzerland for numerous medical check-ups, There was lots of speculation and little official information about his whereabouts or condition.

Bouteflika kept ruling even as his public appearances kept dwindling. He was forced to abandon his bid for a fifth term last year before being pushed from office under pressure from protesters and the powerful army.

Prime Minister Abdelaziz Djerad has been in charge during Tebboune’s absence as the country struggles with an economy worsened by the coronavirus pandemic and other issues.