Prosecutor wants to try juvenile as adult in athlete's death 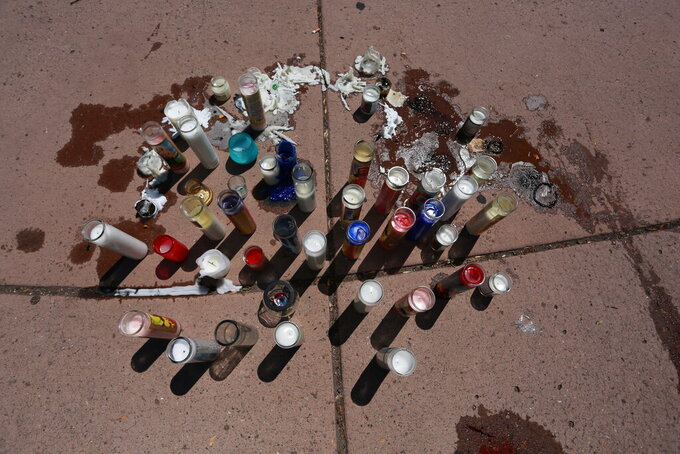 Candles melt in the sun at an impromptu memorial for Fedonta "J.B." White on Monday, Aug. 3, 2020, in Santa Fe, N.M. White, an 18-year-old college basketball recruit, was shot early Saturday at a social gathering on the northern outskirts of Santa Fe. (AP Photo/Cedar Attanasio)

Serna said the district attorney's office filed a petition in juvenile court that includes an open count of murder against a juvenile defendant, and that his office will request to move the case to state district court to pursue adult sanctions in the shooting death Saturday of Fedonta “J.B.” White.

White, an 18-year-old college basketball recruit who planned to graduate from high school early over the summer, was shot at a social gathering on the northern outskirts of Santa Fe in the rural community known as Chupadero.

A 16-year-old linked to the killing was being held at a juvenile detention center. The Associated Press generally does not identify juveniles who are accused of crimes.

White, a 6-foot-8 forward for the Santa Fe High School Demons averaged 20 points and 10 rebounds in the 2019-20 season, as his team reached the state quarterfinals. He was scheduled to graduate early and play basketball on a scholarship for the University of New Mexico.

Hundreds of friends and acquaintances gathered Sunday on Santa Fe's downtown plaza for a vigil, lighting candles at a makeshift memorial. Others stayed away as a precaution against any potential violence.

Serna said an initial detention hearing will take place in juvenile court before prosecutors can file a request to apply adult sanctions in state district court.

He declined to share copies of the petition, citing juvenile court restrictions.

In a news release Sunday, the Santa Fe County Sheriff's Department announced preliminary homicide and weapons charges against a 16-year-old defendant. The department on Monday declined to immediately release further documents related to its charges and investigation.

Administrators and students from White's school district made a public appeal Monday for parents to safeguard firearms and for youths to take a pledge toward stemming gun violence. School officials outlined free counseling options for youths who may be despondent or depressed over the shooting and White's death.

“I say to our parents, be mindful of house parties — let’s not forget that there’s a current pandemic,” she said. "Be cognizant of students' access to guns, talk to your children.”

Miranda Viscoli, of the gun control advocacy group New Mexicans to Prevent Gun Violence, called on state lawmakers to revisit stalled proposals for a child access protection law that allows adults to be prosecuted if a minor gains access to a neglectfully stored firearm.