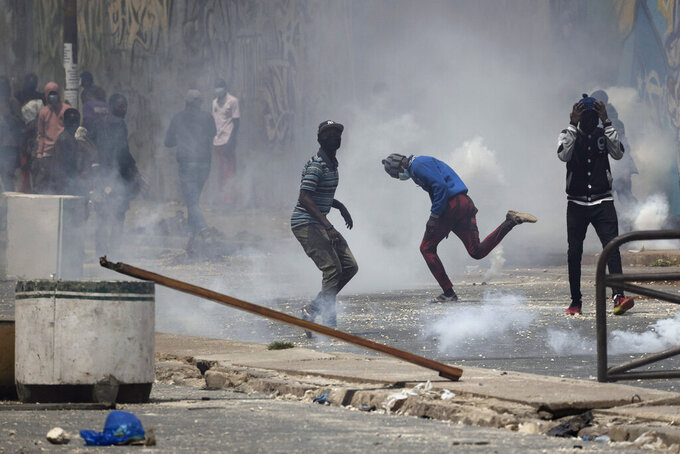 A demonstrators runs amid tear gas smoke during protests against the arrest of opposition leader and former presidential candidate Ousmane Sonko in Dakar, Senegal, Friday, March 5, 2021. Days of violent protests in Senegal have killed at least one person, local reports say, as young people take to the streets nationwide in support of the main opposition leader who was detained Wednesday. (AP Photo/Leo Correa)

DAKAR, Senegal (AP) — Police fired tear gas in Senegal’s capital to disperse protesting supporters of the country’s main opposition leader, who appeared in court for the first time on Friday since his detention two days ago sparked days of violent demonstrations in which at least four died.

This week’s unrest in Dakar has been the worst seen in years in a country known for its stability. Thousands have also protested nationwide.

Police moved in to disperse crowds throwing objects at security forces and setting tires, pieces of wood and other objects on fire near the tribunal where opposition leader Ousmane Sonko appeared.

Plumes of black smoke rose into the sky as armored vehicles roamed the streets, which cleared briefly for Friday afternoon prayers. Demonstrators reappeared after prayers to be confronted by authorities lobbing tear gas cannisters.

Senegal’s Interior Minister Antoine Felix Diom announced the death of a fourth protester on Friday in the capital following clashes between young people and the defense and security forces. He spoke out against the looting, and said the government would ease curfews imposed because of the coronavirus pandemic as the vaccination campaign continues.

The demonstrations began Wednesday before Sonko’s court appearance for questioning on accusations of rape. He was detained on the way to the courthouse and arrested for disturbing public order after hundreds of his supporters clashed with police who were blocking unauthorized protests.

His lawyer Friday said he is now charged with rape and making death threats. They said the judge has also initiated further proceedings to prosecute him for calling for an insurgency. He will appear again in court on Monday.

Protests have intensified since Sonko’s arrest. Several stores belonging to a major grocery chain, Auchan, have been looted and burned. Total gas stations were also targeted in what appeared to be attacks on businesses with French interests. Demonstrators also attacked Rfm and government newspaper Le Soleil.

The government has condemned the violence and said “the instigators, perpetrators and accomplices” will be prosecuted. Authorities suspended two private television stations for 72 hours, accusing Sen TV and Walf TV of inciting public disorder for showing content that “explicitly or implicitly defended violence.”

NetBlocks, which monitors the internet, said that messaging and social media apps including WhatsApp, Facebook and Youtube were being restricted Friday.

The 46-year-old Sonko, who placed third in the 2019 election, was accused of rape last month by a beauty salon employee. He was summoned for questioning after his parliamentary immunity was lifted last week.

Sonko has been a strong opponent of President Macky Sall since 2012 and is popular with the country’s youth. Sonko and his supporters have said the charges are politically motivated, and they accuse Sall of conspiring to undermine Sonko before the 2024 election.

Amnesty International condemned what it called arbitrary arrests of opponents and activists, and called on authorities to “respect the freedom of peaceful assembly.” It accused authorities of stopping Sonko’s convoy and firing tear gas to disperse his supporters.

The rights group also called for public disturbance and unauthorized demonstration charges against Sonko to be dropped and for him to be released from custody if these were the only charges justifying his detention.

The Special Representative for the Secretary-General and Head of the United Nations Office for West Africa and the Sahel, Mohamed Ibn Chambas, said he “deplores the acts of violence” and called for restraint. He urged authorities to ensure protesters’ rights to demonstrate peacefully as well as their safety.