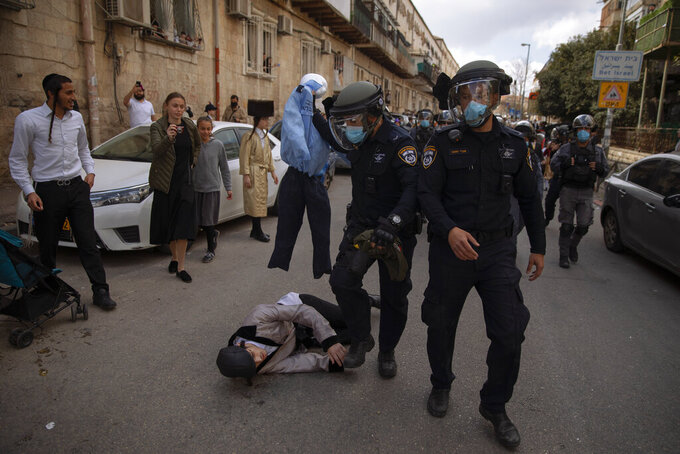 Ultra-Orthodox Jews some wearing costumes scuffle with police officers during celebrations of the Jewish holiday of Purim, in the Mea Shearim ultra-Orthodox neighborhood of Jerusalem, Sunday, Feb. 28, 2021. The Jewish holiday of Purim commemorates the Jews' salvation from genocide in ancient Persia, as recounted in the biblical Book of Esther. (AP Photo/Oded Balilty)

JERUSALEM (AP) — Mass gatherings took place in Jerusalem on Sunday as Israelis celebrated the Jewish holiday of Purim in violation of coronavirus restrictions.

Authorities had been concerned about a repeat of last year, when Purim celebrations helped fuel an initial wave of the coronavirus in the earliest days of the global pandemic. The government urged people to celebrate at home this year, and police attempted to block traffic from entering Jerusalem and declared strict limits on public gatherings.

But the restrictions were not able to prevent street parties as well as mass prayer celebrations in ultra-Orthodox areas, which have repeatedly flouted safety rules. With traffic clogged at the entrance of Jerusalem, Israeli TV stations showed videos of ultra-Orthodox families walking along the side of the highway into the city.

Purim marks the victory of Jews over a tyrant in ancient Persia and is celebrated with costumes, drinking and parties.

The holiday was celebrated nationwide over the weekend, with Jerusalem celebrating a day later than the rest of the country. Similar safety violations took place in both secular and religious areas of the country.

The celebrations have threatened to undercut Israel’s successful vaccination campaign. The country has vaccinated most of its adult population, but younger Israelis in their teens, 20s and 30s have been slow to get inoculated.