A quiet start to empty week at Augusta National for Masters 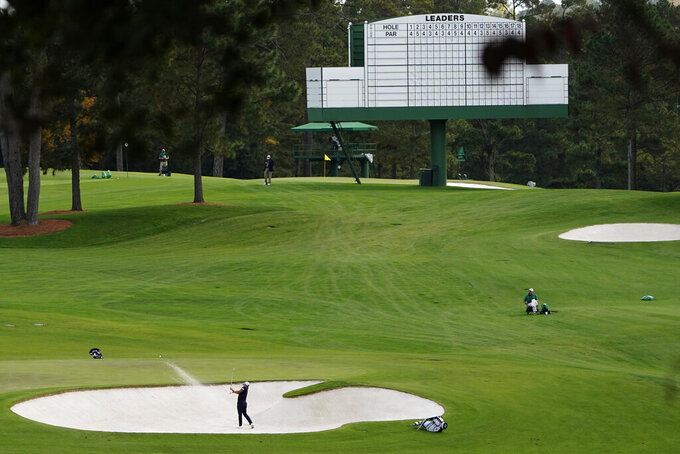 Is Woo Kim, of South Korea, hits out of a bunker on the second hole during a practice round for the Masters golf tournament Monday, Nov. 9, 2020, in Augusta, Ga. (AP Photo/Matt Slocum)

AUGUSTA, Ga. (AP) — Take away a few white scoreboards in their usual places behind the greens, and the green television stands behind the 12th tee and a few other strategic locations, and this is what Augusta National looks like in November.

It looks bigger because hardly anyone is there.

The grandstands are gone. The ropes are missing, replaced by painted lines — dark green, of course — around the tee boxes and greens and marking spots along the fairway to show the few people allowed at the Masters where they can stand.

Instead of Augusta National members and their guests, the course was filled Monday with Tiger Woods and Justin Thomas, Bubba Watson and Jordan Spieth, all of them playing a practice round on a course that only looked the same.

“We're used to coming here on Monday already and seeing lots of people,” Francesco Molinari said. “So it looks different already. I don't know. We'll have to see how everyone adapts to the differing conditions. It's hard not to have the fans around, but it's amazing to have the opportunity to be back here for us as players.”

It was a lost opportunity for Sergio Garcia and Joaquin Niemann, both of whom tested positive for the coronavirus and had to withdraw, another reminder why the Masters moved to November date in the first place.

The COVID-19 pandemic that shut down golf for three months forced a reconfigured major championship schedule unlike any other, particularly at the Masters. The annual rite of spring is now a strange passage into autumn.

The 1,600 azalea bushes on the 13th hole have no blooms. Neither do the pink dogwoods down the right side of the second fairway. It's not without color, of course. The Firethorn berries on the 15th were bursting with color, as they are prone to do in late summer and early fall.

Under those towering Georgia pines is a mixture of pine straw and fallen leaves.

Mostly, however, it's the lack of patrons that makes it look — and sound — so different.

“There's no doubt the missing gallery is going to be the biggest difference,” Adam Scott said. "The things that will be the same is it still means the same to us all, and maybe even more so because we return to Augusta National every year. Everything that the club does to make this a special event for everybody who gets to watch it — whether that's on TV, the patrons who comes to the grounds or the players — it's an incredible experience.

“So we'll be missing one element. But it's a huge element to the experience of playing the Masters.”

Late in the afternoon, three women were strolling along toward the edge of Amen Corner with a drink called “Azalea” and not a care in the world. Their husbands were in the field, but they weren't sure if they were playing at the moment. It was a nice day. It was easy to get around. It was peaceful.

This is the Augusta National hardly anyone gets to see.

And it won't change much over the next six days, except for the forecast. Rain was expected at least for the next two practice rounds, and possibly throughout the week.

The course already is softer than it usually is in April because the rye grass planted over the dead Bermuda has only had a month or so to take root. It's still pristine, and it will look that way on TV. Even so, the weather has been so warm that splotches of Bermuda grass are evident on the slopes and collection areas off the greens.

That will have a small effect on chipping.

“I'm anxious to see over the next couple of days how tight some of the run-off areas get because the grass has been a little thicker and longer than we see in April,” Spieth said.

He played the front nine on Monday, and when he finished his round with former champion Zach Johnson and newcomer J.T. Poston, he noticed a huge difference in how the ball responds if it comes up short.

“Sometimes it rolls back 20, 25 yards short of the green,” Spieth said. “Right now, it's only going to go 5 or 10, making the next shot a bit easier. It will be interesting to see how that changes because that changed a lot from this weekend to today.”

Spieth was around on the weekend after missing the cut in the Houston Open. Ditto for players like Phil Mickelson and Lee Westwood. No one likes a weekend off. When it means going to Augusta National to get ready for the Masters — April, November, doesn't matter — it takes the sting off.

On this day, it was a walk in the park. Or it felt like one, anyway.

“It takes some getting used to,” Westwood said.

What hasn't changed is the objective.

“We're playing the same golf course and trying to shoot the low score and beat the same players that we have to try and do every single year,” Spieth said.