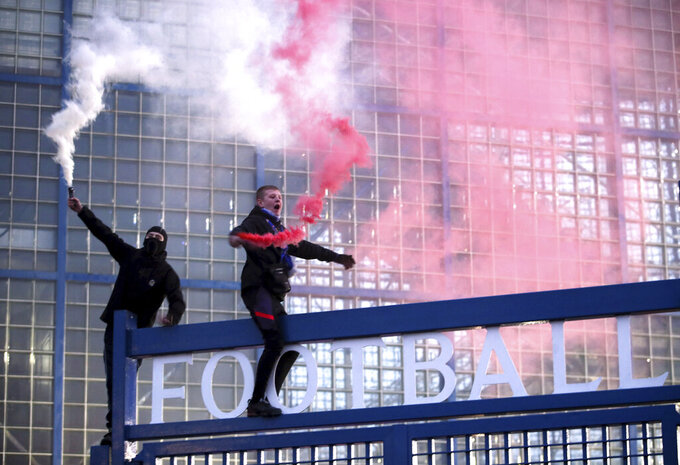 GLASGOW, Scotland (AP) — Rangers won its first Scottish Premiership title in 10 years on Sunday to complete its recovery from financial implosion and being forced to start again in the fourth division.

A world record 55th domestic league title — although some rivals will claim it is the reborn club's first — was sealed after Glasgow rival Celtic drew 0-0 with Dundee United.

The pandemic-defying fan celebrations outside Ibrox began the previous day as Rangers beat St. Mirren 3-0. Now Steven Gerrard’s side has an unassailable lead of 20 points with six games to spare.

Celtic has dominated since Rangers was demoted to the lowest professional league in 2012 but has now been prevented from winning the title for an unprecedented 10th straight season, and for a 52nd time overall.

It is the first league title ever won by Gerrard, who spent most of his playing career at Liverpool. Gerrard came agonizingly close in 2014 to finally landing the one club prize that eluded him: The Premier League title. Adding to the anguish, Gerrard’s own slip against Chelsea contributed to a 2-0 loss that ended up costing Liverpool the title as Manchester City emerged victorious.

After seeing out the final two years of his his playing career at the Los Angeles Galaxy, the midfielder retired from playing in 2016 and embarked on his coaching career with Liverpool's youth teams.

Gerrard made the step up to first-team management in 2018 when he was hired by a Rangers side in the doldrums after being thrashed 4-0 by Celtic in a Scottish Cup semifinal. It has taken three years for Gerrard to restore Rangers to its once-customary position as champions of Scotland.

It has been a tumultuous journey back to the summit:

Manager Ally McCoist saw millions of dollars worth of talent walk away for free as llan McGregor, Steven Whittaker, Kyle Lafferty and Steven Naismith opted not to transfer their contracts to the club that emerged from liquidation. Forced to throw together a squad of journeymen, the team comfortably sealed the first leg of their journey with promotion to the third tier.

Only six points were dropped as Rangers strolled to the League One title but things were much rockier behind the scenes as chief executive Charles Green went head to head with McCoist in a public row before being forced to sell his shares to Greenock tycoon Sandy Easdale. There were further embarrassing results as the Light Blues crashed out of the League Cup to Forfar and suffered defeat to Raith Rovers in the final of the Challenge Cup.

More boardroom wrangling saw Newcastle owner Mike Ashley emerge as the main Ibrox power broker before he and his Easdale-fronted board were eventually ousted by Dave King. However, the King coup came too late for McCoist, who had been placed on gardening leave after a series of fall-outs with the ruling regime. Stuart McCall was brought back to salvage their title bid but Rangers finished third and lost in the playoffs.

Rangers looked to have finally got its house in order as new manager Mark Warburton transformed the Ibrox squad and implemented a slick new passing style. His side strolled to the Championship crown and dumped Celtic out of the Scottish Cup semifinals on penalties. But there was another bleak day in the final, with Hibernian snatching victory.

Rangers unveiled a huge display declaring they were ‘Going for 55’ as they made a topflight return. Warburton added the experience of Joey Barton, Niko Kranjcar and Philippe Senderos but they were outclassed in an early 5-1 defeat by Brendan Rodgers’ Celtic. Warburton was fired in February with youth coach Graeme Murty placed in temporary command. Pedro Caixinha was then brought in but he could not prevent Rangers experiencing two more humiliating defeats before finishing third.

Rangers’ return to the Europa League ended in a loss to Progres Niederkorn of Luxembourg. Caixinha only lasted until October when Murty was again called in to take temporary charge. Things appeared to be going well under the former Reading defender for a spell but a 3-2 loss to 10-man Celtic in March saw the wheels come off again and he was stood down, with Jimmy Nicholl taking charge of the final three games of the season as another third-placed finish beckoned.

A new era dawned as Gerrard was hired and he made an immediate impact, leading the club into the Europa League group stage but his side’s title challenge faltered after the winter break and they finished nine points adrift of Celtic.

Further work was done to restore Rangers’ reputation as Gerrard’s side marched into the last 16 of the Europa League. But again he faced big questions as his side folded under pressure. Celtic clinched victory in the final of the League Cup and streaked 13 points ahead before the lockdown forced the premature end to a season which also saw Rangers lose to Hearts in the Scottish Cup.

Celtic was favourite ahead of a season in which their fans expected them to clinch a Scottish record 10th consecutive title, but Rangers took firm control of the title race following victory at Parkhead in early October and never looked back. Celtic could have briefly delayed the celebrations by winning at Dundee United on March 7 but a goalless draw sent the title back to Ibrox.