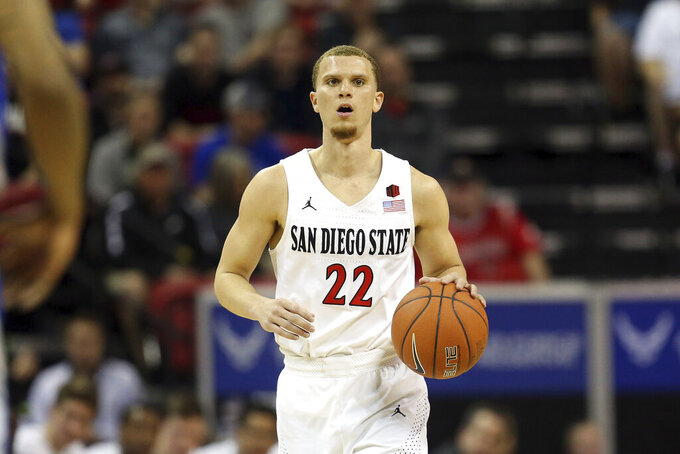 FILE - In this March 5, 2020, file photo, San Diego State's Malachi Flynn brings the ball up against Air Force during the second half of a Mountain West Conference tournament NCAA college basketball game in Las Vegas. Flynn was selected by the Toronto Raptors in the NBA draft Wednesday, Nov. 18, 2020. (AP Photo/Isaac Brekken, File)

“I’m just grateful. It’s a moment I’ve been waiting for for a long time,” said Flynn, the youngest of seven children. “Just enjoying it with my family, it felt real good.”

Flynn began his college career with two seasons at Washington State before playing his junior season with the Aztecs. He averaged 15.8 points per game in his final season with the Cougars, and boosted that to 17.6 points as a junior, adding 5.1 assists and 4.5 rebounds.

“Obviously had a really successful season, won a ton this year,” Raptors general manager Bobby Webster said. “He’s a modern NBA point guard. He can kind of do it all on the offensive end.”

With the COVID-19 pandemic preventing teams from evaluating players as extensively as in years past, Webster and the Raptors chatted with Flynn over Zoom before traveling to Las Vegas to see him in person. Each time, Toronto liked what it saw.

“Going out to see him in Las Vegas helped us have that face-to-face, and some familiarity with who he was, how he carried himself, the energy he gave off,” Webster said. “He’s a serious kid, he’s professional, he’s about the hard work, he’s about winning.”

Flynn also felt positive about the connection forged in that Vegas meeting.

“I felt like I had a good workout,” he said, “but then after just talking to them a little bit, just kind of showing who I am and getting a feel for them, I think it kind of clicked. Two weeks later, they draft me.”

Toronto last picked in the first round in 2017, when it chose forward OG Anunoby 23rd overall.

Like Flynn, Harris split his college time between schools, starting with two years at Louisiana Tech but transferring after averaging a team-best 15.3 points as a sophomore. Harris came up big in 33 games with the Wolf Pack, averaging 21.7 points, 6.5 rebounds and 3.9 assists.