Refugee defector from Iran to face Iranian at Tokyo Olympics 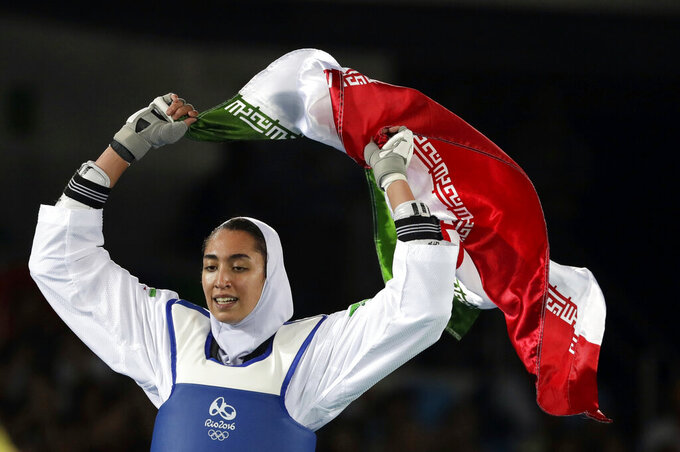 FILE - In this Aug. 18, 2016 file photo, Kimia Alizadeh Zenoorin of Iran celebrates after winning the bronze medal in a women's Taekwondo 57-kg competition at the 2016 Summer Olympics in Rio de Janeiro, Brazil. The defector from Iran who left citing institutional sexism will face the Iranian in the opening bout of their taekwondo class at the Tokyo Olympics. The draw Thursday, July 22, 2021, for the women’s 57-kilogram class placed Kimia Alizadeh of the refugee team against Nahid Kiyani Chandeh of Iran. (AP Photo/Andrew Medichini, File)

TOKYO (AP) — A defector from Iran who competes in taekwondo for the refugee team at the Tokyo Olympics was drawn on Thursday to face an Iranian opponent in the qualifying round.

Alizadeh was the first Iranian women to win an Olympic medal when she took bronze at the 2016 Rio de Janeiro Games when she was 18. She later criticized wearing the mandatory hijab headscarf, which she had to wear in Rio, and left Iran to live in Germany.

“I have a great feeling to have made a decision for my life that would definitely change my future,” she said last year in Germany.

The two-time world championship medalist and 2014 Youth Olympics champion needed an invitation to join the 16 athletes who qualified for the 57kg featherweight category at the Tokyo Games.

The extra entry made an odd-numbered lineup, requiring a qualifying round to advance to the main bracket. The draw landed Alizadeh against an opponent from her former country.

The winner at the Makuhari Messe near Tokyo will advance to the round of 16 and face defending champion Jade Jones of Britain less than two hours later.