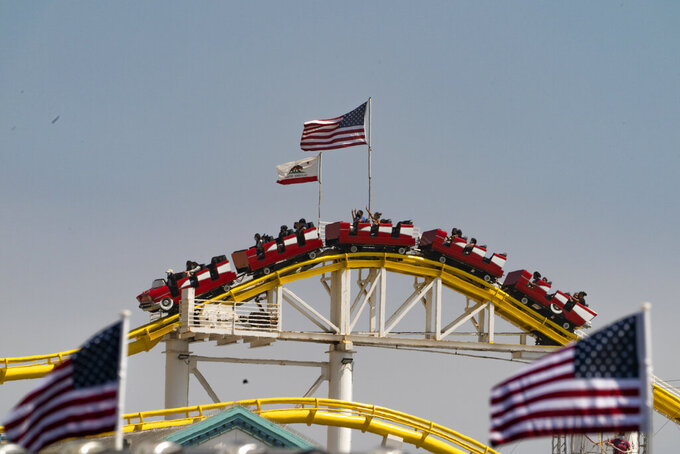 People ride the rollercoaster at Santa Monica Pier in Santa Monica, Calif., Saturday, May 29, 2021. Californians are celebrating the Memorial Day weekend, more upbeat than they have been for any other holiday since the pandemic began thanks to dramatically lower virus cases and increasing vaccinations. (AP Photo/Damian Dovarganes)

SAN FRANCISCO (AP) — At San Francisco's waterfront, the sea lions are attracting a steady stream of tourists. In Santa Monica, the parking lot to the beach and amusement park quickly filled up. Meanwhile, many campgrounds, restaurants and hotels say they're fully booked.

Some business owners say they have more customers than they know what to do with.

“Five months ago, we were trying to squeeze water out of rocks,” Hunt Bailie, owner of Sonoma Adventures bike rentals and tours in Sonoma, told the Press Democrat of Santa Rosa. “Now we’re drinking out of a fire hydrant.”

Californians are celebrating the sunny Memorial Day weekend more upbeat than they have been for any other holiday since the pandemic began, thanks to dramatically lower virus cases and increasing vaccinations.

“It’s not over yet but we’re getting busier and busier,” said Kenneth Hansel, manager of the Fog Harbor Fish House restaurant on San Francisco's Pier 39. “Every time we reopen, we've been profitable a month later. That tells you we're going to be really busy in the months ahead."

Businesses in wine country either have their reservation lists filled or they are anticipating a big holiday crowd.

Crista Luedtke, owner of a hotel and spa and three restaurants in Guerneville, told the Press-Democrat she has had to limit the number of nights her eateries are open because she can't find enough people to work.

“Now that the restrictions have lifted, people are anxious to get out,” she said.

California was the first state to issue a statewide shutdown as the virus emerged in March 2020 and it was the nation’s epicenter for the disease at the start of 2021. More than 61,000 people have died from the virus in California, the most in any state in the nation.

On some recent days, newly reported infections in California have fallen below 1,000 and there are currently just over 1,300 people hospitalized with the virus. The state’s positivity rate is just 1%.

Lifting restrictions will inevitably result in some increased transmissions, but health officials say the health care system should be able to handle them. Dr. Mark Ghaly, the secretary of California Health and Human Services, said health officials will continue tracking whether virus mutations start breaking through vaccinations, which he said could mean renewed health measures.