Reynolds, Odunze receive US call-ups but not Hoppe 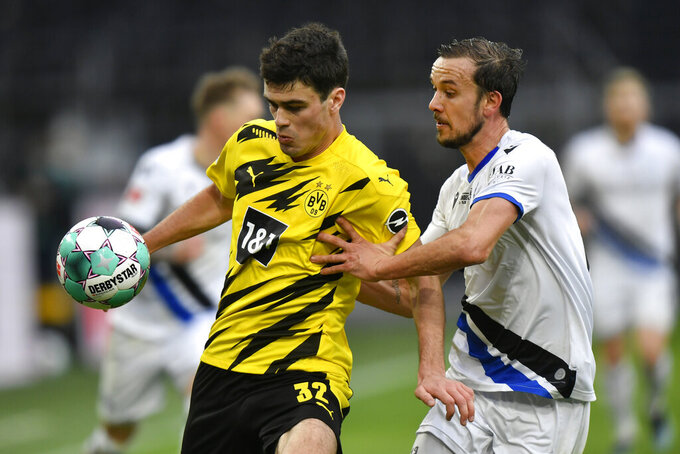 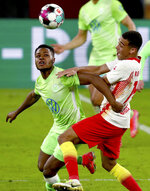 CHICAGO (AP) — Defender Bryan Reynolds received his first call-up to the U.S. national team after the 19-year-old made his debut for Roma last weekend.

“He made a big step," U.S. coach Gregg Berhalter said Wednesday. “He's a player that we really think has big potential, obviously making his debut at such a young age in Serie A for a big club like Roma is monumental, and it will be great to see him up close."

Chituru Odunze, an 18-year-old goalkeeper with Leicester, also could debut in exhibitions against Jamaica on March 25 at Wiener Neustadt, Austria, or three days later at Northern Ireland. Both games will be played without fans because of the novel coronavirus pandemic.

Defender Reggie Cannon is scheduled to return to his clubs after the match against Jamaica along with Germany-based players, a group that includes defenders John Brooks, Reggie Cannon and Chris Richards, midfielder Tyler Adams, and forwards Gio Reyna, Josh Sargent and Tim Weah.

Because Josh Sargent is likely to play 90 minutes against Jamaica and the Germany-based group must leave, U.S. coach Gregg Berhalter decided not to select 20=year-old forward Matthew Hoppe, who has scored five goals for Schalke this season, for a possible debut.

”I had discussions with him, and I talked about his progress at Schalke," Berhalter said. “I talked about some of the things we really like with him and I also told him that we’re going to continue to monitor him and hopefully get a chance to look at him before the World Cup qualifiers start."

Jordan Siebatcheu, a 23-year-old forward with Rennes eligible to play for the U.S. and France, was not picked because he would have had issues traveling to Britain during COVID-19 restrictions, according to Belhalter.

Forward Jordan Morris had surgery March 10 to repair a torn left ACL sustained while on loan for Swansea last month,

“Luca is a great story, a great story of a guy just being patient, finding a level that he can compete at week in and week out," Berhalter said of the 22-year-old midfielder, who joined Heracles Almelo in the Netherlands this season after sparse use in four seasons with Fulham.

Pulisic got his first start for Chelsea last weekend since Thomas Tuchel replaced Frank Lampard as manager on Jan. 26.

“Any time you get a new coach, it’s about re-establishing himself. and that’s completely normal," Berhalter said. “I've had some good conversations with their coaching staff, some conversations with Christian, and we're confident he's going to get to where he needs to get to. Their coaching staff has a lot of faith in him, a lot of trust in him and now it’s just about giving him the opportunity to show it on the field."

The U.S. has played just two matches with a full-strength roster since the start of the pandemic: a 0-0 draw at Wales and a 6-2 win over Panama in Austria, both last November.

Eighteen-year-old midfielder Yunas Musah, who debuted for the U.S. in November, was included after committing to the U.S. long-term this week.

“I think it’s a huge win whenever you can get a guy that good of a person and that much quality," Berhalter said. “He's such a fantastic kid. He endeared himself to the entire group when we were with him in November.”

The roster averages 11 international appearances and 23 years, 27 days in age as of the start of training camp on Monday, and 14 players have eight or fewer appearances. Sixteen players are 22 and under.

Berhalter said he advised 18-year-old LA Galaxy midfielder Efraín Álvarez, who is eligible for the U.S. and Mexico, to attend camp with El Tri ahead of friendlies against Wales on March 27 against Costa Rica three days later.

“He's been in our environment," said Berhalter, who included Álvarez in his training camp in November. “The only way for him to make an informed decision is to go into their environment. And we've always said that all we want to do is put the players in position to make the best possible decision they can make. And some players are doing to chose for us, and some players aren't going to chose for us. But when we talk about the emotion of the decision, we want to take some of that emotion out of it by letting him have objective data what environments are like to be able to compare."