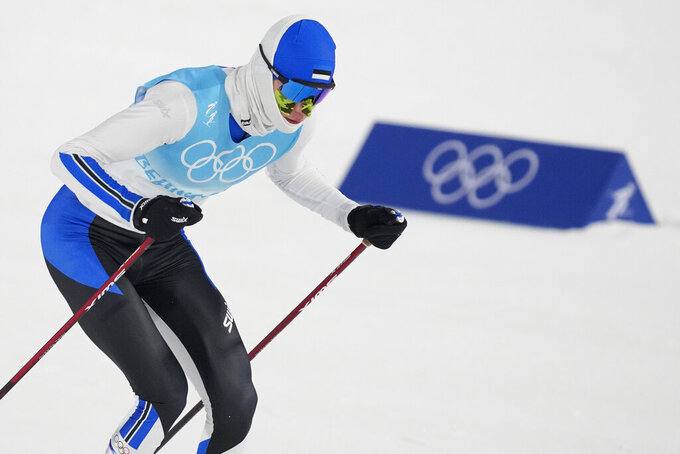 Norwegian favorite Jarl Magnus Riiber took the wrong turn early in the 10K cross-country race at the Olympics, a little more than 24 hours after coming out of isolation, and two teammates took advantage.

“Maybe it's not my Olympics," Riiber said.

Joergen Graabak of Norway made the most of the opportunity, winning gold in Nordic combined Tuesday.

Graabak rallied from a deficit of 2 minutes, 7 seconds behind Riiber at the start of the cross-country race to finish first after placing 12th in ski jumping.

“It’s what dreams are made of," Graabak said. “It’s unreal, to be honest. I can’t quite believe it."

Graabak became the first two-time Nordic combined Olympic champion on the large hill after winning the event in 2014.

“It was a bit of a surprise for me because I haven’t had any podium (finishes) this year so far in the World Cup,” Watabe said.

The athlete who jumps the farthest and impresses judges the most starts the cross-country portion of the Nordic combined event with a lead. The rest of the field follows, in order of the finish in ski jumping. The first to cross the finish line wins gold.

Riiber made a relatively surprising start, and a strong one, only one day after coming out of isolation that lasted longer than 10 days because he tested positive for COVID-19. He jumped 142 meters (466 feet) and had 139.8 points in the first phase of the competition. The impressive jump gave him a 44-second lead in the cross-country race.

The three-time world champion built a lead of one minute before making a costly mistake. Riiber made a wrong turn a few minutes into the race and that miscue cut his cushion to fewer than 10 seconds at the 2.5K mark.

“It’s a silly mistake,” he said. “It’s not fun to show the world that I maybe wasted a gold medal.”

Riiber wasn’t as familiar with the course as his competitors after being in isolation for so long. The Norwegian faded late in the race and finished eighth.

“It was more of a physical problem," said Riiber, who said he had bad symptoms for a couple days. “When I'm in normal shape, the mental part is normally there. I was not able to ski normal. I was feeling quite bad.

“I had been locked inside for two weeks, not breathing fresh air. My body is not working. Normally, I'm one of the better skiers and today I was just bad."

The field had to compete in brutal conditions, with temperatures dipping to minus 18.7 degrees Celsius (minus 2 degrees Fahrenheit) with wind that made it feel even colder at a challenging elevation of 1,665 meters (5,462 feet) on a course with steep inclines.

“It was one of the hardest races of my career," Watabe said with icicles dangling from his eyelashes.

Top-ranked Johannes Lamparter of Austria had a slim lead at the 7.5K mark, but ended up in sixth.

Vinzenz Geiger of Germany won the Nordic combined event last week, rallying from a deficit of 1:26 in the cross-country race, and placed seventh on Tuesday. Kristjan Ilves of Estonia, who also was in isolation after testing positive for COVID-19, started the cross-country race second and finished ninth.

Three-time Olympic gold medalist Eric Frenzel of Germany is out of isolation and the team is hopeful he will be able to compete Thursday in the Nordic combined team event.

American teammates Jared Shumate (17th), Ben Loomis (19th) and Jasper Good (34th) finished roughly where they started the cross-country race. Taylor Fletcher (23rd) made up some ground with strong skiing after starting 35th out of 48.