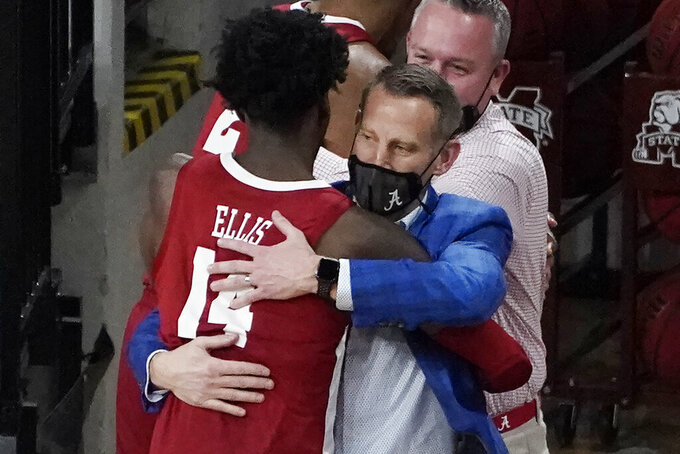 Alabama coach Nate Oats didn't inherit nearly the same kind of rebuilding task as Auburn's Bruce Pearl, but he has sure made quick work of it.

After a few years of being overshadowed by its rival from across the state, the eighth-ranked Crimson Tide is now enjoying a comparable level of success in Oats' second season.

Alabama (19-6, 14-2 Southeastern Conference) has already secured its first league title since 2002 entering Tuesday night's game with the Tigers (12-13, 6-10), who have struggled with a young team.

“I thought we could compete for championships,” said Oats, who has already received a raise and three-year contract extension. "I didn’t know that we’d actually win one in Year 2. That would be a little bit of a bold statement going in.

“It would have been a little bold even at the end of last year, to be honest with you, after we finished 8-10. Internally we talked about winning it. I certainly wasn’t going to talk about it externally.”

Alabama secured the title with Saturday's 64-59 win over Mississippi State.

Plus leading scorer Jaden Shackelford, a sophomore who had already been signed by Oats' predecessor, Avery Johnson.

The Tide figures to be a high seed in only its second NCAA Tournament since 2012. And this time Auburn will be the spectator, amid a down season that rendered moot a self-imposed postseason ban stemming from a bribery scheme involving former assistant coach Chuck Person..

In 2014, Pearl took over a team that hadn't been to the NCAA Tournament since 2003. The Tigers made it to their first Final Four in 2019 and were on their way to a third straight NCAA tourney before the last postseason was canceled because of the coronavirus pandemic.

Pearl said “there's no comparison” between the talent level he and Oats inherited. But the Tide coach has filled out his roster with important pieces, and Pearl says he isn't surprised by the quick turnaround in Tuscaloosa.

“I’ve said it before and I don’t mind saying it because I paid Nate great compliments, but he inherited a good roster, a very good roster,” Pearl said. “And he’s done a phenomenal job with that roster, and he’s added some incredible pieces.”

Players like those three seniors have flourished in his fast-paced system this season, especially. The defense in particular has improved. And so, Oats said, have those seniors.

And that involves plenty of 3-pointers from a variety of players. No Division I team had attempted more than Alabama's 755 3s entering this week, and only Toledo has made more than the Tide's 268.

Petty's 59 3s lead the league, while Quinerly and Primo are both among the SEC's top 5 in percentage made. Petty is 11th.

Alabama also is second in the SEC in rebounds per game, leading Pearl to proclaim: “I mean, they just don’t have any weaknesses.”

And he's familiar with the success one can attain with that offensive playing style.

“We went to the Final Four spreading it and shooting it,” Pearl said.