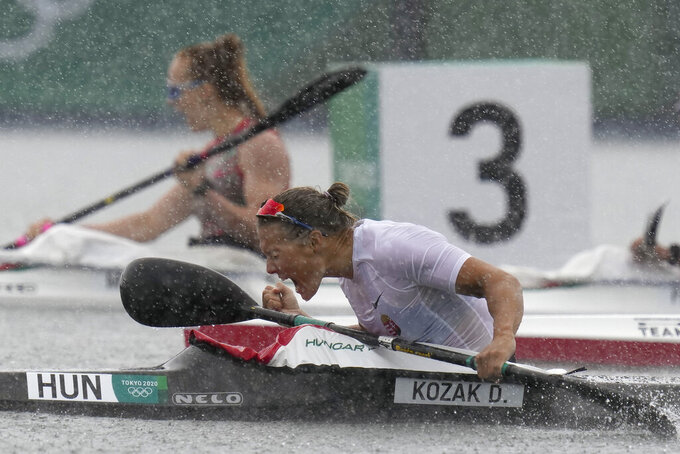 And Serghei Tarnovschi of Moldova, who was stripped of his bronze medal in 2016 because of a positive doping test, benefitted from the yearlong delay caused by the coronavirus pandemic to return to the Olympics and win another medal. His four-year suspension ended in time for him to qualify in May.

Rauhe became the first man to win a medal in the sport in five Olympics when Germany won the men's kayak 500 meters, the final sprint race at the Sea Forest Waterway. Germany edged Spain by 0.226 seconds.

The gold medal was the second of his long career to go with two bronze and a silver.

And at age 39, Rauhe is the second-oldest man to win a canoe sprint gold medal. Only Gert Fredriksson of Sweden was older at 40 in 1960. Rauhe had originally planned to retire in 2017 but returned when the Olympics dropped the men's four 1,000 and replaced it with the 500.

Now Rauhe can paddle into retirement for good.

“When I was in front I was clear that it was my last stroke here, so it was just a perfect ending, a perfect last stroke for me," Rauhe said. "To finish with a gold medal, it is like I have it in my dreams, so I’m really good now to finish my career.”

Carrington had already blazed through the Tokyo Games with three gold medals in the women's kayak single 200 and 500, and the double 500, to raise her career tally to five, with six medals overall.

But her quest to become the first paddler to win four canoe sprint gold medals in one Games ended in the kayak four 500 when the Kiwis faded from medal position over the second half of the race to finish fourth behind Hungary, Belarus and Poland.

"We were just fighting the whole way and that is what we were out there to do: Do the best we can and put it all on the water,” Carrington said.

Isaquias Queiroz dos Santos of Brazil won the men’s 1,000-meter canoe sprint ahead of silver medalist Liu Hao of China, the 2019 world champion. But all eyes were on Tarnovschi and his late burst to pass Adrian Bart of France for the medal.

Tarnovschi returned to the medal podium five years after his similar result in Rio de Janeiro was stripped because of the performance-enhancing drug violation. He had acknowledged earlier in the week that the pandemic delay worked in his favor.

“It means everything. I didn’t believe I could get this result because this competition is a higher level than in Rio," Tarnovschi said.

Mengya Sun and Shixiao Xu of China got the country’s first medal in women’s canoe sprint by winning the gold in the canoe double 500. The 2019 world champions finished 2 seconds clear of Anastasiia Chetverikova and Liudmyla Luzan of Ukraine. It was the second medal for Luzan, who took bronze in the single 200.